It’s all about them. As usual. 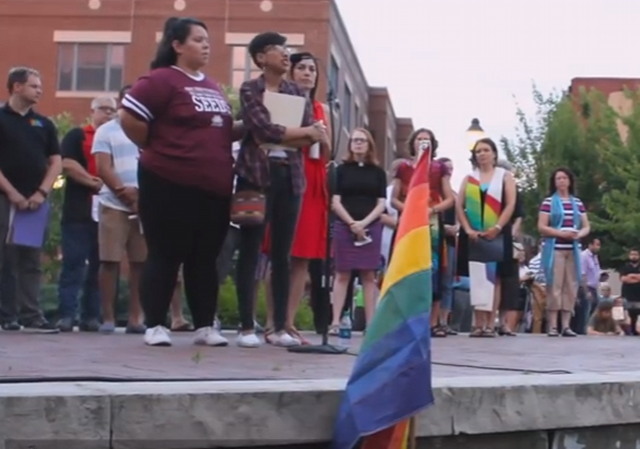 In another banner moment for the University of Missouri, student race activists hijacked a vigil for the victims of the Orlando terror attack this week.

A vigil Monday planned by several University of Missouri student organizations was supposed to honor victims of Sunday morning’s deadly shooting rampage in a popular gay nightclub in Orlando, Fla.

It turned into a blame session against Mizzou’s LGBTQ community for not being intersectional enough.

Latino activists, including a Mizzou official, scolded the mostly white gathering for ignoring racial issues. That led one attendee to fume on Facebook that the organizers had invented a “race issue” out of a “homophobic attack” by gunman Omar Mateen.

The attack on the Pulse nightclub took place on Latin night, with most victims Latinos in their 20s and 30s.

At the event outside the Boone County Courthouse in Columbia, Mizzou graduate and activist Tiffany Melecio chastised the crowd for putting the interests of the LGBTQ community above those of “people of color.”

“I wish this many people came out to our racial demonstrations and our Black Lives Matter movement,” Melecio told the crowd, which The Columbia Missourian estimated at more than 800.

“Those are things you don’t consider when you are white or when you are an American,” said Melecio, a former staffer for the Missourian. She recalled fumbling over Spanish, her non-native language, when she came out as bisexual to her Spanish-speaking mother from Guatemala. Her family is Guatemalan and Puerto Rican.

“I’m tired of the black and white dichotomy we hear when we talk about race,” Melecio said. “We never take the time to talk about the shades [of skin] in between – like mine.”

What a damn disgrace. The University of Missouri should be ashamed.

Matt Vespa of Townhall knows what I’m talking about:

What is with this school? The University of Missouri seems to be a breeding ground for unhinged progressives, who appear to have turned a vigil remembering the victims of the Orlando attack into some weird lecture about race. The College Fix had the details concerning what Mizzou graduate and activist Tiffany Melecio said before addressing the diverse crowd, namely how she was nervous getting up on stage because of all the white people in attendance.

“I was really nervous to get up here because there’s a lot of white people in the crowd, and that wasn’t a joke,” she said…

These people cannot help themselves. That arc of history must always be detailed, and they must always show that they’re supposedly on the right side of it.

It’d be a real shame if Mizzou’s current enrollment problem led to the school’s closure.

Do you think we can get Jane Sanders to sign on as school president?

Grow up snowflakes! It’s not about you!

Victim v. victim, with whole new classes being invented almost daily. This is what the Frankfurt School dreamed of! A balkinized West.

These BLM people want to be more of a victim than the queer people. I don’t know of anybody in their right mind who actually wants to be a victim. Why don’t we all surrender our guns to the government. Then we’ll all see what being a victim really is.

Tiffany has a tiff over how Black lives matter can’t draw as many people as a memorial for 49 people murdered in Orlando. And Black lives matters (started by a white guy) really, really matters you must understand.
It kind of reminds me of the “principled conservatives” reactions when The Donald came in & snaked the conservatives year nomination out from under their preferred candidates backside. They too were upset when all the attention & voters went with this “unprincipled” outsider who isn’t even that conservative.
Which tended to expose the participating voters weren’t all that into what the “principled conservatives” had been selling or assuming all these years. As with Black lives matters when the truth finally does come out it can be upsetting.

I do not support legalizing drugs, for obvious reasons.

“I’m tired of the black and white dichotomy we hear when we talk about race,” Melecio said. “We never take the time to talk about the shades [of skin] in between – like mine.”

No sh!t. I am tired of it too, because I know something that these miseducated children do not. We do not need to talk about skin color because it is by no means the most important factor in building a happy life. We are all in this, together, and we are all, every one of us, capable of building a happy life, because we live in America, where the laws protect the rights of each and every one of us.

There is always going to be somebody who decides to dislike you. It might be your skin color, religion, accent, the color of your hair or eyes, or the school you graduated from, or no reason at all. It happens to everybody, very much including white males. People can and will do that. What they cannot do, is stop you. Regardless of what some negative, fake big shot thinks, you can have a full measure of success and happiness, because you do not have to associate with jerks, after you figure out a person is a jerk.

So, who has been teaching these kids to whine and given them a case of learned helplessness?

“So, who has been teaching these kids to whine and given them a case of learned helplessness?”

This is a rhetorical question, right?

Good. The more they push, the more they discredit themselves and alienate potential allies.

These activists need to have a conversation with Elbert Guillory…

Except for Mizzou there is so little to laugh about.

Parents, if your child comes home and says they want to go to the University of Missouri, maybe you should say NO.

Will Global Warming™ melt all the college snowflakes someday?

I love it when the Left eats its own ~

I wonder if the Mizzou admissions and funding slide has continued. Frankly I’ll laugh my ass off if they cause the entire university to collapse financially. Maybe that will get through to people.

College needs to be blown up and start over.

Start doing mental health screenings and ask app questions about whether students can tolerate all ideas, not just their pet causes.