There is good in this world…. 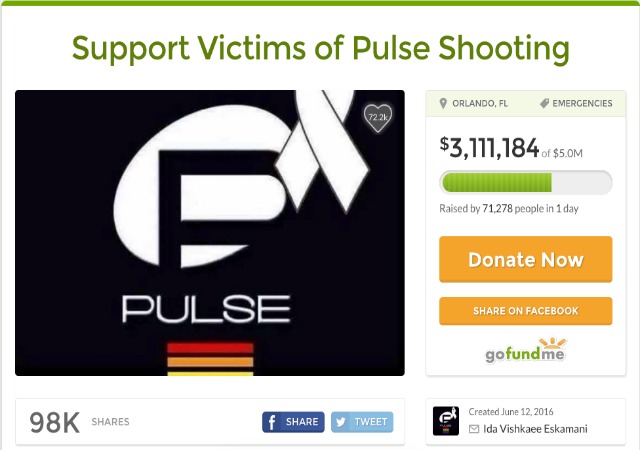 Equality Florida’s GoFundMe campaign has raised more than $3 million to help the victims and families from the pulse gay club massacre.

“We are beyond moved by the support from all corners of the world and all walks of life,” Equality Florida wrote. “We do not know the total costs for the victims of this horrific hate crime, therefore are working to raise as much as possible and disperse the funds as fast as possible.”

Omar Mateen murdered 49 people and injured over 50 at Pulse on Saturday.

Staff member Ida Eskamani told CNNMoney the organization will “make sure every penny raised goes to supporting these victims.”

“Our community and the rest of the world has spoken volumes by helping out, and it makes me feel less alone in a world where I’m not always accepted,” Star told CNNMoney. He added that he has promoted the fundraiser to his 2.6 million Instagram followers and 626,000 followers on Twitter. “It’s not about the dollar amount, it’s about being a decent person and standing up for human rights.”

You can donate here.

Shame to think that all that money is probably going to pay their exorbitant Obamacare deductibles. Good to hear there is some benevolence in this world.

Gee, we’ve been told what a hate filled, bigoted country we are and yet all this money got raised. Seem that somebody has it all wrong.

Great to see such a grand response in the time of need.

I am sure that money can help but what the people who lost someone are going through right now no amount of money can ease the terrible sense of loss and utter sadness.

Every American grieves with you Orlando.

Fear not, before it’s all over, someone will be going to the penitentiary for stealing significant amounts of those funds.

People are emotional.
I remember after 9/11 they raised many millions and there was a lot wasted or stolen. Also, few thought to raise money for military families devastated by the second plane which hit in DC. Giving money is nice, but not truly a sacrifice. And not as hard as changing yourself and working to change the world from the lessons learned from this event.

The media is working overtime to ensure the “lessons learned” focuses on guns not intolerance. Another easy “fix” that requires little from those caught up in it.

Apologies in advance for raining on anyone’s parade…

Reconciliation of moral and natural imperatives. It seems that people have the right order of priorities.

Im glad to see peoples compassion to donate and hope the money is place properly and not stolen as what usually happens. What bothers me is, everyone is almost worshiping this at the same time 1000s of babies died that day from Abortions and no one cares about that.