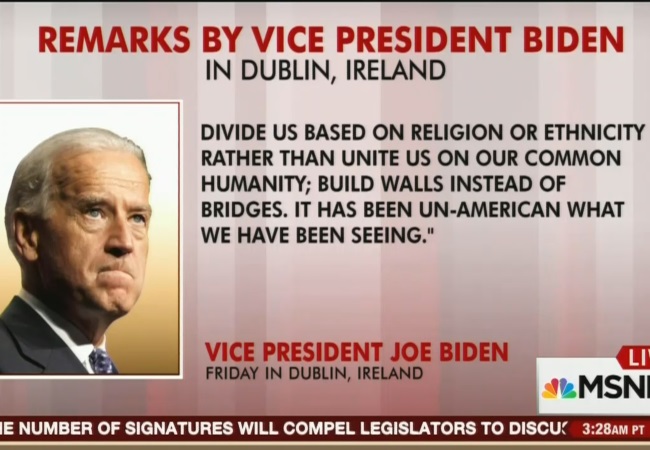 In my old liberal hometown of Ithaca, NY, back in the George W. era it seemed you couldn’t drive a block without seeing a “Dissent Is Patriotic” bumper sticker. But the night Barack Obama was elected, one imagined all across town earnest souls in their driveways, scraping those stickers off.

And so it is that Joe Biden, the Vice-President of the United States, traveled to Ireland to imply that Donald Trump is ‘un-American.” For good measure, when it comes to illegal immigration, Biden proclaimed a preference for “bridges” over “walls.” Think about that.

To be sure, Biden didn’t mention Trump by name. But as Joe Scarborough said after the clip aired on today’s Morning Joe, Biden’s reference to Trump was not merely “veiled,” but “thinly veiled.”

So is that the new liberal standard: Dissent Is Unpatriotic? And is that Hillary’s plan for shovel-ready projects: new bridges across the Rio Grande to make influx easier for illegal immigrants, or, as per the phrase we like, “undocumented Democrats?” Bill Clinton’s old campaign slogan was “building a bridge to the future.” Is Hillary’s “building a bridge to a future of illegal immigration”?

JOE BIDEN: We see, in my home country, where some politicians find it convenient to scapegoat immigrants instead of welcome them. To play to our fears, to play to our fears rather than as Abraham Lincoln said, appeal to our better angels. Divide us based on religion or ethnicity rather than unite us on our common humanity. Build walls instead of bridges. It has been un-American, what we have been seeing.

In the immortal words of that Oscar winning Rabbit – “What a maroon.”

Illegal immigrants, com’n in–as long as all “paths” lead to Biden’s front yard. Like the Hotel California, once they come in, they can never leave. Enjoy it, Joey.

I worked in Ireland for a while. I’ll bet they sucked up Joe’s bullshit like a sponge. They love looking down on American social ‘injustice’. Now they’re getting loads go Nigerians et al so let us know how that works out.

“Divide us based on religion or ethnicity rather than unite us on our common humanity.”

Therein lies the problem.No one is saying anything about ethnicity. A person’s color, race or gender are not the issue here and this moron knows it. There is only ONE troublemaker in the world today and everyone knows what it is. It is called islam! There is no race, gender or color tied to islam but there is a culture of nonunity with any other group if they happen to be non-believers. Nothing Biden said makes the least bit of sense. All this idiot has to do is to go into any muslim dense area of the US to see that they have established a small part of the terrible culture they escaped from. They do not assimilate nor do they follow our cultural traditions. They offer nothing to the citizens around them and remain isolated from the rest. If you believe that all immigrants come here out of a desire to become Americans then you have to reject any muslim who follows sharia law.

This from the same guy who told black supporters that Romney/Ryan would “put y’all back in chains.”

Well, there’s already 28 border crossings just in Texas alone, 25 of which are bridges. But sure, Joe, whatever you say.

It is not un-American to protect the nation from aliens who not just hate America but wish it gone by rioting and burning the national flag. I guess it won’t be long before the Left demand that the Statue of Liberty be torn down because it oppress women and if patriotic.

Why do Democrats act like American doesn’t deserve to be a nation.

Here’s one American who doesn’t agree at all with Biden. We have laws about who gets to come in, follow them PLEASE. And no bridges so people can walk in. Follow the LAWS!