BDS supports government boycotts, but only against Israel 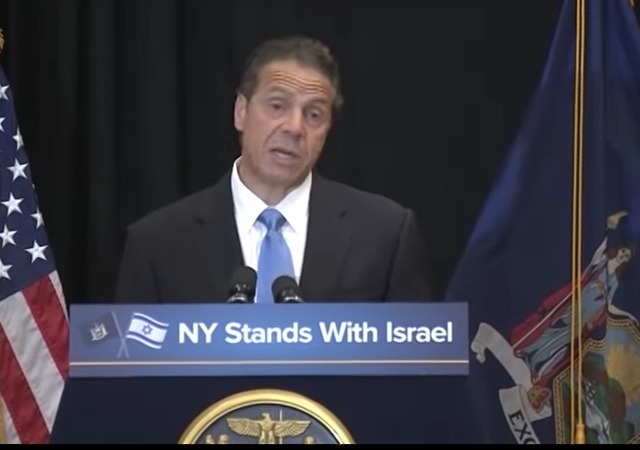 Leftist media and BDS supporters have railed against New York Governor Andrew Cuomo’s executive order that will not allow state agencies to engage with businesses that participate in the Boycott, Divestment, and Sanctions movement (BDS) against Israel.

They have thrown around typical scare words like “blacklist” and “McCarthyism” while praising a “grassroots” movement meant to economically deprive America’s lone ally and stable nation in the Middle East.

But as Eugene Kontorovich, law professor at Northwestern points out, the blacklist label does not apply because the government uses these lists against Iran and Sudan:

Can't operate divestment law w/out knowing who to divest from. Would you prefer a secret list @BenjaminNorton? https://t.co/6qKhF1j2hp

Claim that such laws "unprecedented" ignores fact that MOST divestment laws do this. No other way to do it, really https://t.co/MHZA9NtiSn

He did say a few parts raise first amendment problems:

Cuomo antiBDS exec order applicatoin to those who "promote others to engage in any activity" raises 1st Amend probs https://t.co/4tUCd2xEUv

The Exec Order does not just go after discriminatory business conduct ("activity") but also advocacy of activity by others. A bridge too far

The answer to these laws is in the language. From Haaretz:

He distinguished between biased speech and activity. The new legislation “is not about the viewpoints a company holds. This is about discriminatory activity. A company can hang a banner saying ‘long live Palestine, out with Israel,’ and if it’s not actually engaging in discriminatory conduct” by boycotting Israel, then it’s fine, he said. “None of these statutes prohibit any speech by anyone,” said Kontorovich. “But when a state deems certain conduct discriminatory, even if it’s not illegal, they can say they don’t want to contract with it.”

Basically, BDS supporters are ticked because the state does not want anything to do with their boycott. The New York Civil Liberties Union called Cuomo’s order a “blacklist” and said he want to punish people based on political views. Yet, Marc Stern, general counsel to the American Jewish Committee (AJC), said all of these people shouldn’t worry about the Constitution:

“Government is not required to subsidize activities with which it disagrees. I doubt the NYCLU would object if the principle was not to invest in a company that didn’t allow transgender people to use whatever bathroom they chose.”

Palestine Legal said the first amendment covers boycotts, but did not mention that would obviously cover New York’s right to boycott businesses they do not want to associate with.

Peggy Shapiro, who works as the Midwest regional director for StandWithUs, points out that states have a lot in stake with Israel:

Anti-BDS bills take different forms; some mention Israel directly while others do not, instead more broadly referencing boycotts of “American allies.” Some are aimed at state government pension investment funds, and others at any company with which the state or municipality does business.

“States do tens of millions of dollars of business with Israel,” said Peggy Shapiro, the Midwest regional director for StandWithUs, which is heavily involved in advising on proposed legislation. States have “joint ventures, medical research, trade import/export with Israel. Lots of jobs are at stake,” she said.

But this isn’t the first time these people have whined about people boycotting their boycotts. Professor Steven Salaita did not receive employment at the American Indian Studies Department at University of Illinois at Urbana-Champaign over an anti-Semitic Twitter rant that lasted over a month. Those at Illinois demanded a boycott of the university, but only found that it damaged themselves in the end, leading to dismal enrollments in the Humanities and Social Sciences department.

Guess which departments around the country already face hard times without these boycotts? Humanities and Social Sciences.

These pro-BDS professors found out the hard way what happens when you take these positions. Professor Susan Koshy at Illinois wrote expressed what she went through:

For someone like me, who is inside the university and supports Salaita, the boycott [of UI-UC] represents an experiential impasse. I find myself in the impossible position of being the target of a boycott as a member of an institution whose actions I and many others here have challenged. Unlike faculty members outside Urbana-Champaign whose safe target is another university, our target is our own. The frequently repeated joke here—How do we boycott ourselves?—captures this problem. How do you oppose your own institution yet protect valuable parts of it at the same time?

Being inside a boycott has forced me to think hard about the nature of this political weapon, not because I oppose its use but because I have come to see the difficulty of using it with the care it requires. A boycott whose target is a university—particularly one where the faculty has challenged the decision that led to the boycott—carries serious responsibilities for its supporters.

And it’s shown once again, the left thinks the gov’t should pay for everything they want in life, including paying for their free speech. Pro – BDS are a bunch of idiots but it takes a special kind of stupid to say it’s gov’t suppression of 1st amendment to not pay for their speech.

Funny, all these complaining voices have been so silent about the attacks on those calling-out the “Climate Change” AGs when they were going after those that challenged their religious orthodoxy.

…. apartheid. It seems that there is little interest to engage in yet another social justice-inspired disaster.

An important distinction has to be kept in mind:

1. Boycotting all Israeli companies, or just all Israelis, is illegal for pretty much any entity bigger than a few people.

2. Boycotting the Israeli government is perfectly legal, but states don’t have to do business with you if you do that.

3. Advocating a boycott, either of the Israeli government or of all Israelis, is definitely protected by the first amendment, as is all advocacy for any cause whatsoever.