Farage indeed gets the last laugh at the EU parliament. 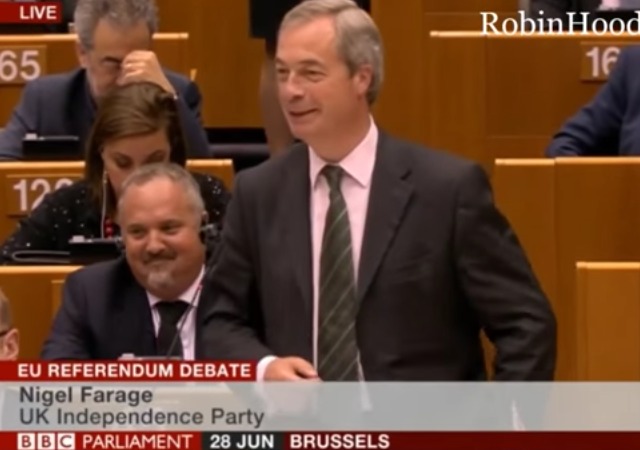 “Isn’t it funny. When I came here 17 years ago and I said I wanted to lead a campaign to get Britain to leave the EU, you all laughed at me but you are not laughing now,” Mr Farage told Members of the European Parliament (MEPs).

“You have imposed on them a political union and when the people in 2005 in the Netherlands and in France voted against you, you simply ignored them and brought the Lisbon Treaty in by the back door!” he told MEPs in an emergency debate on Britain’s Brexit vote.

The other members of parliament booed him when he had the nerve to ask them “to give Britain a good trade deal when it leaves.” He responded:

“Why don’t we just be pragmatic, sensible, grown-up, reasonable … and cut a sensible tariff-free deal?” he asked.

In a speech interrupted several times, Mr Farage warned: “The UK will not be the last member state to leave the European Union.”

It seems a tad odd that out of everyone in the room, Farage acted like the grown up. He told them they are in denial over their failing currency, which they booed, but he told the truth: €1 = £.82

The British pound collapsed right after the vote became official, but instead of the doom and panic people predicted, the currency has bounced back.

Look at the pair on that guy. Gotta love it.

My favorite part was where Farage said (paraphrasing) “Nobody sitting here has ever worked at a job, run a business, or hired people.” Batta Boom!

Angela Merkel … you magnificent bitch! I read the Time Person of the Year piece on you!

These Brits are taking their country back. Meanwhile, the USA is wallowing in a poo fight with CLUMP (clinton/trump).

You know, sometimes popular idioms can be really contradictory and confusing to use when showing agreement with someone.

Good example of winning the long fought battle… not giving up. The Dems know this, so was Mao’s “Long March”…. not the short term minor advantages that satisfy the establishment republicans.

The crying boehners care nothing about winning. Like malignant Soviet commissars, they simply want to make their dictator happy and keep their cushy posts.

He’s 100% right that if the EU behaves like an insulted child, and tries to punish the UK for daring to leave by refusing to conclude a free trade agreement with it, it will be cutting off its nose to spite its face. Or as I usually put it, it will be stabbing itself just so it can bleed on the UK’s clothes and ruin them.

Protectionism always hurts the country imposing it more than it hurts potential trade partners. That’s because, as Adam Smith explained 240 years ago, every country’s true interest is that of its consumers, whom trade restrictions hurt, not that of its producers, whom restrictions are supposed to help. We are all consumers of almost everything, whether directly or indirectly, but most of us are not producers of any given thing.

A smart country allows its people freedom of trade even if no other country does, just as it allows freedom of speech and of conscience even if no other country does. Letting our people buy things made in other countries isn’t a gift we bestow on those countries in order to persuade them to let their people buy whatever our fellow countrymen make; it’s primarily for the benefit of our own people, and that it also helps foreign manufacturers is just a bonus. If other countries let their people buy what our fellow countrymen make, that’s nice for us, but the main beneficiaries are their own consumers; if they don’t then they’re hurting their own people more than they hurt us.

PLUS, free markets are the only MORAL choice.

The Hobbits strike back.

Who would have guessed that the axis powers against us in World War III would be the American president, the GOPe, the European Union and Radical Islam?

“Those fools at the University laughed! Laughed! Mock my theories now! Bwah-hahahahahahaha!”