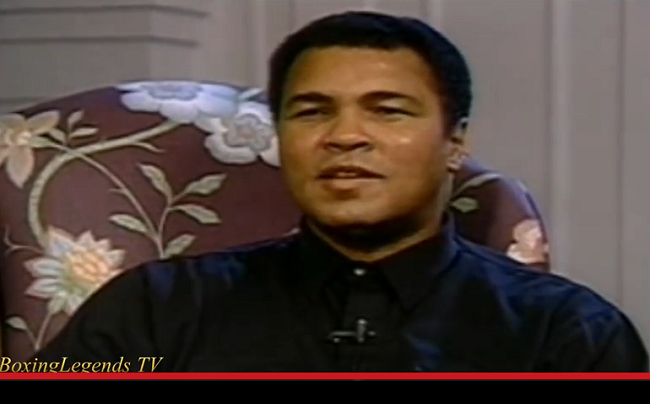 Muhammed Ali’s death is the sort of news that will be covered in the media for weeks, with tributes and reminiscences. He styled himself “The Greatest,” and boxing aficionados say that he certainly was one of the greatest, or maybe even the greatest, just as he had always claimed.

People like me, who never followed boxing and can hardly bear to watch it, still know a lot about Muhammed Ali, because he has been a huge celebrity and unique personality ever since he burst on the scene as Cassius Clay. Brash and talkative, he went through many transformations—his name, his women, his religion, the form his religion took (from racial- and anger-focused Black Muslim to more conventional Islam and a far more mellow outlook)—as well as the terrible transformation wrought comparatively early in his life by Parkinson’s disease.

Parkinson’s is a progressive disease, and Ali’s diagnosis came at the age of 42—although, looking back, his trainer Angelo Dundee thought he might have shown signs as early as the age of 38. It is commonly assumed that his Parkinson’s was the result of his boxing career and all the blows he took, and although that may be true it is not necessarily the case for Ali:

Dr. Fahn [the neurologist at Columbia-Presbyterian who originally diagnosed him] cannot be certain that Ali’s condition was indeed caused by boxing or if in fact Parkinson’s would have been his fate regardless of what career path he had chosen. An early Ali complaint of numbness in his lips and face, rendering him unaware of when food needed to be wiped away, indicated damage to the brain stem due to boxing, according to Dr. Fahn. But the steady progression of the disorder over the years, he adds, is more indicative of classic Parkinson’s disease. “The proof is only going to come at his autopsy,” Dr. Fahn says, “because the pathology is a little bit different between the two conditions.”

Ali’s last years sound as though they were very difficult and especially ironic for someone once so fleet of mouth and foot: nearly immobile and virtually speechless after three decades of Parkinson’s progression. But in his public appearances, and reportedly in private, he neither complained nor felt sorry for himself. He harnessed his ferocious will in the service of making the best of it and for many years traveled the world with a message of peace.

Watch the following clip of Ali in his prime:

Cassius Marcellus Clay, Jr.: Black Supremacist. IQ of 78. Convicted of draft evasion in 1967, and was sentenced to five years in prison, fined $10,000 and banned from boxing for three years. He didn’t serve a day in prison. He converted to Sunni Islam in 1975, and then embraced the teachings of Sufism in 2005.

Great role model for the youth of America.

No doubt you’re fuming at all of the near unanimous praise for him and coverage all throughout the media. Worse, he IS and WILL be a role model for years. Good luck with your anger.

And prez selfie has to post himself into the news.

I remember going down to Sutley’s appliances as a kid with my dad & watching boxing on the display TV’s in the window. Floyd Patterson, Ingimar Johansson & another fading heavyweight I can’t remember in his final years.
By the time Cassius Clay came along in the 1960 Rome Olympics we had a TV. We got it when I was in 8th grade. Cassius was a thunderbolt. He picked apart the reining Russian champion of the day like a surgeon. The man was a typical Russian brute fighter.
Cassius Clay was simply the greatest fighter & entertainer of that era in his early career. When he morphed into Muhammad Ali he didn’t lose a step. You never knew what he would do. He destroyed Sonny Liston before the fight even started. He & Joe Frasier went toe to toe. Then he & George Forman did their thing.
Some of the greatest boxers in boxing history. There’s been nothing like it since.
As for his battle with the government it cost him some of his best years. Given the outcome in Vietnam in which over 50,000 young American lives got pissed away by corrupt politicians who’s to say he was wrong. Not to mention what happened to the the people of the region in the aftermath.
Muhammad Ali aka Cassius Clay was the greatest ever. He revolutionized boxing which had been dying & he stood up to & resisted an increasingly intrusive government.
Very few people ever have an impact like that.

Addendum :
Rocky Marciano & Sugar Ray Robinson.
If Muhammad Ali ever had an IQ of 78 it was after the Parkinson’s set in. It certainly wasn’t in his prime.

If Muhammad Ali ever had an IQ of 78 it was after the Parkinson’s set in.

No, actually he was tested in 1964 and reclassified by the draft board from 1-A to 1-Y (fit for service only in times of national emergency).

Given the extremes to which he went to avoid the draft, I’ve always wondered if maybe he “threw the fight” that was his draft board IQ test.

I, like most people, have heard Ali speak for many decades.

If has an IQ of 78 then IQ doesn’t mean anything.

He was a clever boxer, but he never showed any particular brainpower any other way, not even with his “poetry”.

Ali and I are the same age. The first and only time I ever met him was on a National Airlines flight out of Philadelphia to NYC. I was the copilot and it was my turn to welcome the passengers as they boarded the plane. Ali, Cassius at the time, came through the cabin door at the last minute. I said hello to him and he gave me a big smile. I asked if he needed any help finding his seat in first class and he said that he didn’t. I asked him if he wanted something to read and he said he had his own. He held up a roll of Superman and Batman comics that was 5 inches thick! I think we were about 27 years old at the time. He was a child not only in his actions but his demeanor. I said goodbye to him in NYC and then enjoyed his magnificent career. RIP Mr. Clay.

Inspectorudy :
Yours is the comment of this thread.
I’ll only add if selective service reclassified Ali as 1-Y in 1964 his being drafted would not have become an issue. In 1964 Lyndon Johnson was running for president as the peace candidate against Barry Goldwater as a hawk. Though we were in Vietnam it was still a limited engagement. It was after his reelection Johnson escalated our involvement to over 500,000.
In 1964 Walter Cronkite still supported the war.

My grandfather had Parkinson’s disease. It does not take the mind, but it takes the body. It’s a long, slow, inexorable slide toward immobility and helplessness. I would not wish it on anybody.

Every one of those kids featured in the Shriners’ Hospital for Children commercial is more of a hero and inspiration than Muhammad Ali. Ali was just better at beating people up for fortune and fame.