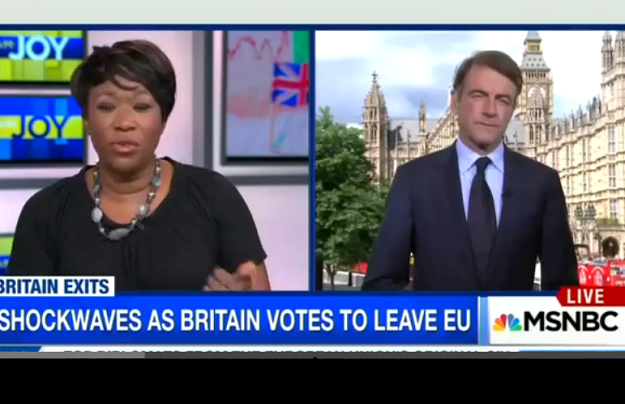 Could there have been bona fide reasons for Brexit? Not if you believe Joy Reid. On her MSNBC show today, Reid suggested that old and rural voters, who tended to vote Leave, had “hijacked the future of the young.”

She also blamed voter discontent on Prime Minister David Cameron’s “austerity” program. Guess Reid reckons that people would have been happier with a UK that looked like Greece. Ron Insana chimed in to suggest that older voters were “re-romanticizing” their past, leading Reid to see a symmetry with Trump campaign, which she claims is being driven by the “nostalgia voter.”

Apparently it hasn’t occurred to Reid that far from “hijacking” the future of the young, older and perhaps wiser voters are trying to save the young from an impoverished future of increasingly burdensome and distant regulation and a country overrun by low-skill, unassimilated immigrants.

JOY REID: Bill, we also know there was a youth versus older people split. There was a sort of rural versus urban split. And now we find out that there is a referendum petition that’s going around by people who regret their vote to leave. 1.5 million people and counting. Is there now a generational sort of fight going on between Britons as to whether or not older voters and rural voters have in a sense hijacked the future of the young?

BILL NEELY: Very much so. I’ll give a personal example. My daughter is 18, she voted to Remain, like most of her friends. And she says on social media, on the kinds of social media they use, it is full of people saying that the old, their parents’ generation, grandparents’ generation, has robbed them of their future. They feel very, very resentful.

RON INSANA: There is also, when you look at the demographics, older folks, and I’m paraphrasing a quote I saw on one of the social media sites this morning, are re-romanticizing their past, they’re trying to recreate something that is now gone to the detriment of the youth of their country.

REID: That’s amazing, because the nostalgia voter is what’s driving the Donald Trump campaign here. So interesting, the symmetry. Kim Ghattas, to what extent is what’s happening in England right now a result of the austerity that was, let’s be honest, put in place by the Cameron administration which was voted back into power even after he had done it after the great recession.

KIM GHATTAS: That’s what’s so amazing when we look at the results of this referendum. The indictment that it is of David Cameron himself who has had to resign and is now being pushed out even faster by the EU who are saying you have got to leave even more quickly than you said you would.

We’re going to hear all kinds of whining from the Collective about this vote, just we’re ALSO going to get all kinds of agenda-supporting BS from some on the right about what it all means.

Until we have some solid polling data (and we don’t), this seems to work the best…

The Brits like the idea of self-determination. No more complex than that, until someone has good data to show otherwise.

Just doing what sore losers do. Whine, whine and whine some more. The msm just loves to hear their whining.

Just get rid of the old and rural populations and everything would be better.

“We need a new electorate”, has been a refrain of the Collective for decades. And they’ve done their very best to provide it, by hook or by crook.

And now we find out that there is a referendum petition that’s going around by people who regret their vote to leave.

From what I’ve seen, it’s mostly people upset they lost, and want a do over; not people changing their minds. Big difference.

Now the EU can put off their computer upgrade.
The suddenly found the have 1 GB of Free Space.

On, come ON, Rags. Admit it! It was clever. A groaner, but clever!

But it’s wrong he thought of it first…

Wisdom, experience and common sense before youthful indiscretion and indulgence are what I see in the #Brexit vote.

And isn’t much “riskier” for the older generation to make enormous changes?

And isn’t it much “riskier”…

If you think this is crazy wait until Trump wins in November. The left is gonna have the world’s biggest hissy fit.

Why? Der Donald IS the “left”…the Collective. Oh, he may not be the flavor of the month for a lot of them, but he IS a Collectivist, command economy, BIG GOVERNMENT loving Mr. Establishment.

They can work with him, and they know it. He proved that in Iowa.

Ted Cruz won Iowa. He proposed NO subsidies and the voters approved.

Fantasizing about a Trump “win” is delusional.

A Trump supporter’s “hissy fit” will happen later and it will happen.

Not a Trump supporter, but I am anti-establishment like the Brexiter’s. Trump is likely to be an ineffective President since he does not have Congress support. Unlike Hilary who almost has majority support in Congress and with the RINOs, will likely get what she wants, Trump seems to be the best choice for breaking the Dem and Rep strangle hold. That does not sound like a “hissy fit”. Fake conservative George Will’s sounds like a “hissy fit” just like the anti-Trump posters here.

Anti-Trump supporters are blinded by their ideal that things will get better after Hilary. Today we are still being attacked by a thousand paper cuts of the LBJ Great Society programs which directly related to the high crime rates of inner cities. Abuses with Social Security are linked backed to Roosevelt. I blame Reagan for the corporate welfare programs of government contractors. I am not a Trump supporter, I am an anti-establishment supporter. I don’t buy globalization and the Thomas Friedman “The World is Flat”. Based on what I have seen and read here, Cruz supports the “Flat World”. Many of the arguments against Trump here are actually magnified 10x against Clinton. Your worst fear is allowing Clinton to get in because us conservatives will revolt against you for supporting the special interest that actually run the Republican Party.

When I see strong Republican supporters say “Cruz scares them”, no matter how I feel that his conservative positions are in line with mine, he has not won the people he needs to win.

If we want to break free of the special interest we need to see the big picture. Trump will buy you time for your cause, Hilary will ruin it. I guess we will find out in Nov, but if I have a fight chance to recover from the Bush/Obama policies, Trump is my best shot before the “establishment” total destroys me. I am guessing the ” old Brexiters” felt the same way.

Too late, it has already happened thanks to Bush and Obama.

The only fantasy is the #neverTrump group.
You know they are the nostalgia voters, re-romanticizing” their past. They are trying to hijack the future of the young? 🙂

Spot on.
Trump 2016
Addendum :
Cruz voted for T.P.A. & increased Muslim immigration & forced resettlement. Some constitutionalist.
And oh yeah, he voted for McConnell as majority leader. To my knowledge he’s never voted for Jeff Sessions for anything.

You’re a lying little crap-weasel. Not that Cruz really has anything to do with this thread.

When has Sessions “run” for anything during Cruz’s time in office, lying POS?

But we DO know that Sessions and Cruz team up for stuff all the time, and that CRUZ killed TPP. Cruz and Sessions actually DO stuff, instead just promising BULLSHIT like Der Donald.

You lie constantly. It’s just who you are, along with insane.

Addendum :
The senate passed T.P.P. Cruz killed nothing re T.P.P. in the Senate.
All Cruz did was lie when he blamed McConnell for his yes enablement vote on T.P.A.

Anyone can look it up, liar.

You’re a lying little crap-weasel. Not that Cruz really has anything to do with this thread.

When has Sessions “run” for anything during Cruz’s time in office, lying POS?

But we DO know that Sessions and Cruz team up for stuff all the time, and that CRUZ killed TPP. Cruz and Sessions actually DO stuff, instead of just promising BULLSHIT like Der Donald.

Technically you are right, but……

“The United States is making headway on two historic trade agreements, one with 11 countries on the Pacific Rim and another with America’s friends in Europe,” Cruz and Ryan wrote. “These two agreements alone would mean greater access to a billion customers for American manufacturers, farmers and ranchers.”

Oh well, splitting hairs doesn’t really matter. I guess I am a troll too because I see the sunlight on Cruz.

Cruz supported TPP, writing an op-ed in the WSJ.

He found a way to untie himself from that in order to fool the voters.

Of course, Rags and his cadre fully support any free contrived trade agreement, so they don’t mind Cruz’s lies.

Cruz killed TPP. You can lie all you want, but anyone can look up how it was stopped.

A lot of people are basing their “old and rural” rhetoric on the NYT heat map, which I am reluctantly linking here.

If you look at this map more closely, it’s a bit disingenuous. The vote was not winner take all like the electoral college in the US, so a good bit of the heavily populated areas voted to leave as well (no data on age from the map)

For example, the map tells us that the color of Cardiff is 60% stay. Manchester and Liverpool and over half of the greater London area is lighter than Cardiff (or red). That means the “stay” vote in those areas was somwehere in the 50’s. That’s a very split vote even in the populated areas.

Sure, the rural areas overwhelmingly voted leave but their votes don’t swing the decision to brexit without a very close vote in the metro areas.

Of course, the media has their narrative and all were predicting stay, so they won’t point this out. Scotland and Northern Ireland are also not as overwhelmingly stay in many parts of their own countries, yet the media are acting as if they are one voice of “stay”. I understand that doing so simplifies the conversation, but it’s not as though everyone from those locales is unified in favor of staying.

To all of the leftists take a long hard look at the turmoil in Argentina. Is that prosperity? Not from my angle of view. Looks like rampant poverty to me. Then there is the mistaken belief that you all will benefit from the turmoil, let me be the first one to tell you that your death will come at the hand of the despot that you put into power.

I just took a look at the Petition webpage. If you are willing to claim UK citizenship or residency and know a British postal code, it looks like you too can sign the petition for a revote.

Noticed that opponents are passing British Postal codes around on Twitter…

Idiots. They don’t deserve the rescue the older, and wiser generation just gave them.

Are these the same older people who stood firm through years of bombing raids and then regrouped and fought to help librate Europe?