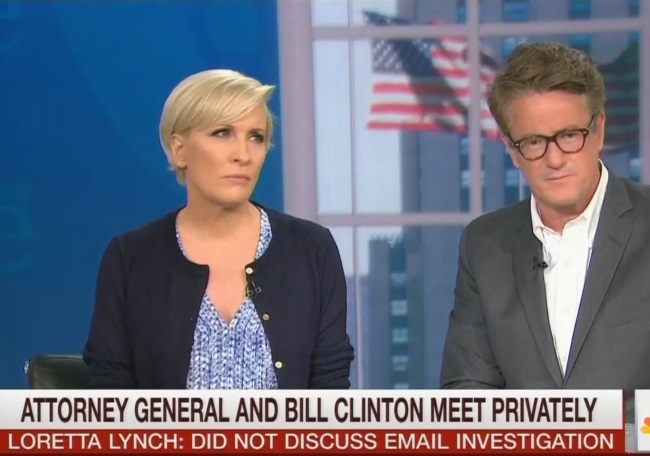 Wow! Mika Brzezinski absolutely ripped into Bill Clinton and Loretta Lynch today for holding a private meeting earlier this week. More importantly, the Morning Joe host clearly seemed to swipe at the rest of the media and punditry class for refusing to focus on the outrage.

When Mark Halperin said “I bet you they didn’t talk about” the FBI investigation of Hillary, Brzezinski literally laughed in his face. “Come on, stop! Everybody stop! Okay, well this is why this is never going to be a problem for Hillary Clinton. People are too afraid to talk about the truth.” In a parting shot, Mika said “we’ll just move on, just like everyone else does. Even though it’s a complete sham.”

Readers are encouraged to view the video, to get the complete picture of just how sarcastic and skeptical Mika was in discussing the meeting and the claim that Clinton and Lynch didn’t discuss the FBI investigation, and how critical she was of unnamed others who are refusing to focus on the outrage.

MIKA BRZEZINSKI: So this morning there are questions about what could have been discussed during a private meeting between former President Bill Clinton.

JOE SCARBOROUGH: Mike’s laughing. You can’t make this up.

JOE: You can’t make this up.

MIKA: No. Oh, I’m sorry, it happened on Tuesday. The face-to-face came as the Justice Department investigates Hillary’s use of a private e-mail server as Secretary of State. The attorney general says the meeting with the former president was unplanned! And that she and Bill Clinton never discussed the e-mail investigation. We’re told the two just happened to be at the Phoenix airport at the same time when the former president boarded her plane.

JOE: Boy, this is beyond optics. This is unbelievable.

MARK HALPERIN: The good news is this gives Rush Limbaugh material for three hours today. It gives him a lot to talk about.

MIKA: Why would he get on her plane to specifically sit down and meet with her and talk about?

MIKA: No! There’s nothing else to talk about but the one thing!

BARNICLE: Of course he did.

GEIST: And what’s happening in Phoenix, so he held his plane to got talk to her about that. Now, that shouldn’t have happened on either side. I think Attorney General Lynch has shown herself to be a pretty solid Attorney General at this point, so I’ll give her the benefit of the doubt that she won’t be corrupted by one conversation with Bill Clinton. But it shouldn’t have happened.

MIKA: Do you really think they were talking about community policing?

HALPERIN: It goes back to she wanted to have her private server. I don’t understand how it could possibly be that no one traveling with either the attorney general or the former president wouldn’t have said, this is a bad idea.

MIKA: You can’t do that. It’s not allowed.

JOE: And where was their staff?

BARNICLE: This is on DOJ, though.

JOE: Where was — who was on the plane with Loretta Lynch to say you cannot do this?

MIKA: I don’t think she needs anyone to tell her this is not a good idea. This is so obvious, right? I mean, and they didn’t talk about it?

HALPERIN: I bet you they didn’t talk about it.

MIKA [laughing]: Come on, stop! Everybody stop! Okay, well this is why this is never going to be a problem for Hillary Clinton. People are too afraid to talk about the truth, and the fact that this was wrong from the get-go, and it wasn’t allowed, as she says.

HALPERIN: I agree with that and I agree that shouldn’t have gotten on the plane, but, it doesn’t mean —

MIKA: Coming up, we’ll just move on, just like everyone else does. Even though it’s a complete sham.

CBS has been reporting it heavily. Their Justice reporter calls the meeting “shocking.”

It’s such a blatant ethical violation, it almost makes one wonder if there was some other purpose behind it. Saw someone speculating on another site that Lynch allowed the meeting to become known publicly so that she can then use it as an excuse to recuse herself from making the charging decision for Hillary.

This administration is so completely corrupt, nothing would surprise me.

I can see Lynch and the Clintons wanting to trigger a recusal because that would delay the whole process (it takes a while to set up an independent prosecutor and so on), which would almost certainly push back any indictment until well after the election.

Absent that, Lynch has no good excuse to drag her feet and the revelations/indictment are likely to land right smack in the middle of Hillary’s attempt to win the election.

[…] the inves­ti­ga­tions going on con­cern­ing Mrs. Clin­ton one might think that the cam­paign might be wor­ried about the appear­ance of such a meet­ing to those vot­ers not already con­vi… to the vot­ers. For­tu­nately for the Demo­c­rat can­di­date it is not only highly unlikely […]

I’m SURE he only talked to her about donating to the Clinton Slush-fund Foundation. No sweat.

Lynch was arranging another gun delivery for the Fast and Furious program. Bill was just trying to get laid.

Why do you think Mr. Lynch was at the meeting.

To talk to Bill about the investigation of course. Loretta was just listening and chatting with her husband.

If you are going to promise an Attorney General a big pile of money and a life long position at the Clinton Foundation – you need to do it in person so there is nothing in writing.

I doubt even dirty Bill wanted a piece of THAT.

This meeting was not about Hillary and her use of the Clinton server. The server was never about Hillary it was about Bill. This visit was Bill’s way of trying to ascertain how much evidence was garnered and whether he would be indicted or friends of his would be indicted from what was found on the server. The idea Bill Clinton does not write emails and supposedly only ever wrote one back in the nineties is subterfuge. How did Bill end up on those flights with underage women? How did he carry on all those extramarital affairs? Are we to assume he entrusted all those communications to phone, or staff emailing via a G-mail account or Yahoo account as his representative? Nah, Billy Jeff Bent Pecker is not that stupid. He is doing what all pervs do – trying to ascertain how bad the Justice Department has the goods on him – the difference is – he is connected by being an ex-president.

The old saying that no one should ever watch sausage being made had the clintons in mind. Everything they touch becomes toxic and polluted. After this can anyone reasonably think that lynch will indict her?

“I don’t understand how it could possibly be that no one traveling with either the attorney general or the former president wouldn’t have said, this is a bad idea.”

Let me explain it to you: Because for Clinton, it was something he had to do, to put the screws on before too much info leaks. Bad idea or not, it was necessary. And for Lynch, there was no choice. When you’re a prominent Democrat and Don Clintoni orders you to meet him, you meet him.

Then they went on to bash Trump for 3 more hours!

But Mika will still vote for her.

You’re probably right, but I actually think there’s a chance that if the Republicans had nominated someone like Jeb she might have voted for him. She really doesn’t like Hillary!

Why would the media be “afraid”? I would think their coverup is motivated by partisanship, not fear.

“People are too afraid to talk about the truth.”
This is an interesting choice of words.