Trump Is Hitler, But If You Americans Elect the Guy, I’ll Look Forward to Working With Him! 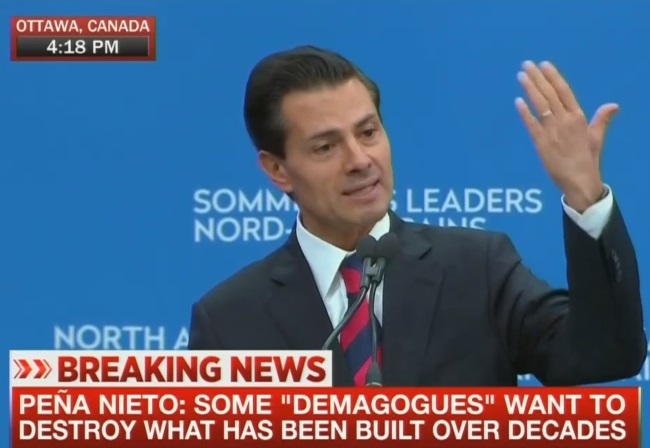 In March of this year, Mexican President Enrique Peña Nieto compared Donald Trump to Hitler and Mussolini. At the time, Peña Nieto said that Trump’s rhetoric was “the way that Mussolini arrived and the way Hitler arrived.”

At a press conference today with President Obama and Canadian Prime Minister Trudeau, Peña Nieto, asked if he stood by those remarks, the Mexican president doubled down. He wordily replied that over decades, the world has made tremendous economic progress, but that “some” want to destroy what has been built. That is what Hitler and Mussolini did, said Peña Nieto. In concluding,  Peña Nieto said “that was my message” in March. Far from repudiating his attack on Trump, Peña Nieto repeated the Hitler/Mussolini comparison. Note also that although it is not in the transcript available to this Legal Insurrectionist, the MSNBC screen graphic has Peña Nieto saying, that some “demagogues” want to destroy what has been built over decades. Sounds like a clear allusion to Trump.

Mexican President Peña Nieto Doubles Down on Analogizing Trump to Hitler and Mussolini from Mark Finkelstein on Vimeo.

Peña Nieto prefaced his comments by claiming “as I’ve said many times and I’ll say again, I look forward to working with whomever the American people choose to elect as their president in November.” Got that? Trump is Hitler. He’d take us on a road to devastation and tragedy. But if you idiot yanquis elect the guy, well then, I’ll be delighted to work with him!

ROBERTA RAMPTON [Reuters]: President Pena Nieto, in March you compared Mr. Trump to Hitler and Mussolini. I’m wondering if you still stand by that?

PENA NIETO: The biggest challenge today is to make sure those benefits [of modern societies and economies] reach out to every single citizen but the solution proposed by some is by destroying what we have built. It is taking a different route to choose the road towards isolationism and destruction. What we need to do is to keep up the pace towards development. And when I said that, I mentioned that most of what some people say it is very similar to that in the past, and President Obama said it even years back, in the past, some leaders address their societies in those terms. Hitler and Mussolini did that. And the outcome, it’s clear to everyone. It resulted in devastation. And it turned out to be a tragedy for mankind. And we saw it last century. That was my message when I made reference to this event.

funny how Mexico gets all irate when outsiders, especially American’s comment on their internal politics, yet this flojo thinks it’s okay for him to inject his idiocy into ours.

“He didn’t say Trump is Hitler or Mussolini.”

I strongly disagree. “Hitler” is such a metaphor for evil that any mention of him in relation to another person can only be an invidious comparison and a grave insult. You say he could have said the same thing about Obama. Surely you agree that in a million years he would never have done so.

It was an invidious comparison and a grave insult. A completely accurate and richly deserved one. But it was not at all like saying that Trump is those people. He is merely like them in some respects.

Whether he would want to insult 0bama by making the same accurate observation about him is irrelevant. It is not required to apply an insult to everyone who deserves it, merely to justify applying it to one person who deserves it. It’s perfectly legitimate to insult only those you don’t like, and not those you do, so long as what you’re saying is correct.

Nieto, Trump has been part of the Democrat Party for decades Is also surrounded by them
When Trump gives a scripted speech, it is by Reg. Democrat Obama supporter Jared Kurshner, his son in law.

Trump’s lawyer and longtime associate, Michael Cohen, isn’t voting for him in the N.Y. primary. Because he’s a registered Democrat.

Michael Cohen, executive vice president of the Trump Organization and special counsel to the billionaire, on Thursday railed against the Republican National Committee during an interview on CNN, accusing party leaders of rigging the system instead of unifying behind Trump.

But it turns out that Cohen, by his own admission, is in fact a registered Democrat and won’t be voting for Trump in Tuesday’s New York primary
————————
Trump’s own lawyer in Trump U case is a Clinton donor
Democrat Daniel Petrocelli backing of Clinton dates back more than 16 years.
————————
Donald Trump: “I Identify More as a Democrat”. Emphatically Praises Hillary…

A new video has been uncovered. One where Chris Moody of CNN did some digging. ”.

This shows a consistent and enthusiastic support for Democrats, the Clintons and a long-running disdain for Republicans and Conservatives.

“In many cases, I probably identify more as a Democrat,” Donald Trump told CNN in 2004.

In the same interview, he said: “It just seems that the economy does better under the Democrats than the Republicans.”

Then in 2007 Donald Trump said, “Hillary’s always surrounded herself with very good people. I think Hillary would do a good job,” as he praised her ability to negotiate and ultimately handle a deal with Iran. It’s also important to note that he praised Hillary

Why would he possibly suspect a person who called for a march on national capital to stop results of a valid election of having fascist tendencies?

Don’t come sneaking across our border when the cartel dumps you.

Look at him. He is a white guy. What does he know about the struggle? You can ignore him until a real Mexican comes along.

He is a native born (i.e. Mexican) of the legal jurisdiction of Mexico. The former inhabitants are Mexican through naturalization. Did Mexico offer native-born citizenship to others in the geographical space?

Mass emigration. Mexico has a problem.

No one wants to destroy America’s relationship with our neighbors. In fact, they want to establish a relationship which is mutually beneficial and considerate of people in each jurisdiction. Furthermore, they want to address the causes of mass emigration. Also, the causes and advocates of anti-native/pro-immigrant (e.g. [class] diversity), pro-choice/abortion policies (e.g. abortion industry, Planned Parenthood corporation).

A baby aborted and cannibalized anywhere is a human life debased everywhere. Rights and responsibilities have become an anathema in liberal/libertine societies. Anti-native/pro-immigrant factions should not be permitted to sweep their religious/moral depravations under the rug, into the hazardous waste bin, inside another human life.

“Peña Nieto prefaced his comments by claiming “as I’ve said many times and I’ll say again, I look forward to working with whomever the American people choose to elect as their president in November.” Got that? Trump is Hitler.”

Bullshit, Mark!!! Can’t you read? Or are you just twisting things a la Leslie?

Most of us are smarter than that.

How deluded is this putz Nieto that he thinks Trump is Hitler?

You put anyone’s name within a mile of “Hitler” and you have gravely insulted them.

But YOU told us he put T-rump in unity with Hitler, which is simply a lie.

Deranged. You can not listen, read, or reason apparently.

And I care about what this guy thinks…why?

The weirdest cognitive disconnect is when you ask a Mexican immigrant why they left Mexico, and they answer, “To have a better life” – and then you follow it up with, “Then why are voting to bring your old life back?” – Watch the blank look on their faces. But it is an opportunity to change some minds.

Didn’t one of the NJ union leaders compare Chris Christie to Hitler a few years ago? I know Margaret Thatcher’s been compared to Hitler. It’s pretty much at the point where if you’re conservative and not getting compared to Hitler every month by some brain dead liberal then you really need to get out more.

Of course, I do own a few history books so I know something about Hitler. Hitler was in power by 1933 but the US wasn’t fighting him until 1941. In other words, it took eight years for the real Hitler to be recognized as being evil enough for us to fight. As late as the end of 1940, well after Hitler had invaded Poland and taken over France, you’ll still find many speeches and op-eds saying that we should stay out of the war. Harvard actually was one of the leading proponents of non-intervention.

Agreed. Perhaps Internet comments and TV sound bites aren’t the best avenues for historical comparisons? And yet here we are…

And other demagogues want to destroy what was built over centuries. Hillary and Obama shredding American exceptionalism comes to mind.

But Donald Ducks has also said he hates the term.

He said we can’t be “exceptional” when we’re poor and in debt, among other bullshit.

Did you ever know an exceptional person? Did their wealth or lack of it make them “exceptional”, or was it other traits.

“Exceptional” being a collective term in this case, applied to the country.

I know of no country that is “poor and in debt” that would be considered exceptional.

If you do, name them.

The U.S. and England, probably Canada, at points in history.

The U.S. is, like an exceptional person, exceptional for reasons totally unrelated to its state of wealth at any moment in time.

T-rump is an idiot WRT American history, as well as a stinking, lying, pathological Collectivist fraud.