Member of the Greatest Generation receives recognition he deserves. 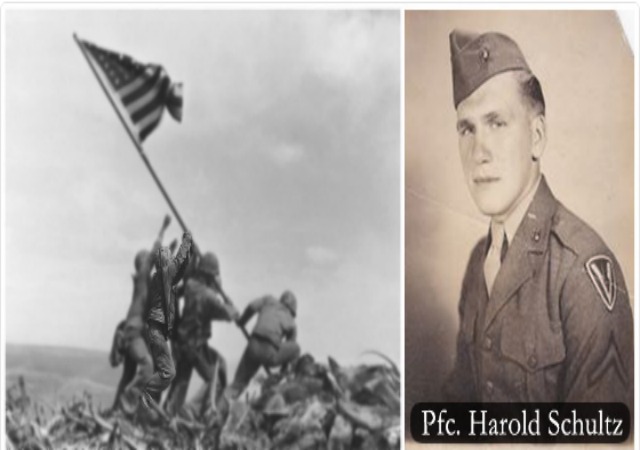 The investigation also found that John Bradley, a Navy hospital corpsman, did not raise the flag. Bradley’s son “wrote a best-selling book about his father’s role in the flag-raising that was made into a movie directed by Clint Eastwood.”

Schultz always knew he was in the picture, but never spoke about in public.

Our history matters & "we have a responsibility to ensure it's right" —Gen Neller pic.twitter.com/8EM5Gm6YsG

Schultz spoke about it once at a family dinner in the 1990s:

“My mom was distracted and not listening and Harold said, ‘I was one of the flag raisers,’ ” his stepdaughter, Dezreen MacDowell, said in a telephone interview on Wednesday.

“After he said that, it was clear he didn’t want to talk about it,” she said. “He was a very self-effacing Midwestern person. He was already sick, and died two or three years later.”

Schultz passed away in 1995 after working as a mail sorter.

The Marine Corps opened the investigation after producers of the documentary “The Unknown Flag Raiser of Iwo Jima” asked questions. Retired Marine Matthew Morgan, one of the producers, told the Marines about evidence that the men in the photograph were misidentified.

The producers saw that Bradley wore different clothes from those in the photo. Charles Neimeyetr, chief historian of the Marines, has heard people say they are in the photo, but with no proof. Neimeyer decided to take the producers seriously after they showed him the pictures.

“Our history is important to us, and we have a responsibility to ensure it’s right,” Neller said in a statement from the Marine Corps.

“Although the Rosenthal image is iconic and significant, to Marines it’s not about the individuals and never has been,” Neller said in a statement. “Simply stated, our fighting spirit is captured in that frame, and it remains a symbol of the tremendous accomplishments of our Corps — what they did together and what they represent remains most important. That doesn’t change.”

Associated Press photographer Joseph Rosenthal captured the image on February 23, 1945. 6,800 Americans died in the battle, but they took the “strategically important island in the Pacific.” Newspapers across the country published the picture on the front page, “quickly becoming a symbol of the sacrifices American service members at war were willing to make.”

And Schultz’s humble nature reminds us once again why the world considers them the Greatest Generation.

The same photographer took two shots of a flag raising on Iwo Jima. The first was the official raising on Mt. Suribachi but one of the senior commanders wanted a larger flag so everyone could see it.

The second was the iconic photo but also the staged one. Not all the original participants were able to be in the second shoot. I believe that the corpsman was in number one and his replacement was in two.

The second photo was not “staged.” “Staged” suggests that the tableaux was enacted for the camera. It was not. As you mentioned, the first flag was small and difficult to see from the beach. An officer ordered a larger flag taken up the mountain and put in the smaller flag’s place. Rosenthal’s famous photograph was taken as the Marines were following an officer’s order to put up a larger flag, they were not posing for a photograph. In fact, Rosenthal said that he nearly missed the shot. Only because his attention was directed to the second raising as it was happening did he manage to get photos of it. (Neither was it staged for the film photographer – he merely captured the same event, as ordered by a Marine officer who had no idea there were photographers present on Suribachi.)

1. The record now shows, apparently,that Bradley was on the first flag raising but not on the second, iconic, flag raising. So, Bradley was an Iwo Flag raiser just not of that iconic second raising.
2. Joe Rosenthal shot that iconic photo but missed the first flag raising, which was the important one to the troops. Rosenthal and Sgt. Bill Genaust came up that mountain thinking they had missed the important moment, the flag raising. They were standing there as E Platoon was getting ready to replace the first,small, flag with a larger one obtained by another Marine from a Navy ship. The story is that as the two photographers were talking, they relized the new flag was being raised. Sgt. Genaust never saw the developed film yet millions have seen it since and especially saw that that film totally captured the image seen on Rosenthal’s photo. For the record, Sgt. Genaust is buried in a cave on Iwo Jima, location unknown.
3. So no, that Rosenthal photo was not staged and your lack of knowledge about American History, especially WWII History, is almost remarkable and not a credit to your teachers nor your education and lack of knowledge.
4. We lost a member of the first flag raising crew a few years back. Charlie Lindberg died, a resident of Richfield, MN. He was a flamethrower gunner on Iwo Jima and there’s a photo showing him on guard, with his M1 carbine, after that first flag raising. Mr. Lindberg was invited to the Memorial dedication and in essence told to sit in the back of the bus, metaphorically speaking. As a Marine, he always soldiered on.

I think you all are a little too critical of Mike H’s use of the word “staged.” I’ve seen it characterized this way before with no intentionally negative inference. It was just a word to differentiate the first flag waiving from the second with a larger flag.

I read Bradley’s book and was in awe as to the courage of the young Marines, mostly teenagers, who crossed the open fields on Iwo Jima with no protection other than their rifle and helmet, under intense Japanese machine gun fire from fortified positions.

I’ve known many Marines in my life (my father-in-law, my son, his friends) and have often remarked:

“Marines either have something no one else has, or they are missing something that the rest of us have.” Oo-rah, Marines!

The inscription on the memorial:

“Uncommon Valor Was A Common Virtue

There were at least three flag-raisings on Suribachi, all authentic in that they were real American flags raised by real Marines while under real gunfire from real Japanese. The first wasn’t photographed. Rosenthal went up Suribachi with the second, larger flag, and took the photo with his Speed Graphic (Government issue, of course). This photo definitely wan’t posed; Rosenthal later said that if he’d done it his way, he’d have had the Marines all facing the camera, which is good for that Home Town stuff, but it would have ruined the shot. The third was a filmed movie, for the newsreels. I think that last one was in color, but memory fades and I’m too old to waste time looking it up for you whippersnappers.

See my comment aboue, especially regarding Sgt. Genaust. He shot his movie film at the same time that Rosenthal took his now iconic photo. As a Marine combat photographer, he had to turn in his footage quite often, how often, don’t know for a fact and not relevant, he never knew what his footage looked like. Your reference to a “filmed movie” was wrong in intent, yet correct as to the fact that the second flag raising was caught on a combat Marine photographer’s movie camera; no way in hell was it filmed after the fact. There is so much phony baloney BS going on as to what really happened during that miserable era and given how much our Obamite masters wish to hide our history, it totally frosts me to see such ignorance on display as shown in your comment and in Mike H.’s too. It’s very important to understand that WWII was in fact a war for survival and in many ways, a near run thing, as to whether the USA could end the Pacific war before the sacrifice was deemed too much.

BTW: Sgt. Genaust was killed when he was asked to use his movie camera light to illuminate a cave where some Jap troops were. He was killed in an explosion and that blast sealed him in that cave; I do recall reading that the cave has been lost to living memory.

The contrasts in character are huge:

A Marine humbly remaining silent about a truth that would make him publicly important.

A BLM/SJW/etc. liberal violently causing damage about a lie only to make himself self-important.

I think it’s important to point out that the first flag was carried ashore by then 1ST LT George Greeley Wells, adjutant for the 2nd Battalion, 28th Marine Regiment, 5th Marine Division. The reason he was the adjutant is because he checked into his command a day late, as he had to drive across country when he received orders to his battalion. This, naturally, made his new CO very upset with him. So his CO made LT Wells his adjutant as a form of punishment.

Since Wells didn’t know what an adjutant was, and I suppose he didn’t want to make his new CO any angrier than he already was, he went through Marine Corps staff manual. One of the duties of the adjutant was to maintain a flag for every operation. On the morning of 23 Feb 1945 They sent a 40 man platoon to patrol to the top of Mt. Suribachi. And the battalion commander, a LT COL Johnson, asked Wells for the flag. Johnson knew Wells had liberated it from the USS Missoula. Then Johnson handed it to the 1ST LT leading the patrol.

This is their flag raising.

When the marines decided to replace it with a larger flag they got one from a beached LST. Commissioned USN ships always carrying an assortment of flags.

I think it was unusual for an adjutant to know his job in such detail to know it was his job to carry the flag. But it was not unusual to raise the flag to stake your claim to territory after fighting hard to win it. I know there were other instances when marines and soldiers carried the flag with them when the made an amphibious assault, often liberated from whatever ship (not that the crew would have minded in the least) brought them to the island.

Raising the flag and keeping it flying means you will not give up. Conversely striking or lowering the colors also has powerful meaning. But it means you’ve surrendered.

I don’t believe anyone, including Joe Rosenthal, thought that picture of the second flag raising was going to become “iconic,” or that anyone thought it was more important than the first.