“Oh honey, it’s all about the money.” 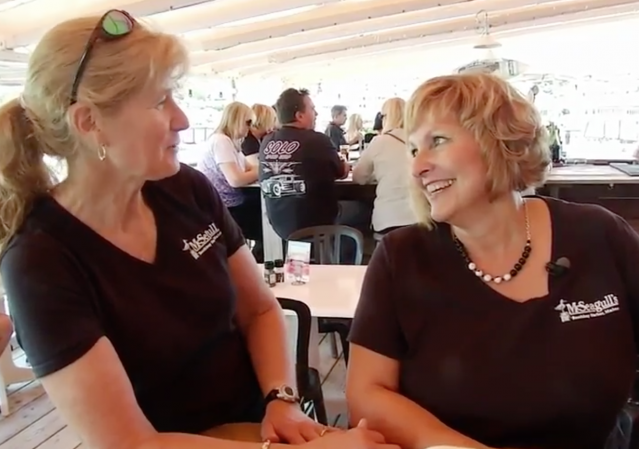 Maine’s First Lady has joined the working class ranks. Recently, she picked up a summer job waiting tables to supplement the household income.

“People expect something different of you because of who I’m married to,” Maine’s First Lady Ann LePage told local news.

Governor LePage makes $70,000 per year in exchange for his stewardship of Maine, making it the lowest paid governorship in the country. The average two-person family income in Maine is about $17,000 more annually than the governor’s salary.

First Lady LePage is saving her summer earnings to buy a car.

“I had no idea it was Ann LePage. I didn’t recognize her,” said one of LePage’s customers, Clayton Eames.

Perhaps customers are more used to seeing Mrs. LePage with her husband on election night, the inauguration stage — or maybe reading to kids and raising money for veterans

“They said you look so familiar,” LePage said.

That familiar face is sporting a new summer look, t-shirt and apron, and is now taking orders on the midcoast.

“It’s something I always, always wanted to do,” LePage said.

Like many Mainers, Mrs. LePage says she got a seasonal job to make a little extra money.

According to the Maine Department of Labor, more than 10,000 seasonal employees are hired in Maine every year to work at restaurants and bars.

“It’s a big business in Maine in the summer — particularly on the coast,” said Governor LePage during a recent town hall.

“My daughter last year, she’s in law school, she made $28 an hour working in Boothbay as a waitress, server. She did so well, my wife, the first lady, to supplement the governor’s salary is waitressing this summer. I’m kidding — not kidding really,” Governor LePage said.

There’s something admirable about politicians (and by extension, their families) who haven’t gone full elitist, but choose to be part of their constituency — as it should be.

I think this is great! Politicians should be of the people not above the people.

“The average two-family income…”? So, the governor’s wife works so they can earn almost twice the average family?

She works because if you want something more than what you have..that’s what you do. WORK And apparently she wants a new car!

rokiloki – something’s odd with that “The average two-family income in Maine is about $17,000 more annually than the governor’s salary.” i took that two mean to person family income. so she is working to put them on par….

I have trouble believing the average two-person family income in Maine is $87,000. From what I can determine, the average household income there is about $50,000, and the per capita income about $28,000.

I’ll have to confess to not understanding your logic. As I understand it, household income is not calculated on the basis of one income-earning adult per household, so I don’t see where the multiplication comes in. If I am wrong, I’m willing to be enlightened. I certainly could be wrong, but $80,000 for Maine sounds high to me.

Okay, now I’m pretty sure you’re wrong. The way I would interpret it is that if the average income per household is $50k, that tells us nothing about an average two-earner household income. You’re basing your figure on the idea that the average household has only one income earner; that’s not how it works.

Unbelievable comments, she working making a little extra money and people want to bitch about it?

My apology – I think I down voted your comment when trying to hit the reply button.

Apparently they’d rather she sat at home and performed duties for the governor.

Maybe Mooch will go to work.