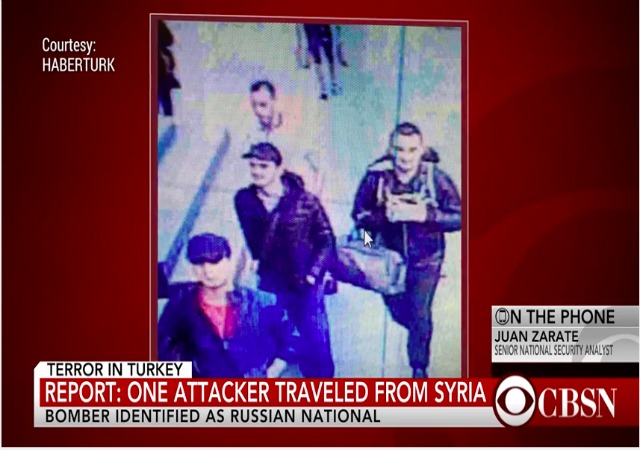 Turkish officials have said the three Islamic State (ISIS/ISIL) terrorists who attacked Atatürk Airport came from Russia, Uzbekistan, and Kyrgyzstan. They also identified the mastermind as Akhmed Chatayev from Chechnya.

Akhmed Chatayev was identified by the pro-government Yeni Safak newspaper as the organizer of the coordinated assault, which killed 44 and wounded more than 200 others at Turkey’s Ataturk Airport. Turkish officials did not immediately confirm he was involved in the attack, and it was unclear if Chatayev was one of the airport bombers, in custody or on the run.

The Istanbul suicide bombers were all smiles before the deadly attack https://t.co/AgMG2Nr26k pic.twitter.com/aXS7DpLsxj

The Turkish official, who remained anonymous, did not provide more details. Interior Minister Efkan Ala claims “that evidence continued to point to Islamic State responsibility.”

ISIS has not yet claimed responsibility for the attack, but Fox News said if Chatayev did plan the attack it shows ISIS’s involvement:

Chatayev had been designated in October as a terrorist by both the U.S. Treasury Department and UN Security Council for supporting ISIS. The Treasury report identified Chatayev as a member of “a group of militants that was planning attacks against U.S. and Turkish facilities” and the UN report said Chatayev “directly commands 130 militants” and was the “organizer and mastermind of planned” terror acts against Russian interests abroad.

He’s described as appearing in numerous videos in 2014 and 2015 in which he associated with other members of ISIS and greeted extremists in Dagestan.

Russian authorities have wanted Chatayev since 2008.

The government has “detained at least 13 suspects in Istanbul.”

Officials found the Russian attacker’s passport “in a cell house in Istanbul’s Fatih district, police said he was of Dagestani origin and entered Turkey with a false passport around one month ago.” The article does not state if the passport belonged to Chatayev. The police explained how the terrorists pulled off the attack:

According to the reports, the attackers initially took a taxi from a street close to Vatan Street in the Fatih district with three backpacks and luggage and told the driver to take them to the Atatürk Airport.

Arriving at the airport, without being stopped for a police check, the attackers got out of the taxi in front of the international arrivals terminal. The attackers, who later wore their suicide belts and took up their Kalashnikovs hidden in their luggage, left the gate with each of them heading their planned spots to carry out the attacks.

The terrorists who attacked Atatürk Airport came from Russia, Uzbekistan, and Kyrgyzstan.

That’s not the lesson to be taken from all of this.

This is the lesson.

They were all MUSLIMS doing these murders for their Allah god.

So was this an attack by Russia on NATO?

One problem here is the amazing rate at which Islamic terrorists make escapes from Muslim prisons. They’re so good at it one might think they had inside help from admirers, but that would be Islamophobic. Another is the amazing rate of pardons and early releases from Muslim prisons, almost like their initial jail sentences were solely for consumption by Western media, to be cast aside once they are forgotten.