“My message today is love your brother, love your neighbor. Don’t judge ‘em.” 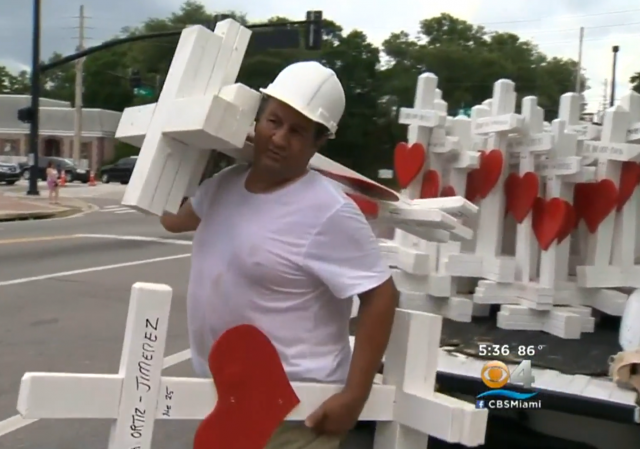 Despite of the evil that overrides the headlines, there is still good in this world.

Meet Greg Zanis, a man from Illinois who built and delivered 49 white, wooden crosses for the victims of the Orlando terrorist attack.

Greg Zanis built 49 wooden crosses then drove 1,200 miles from Illinois to Florida to place them outside the Orlando Health Medical Center. “My message today is love your brother, love your neighbor. Don’t judge ‘em.”

Zanis says he plans to pass along the messages people write on the crosses to the victims’ families.

But this is not the first time Zanis has trekked across the country to honor victims of mass shootings. He visited Colorado to deliver crosses memorializing victims of the Columbine High School shooting as well as the Aurora theatre shooting. He delivered crosses after the Newton school shooting:

When his father-in-law was murdered twenty years ago, Zanis stopped building houses and started building crosses.

“We are all as a nation, suffering over here,” Zanis said in 2012. “I want to let them know that Greg Zanis cares.”

Loretta Lynch will probably charge the man with a hate crime.

Kindness is never wasted. God bless Zanis and those like him.

I’m sure the libs will be upset that crosses are symbols of a repressive religion.

May the good Lord boss him and keep him.

Preview SHOULD be my friend….BLESS him and keep him.

We are the majority.