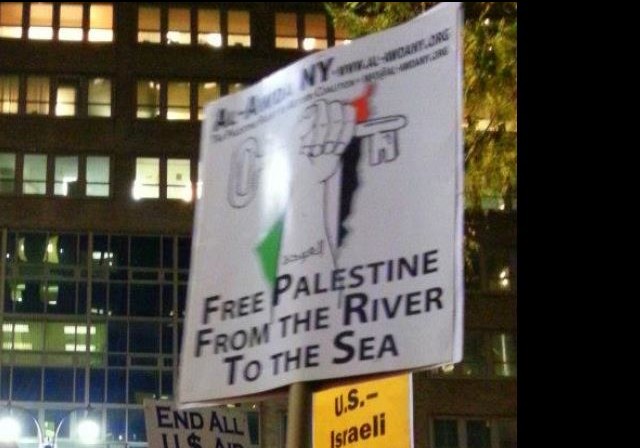 The latest adjustment is moving its focus to graduate student unions, where the student population is a subset of the entire student population. In such unions (similar to some faculty associations), BDS supporters take over governing councils and turn the union into a BDS-controlled anti-Israel propaganda activist organization.

We saw this in the U. Cal. system, and again at NYU. In each of those instances, the grad student union was an affiliate of the United Auto Workers.

In the U. Cal. case, the UAW overruled the BDS resolution as contrary to the UAW’s governing rules.

It just happened again at NYU.

As we reported, after a sleazy campaign of vilification and manipulation, with questionable tactics, BDS supporters at the NYU grad student union passed a BDS Resolution. (Anti-Israel groups at NYU have a long history of smear tactics and intimidation.)

A group of grad students opposed to BDS filed an appeal to the UAW, which stated in part:

Our unit’s endorsement of BDS (“the Resolution”) violates the International UAW’s Constitution and Ethical Practice Codes (EPC) in the following ways:

The appeal was successful.

Two months after the Graduate Student Union at New York University voted to join the Boycott Divest and Sanctions movement against Israel, the decision was repealed by the group’s parent union, the United Auto Workers.

The decision made this week was the result of some members of the NYU student union (GSOC) filing an official appeal against the April decision, claiming it violated the UAW constitution’s own bylaws.

The appeal, signed by Ilana Ben-Ezra, member of GSOC for Open Dialogue on Israel and Palestine, pointed out that the resolution is illicit because it violates the UAW’s pledge “to maintain free relations with other organizations.” Ben-Ezra also noted that the resolution goes NYU’s official position and “vilifies” companies that are members of the parent union.

The effect of this ruling, however, is more sweeping. Here is the ruling: 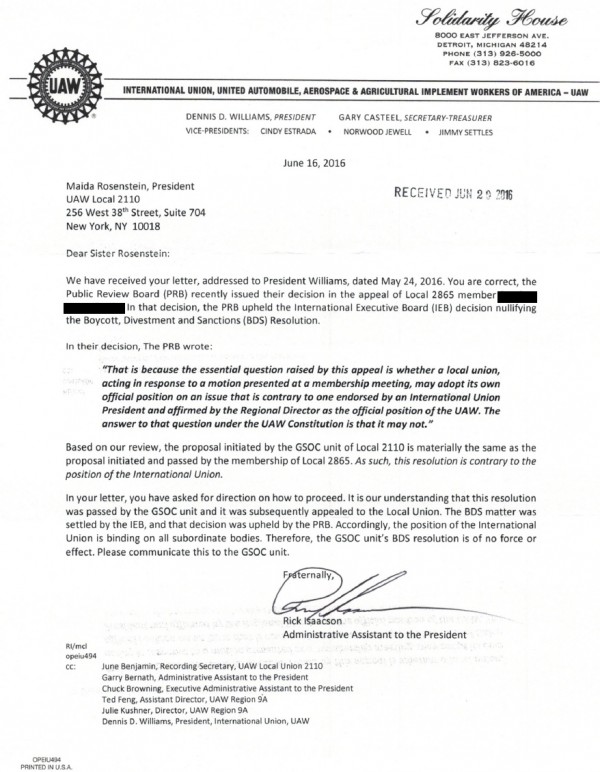 The key language is as follows (emphasis added):

In your letter, you have asked for direction on how to proceed. It is our understanding that this resolution was passed by the GSOC unit and it was subsequently appealed to the Local Union. The BDS matter was settled [in the U. Cal. case] by the IEB, and that decision was upheld by the PRB. Accordingly, the position of the International Union is binding on all subordinate bodies. Therefore, the GSOC unit’s BDS resolution is of no force or effect….”

As the student group noted in its press release, this is a hugely important ruling (emphasis in original):

On June 16, 2016, United Auto Workers (UAW) took an historic moral stance against the movement for Boycott, Divestment, and Sanctions (BDS) of Israel, by ruling that no subordinate body of the International UAW can endorse BDS.  The ruling affects graduate student unions at over 15 universities, including New York University, University of Massachusetts, University of California, and University of Washington, several of which have recently passed BDS resolutions.

I have no doubt that some grad student sub-units of the UAW will continue BDS activism, and maybe adopt more BDS resolutions.

BDS, particularly on campus, is not about outcomes, it’s about process. That process is to demonize and dehumanize Israel and Israelis. So long at the debate is over how bad Israel supposedly is, BDS considers it’s winning.

It’s madness, but there’s a method.

The BDS keeps losing over and over. The haters need to suck it up and move on.

I had no idea the UAW was affiliated with any colleges in any way. What’s up with that?

I think they have a local involved with teaching assistants or some such. Unions can pretty much establish chapters as they can; they are not limited to the profession in their title. The UAW is involved with some aerospace workers as well.

BDS is a shape shifting, opportunistic virus with very little to lose. The skin it puts into the game is paid for EU based NGOs whose only expected return on investments is headlines. Win, lose or draw, as long as BDS remains visibly active, few backers will care to peek behind the fronts of its Potemkin village.

Unlike say, Trump or Hillary, or Brexit or Remain, there’s no large scale demand for what BDS peddles. Thus, the need for headlines–to supply an address for Jew Washers, baiters and SJW dupes.

It’s all BDS has.