At least one gunmen appeared on the Shin Bet suspect list. Both gunmen in Israel without permits. 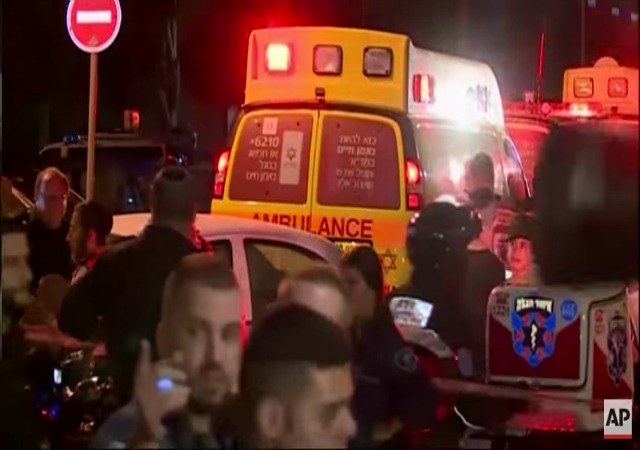 The police managed to shoot and disarm the gunmen.

Three people remain in critical condition while four others have serious injuries.

Police have not confirmed if the gunmen dressed as Orthodox Jews as one eyewitness claimed.

VIDEO: Footage of the moment when shots first rang at a restaurant in #TelAviv #Israel – @IsraelHatzolahhttps://t.co/Vf55kwyqve

From Times of Israel:

Yechiel Miller, a volunteer medic with United Hatzalah, related from the scene of the attack: “When I arrived at the scene I saw a woman who was unconscious and not breathing and in critical condition. We began resuscitation efforts. We also treated numerous other individuals who suffered gun shot wounds and wounds from shrapnel.”

“While we were treating them other volunteers form the ambucycle unit of United Hatzalah reported that they were treating an unconscious woman behind the Sarona center and that she was in critical condition. We are currently searching for and treating other people who are suffering from shock and who have fed to nearby streets due to the incident.”

Chico Edri, head of Israel Police’s Tel Aviv district, said they do not believe suspects remain at large. He confirmed they arrested one gunman and took the other into custody after an officer shot him. They took the weapons used the killing spree.

The gunmen also did not warn of the attack.

An eyewitness told Israel Radio that the gunmen were dressed up as ultra-Orthodox men. Other reports said they were dressed in semi-formal attire: black pants, white shirts and ties. Police wouldn’t address the claims.

A bartender confirmed to The Times of Israel that the two gunmen were sitting at Sarona’s Max Brenner restaurant before beginning their shooting spree. Yousef Jabarin, a resident of Umm al-Fahm, said the pair were dressed as “warriors”– wearing black suits, white shirts, skinny ties. He said he knew they were from the West Bank by the way they were dressed. The terrorists sat down and ordered a dessert, he said, and after 15 minutes, they stood up and started shooting.

The gunfire lasted about a minute, he said. Jabarin said the Max Brenner restaurant does not have its own security guard.

Palestinians handing out sweets after the attack:

Yet, Israeli doctors are working to save the life of one of the gunmen.

Someone needs to remind this journalist of that fact.

There was a shooting in Tel Aviv sadly. Get ready 2 hear media disinformation about evil Palestinians w zero context about Israeli violence

Pictures have emerged from the crime scene:

Live blog: One of the Tel Aviv shooters was on Shin Bet suspect list https://t.co/9cOI0mD6xn

Another victim died. Officials have not released names of any of the victims or injured.

Police confirmed the gunman are 21-year-old Palestinian cousins “from the Hebron area in the West Bank.”

Stay classy, Hamas and Popular Front for the Liberation of Palestine!

Officials have released more CCTV videos of the attack. WARNING. May be disturbed by the images.

Hamas media tweets out picture of one of the shooters.

Hamas is a pack of Jackals.

Many prayers for Israel…when will this ungodly palestinian hatred stop?