Joe Lectures Cole, of OKC Area, About Terrorism and Tells Him to Read Constitution 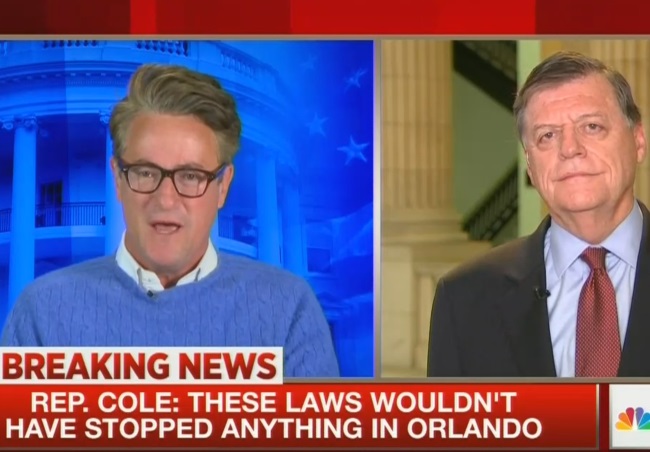 With all the zeal of a Joey-come-lately, gun-control convert Joe Scarborough clashed on today’s Morning Joe with Second Amendment defender Tom Cole, Republican congressman from Oklahoma.

When Scarborough lectured Cole about terrorists “who want to kill people in your district,” Cole shot back “Joe, I know something about terrorism. I lived through an incident in Oklahoma City.” And when Scarborough patronizingly instructed Cole to “read the Constitution,” Cole retorted “I think I’ve read the Constitution as often as you have.” Mike Barnicle waited until after the interview to take a cheap shot at Cole, claiming that he is “handcuffed to the top leadership of the NRA at the expense of ordinary people.”

One question that neither Scarborough nor any of the grandstanders sitting on the floor of the House can answer: which of their bills would have prevented the Orlando massacre? The simple answer is that despite the self-righteous stunts, none of the bills would have made a difference since Mateen had no criminal record, was on no watch list, and had passed a background check.

JOE SCARBOROUGH: If it’s so awful, maybe we should get rid of [the terror list.] It’s not complex. You’re saying this is a terrible list!

TOM COLE: No, I said the number of lists we have are complex.

JOE: Does it make sense, then, if it serves a useful purpose that you do your job as a legislator and senators do their jobs as legislators and make sure it’s an even better list so we make sure that people that are on that terror watch list can’t go in and buy an AR-15 and mow down people in Oklahoma.

COLE: Do you know anybody that did that? The murderer we had wasn’t on the list.

COLE: Joe, I know something about terrorism. I lived through an incident in Oklahoma City, all right?

JOE: I know you lived through terrorism. Yeah, I understand that.

JOE: Why don’t we try to prevent the next Oklahoma City instead of sitting back and acting like —

COLE: I think we are trying to prevent next Oklahoma City.

COLE: Yeah, and we’ll get a lot of cooperation from the administration to achieve that. Hopefully we will.

JOE: Don’t fund them then. You’ve got the power of the purse. Read the Constitution! The constitution gives you the power.

COLE: I think I’ve read the Constitution as often as you have.

JOE: The Constitution gives you the power to —

JOE: I understand that, Congressman. Then don’t act like you’re helpless. You’ve got the power.

JOE: All right, Congressman, we love having you on!

COLE: Always great to be here.

JOE: Always great to have you here.

MIKE BARNICLE: Tom Cole is a very good guy, he’s been on this show numerous times, he’ll be back numerous times. He described what happened in Orlando as part of a deep social, cultural problem. That’s an exact quote. You want to say: congressman, what’s your solution? But they never answer, they never answer. Because it’s so wrapped up in the top tier of the NRA. They are handcuffed to the top leadership of the NRA at the expense of ordinary people.

The video is now “private”.

Yes, we’re appealing to a more selective audience now 😉 But seriously, thanks for bringing to my attention. I keep the videos private until I finish editing them, then make them public, but forgot to do so with this one. It’s public now, thanks to you!

We’ve just got to do something! No matter if it’s Ineffective or if it tramples our God given rights and Liberty, something must be done! To guns of course, not to those generic violent extremists who come out of nowhere with mysterious ideologies.

Clinton and Congressional Democrats want to crack down on terrorism by prohibiting people on the no-fly list from buying guns.

Perhaps therein would be a good start

From what I understand the answers are: You’re not allowed to know; No; Not that I know of (and you have to know you’re on the list first!); apparently administrative only.

If anyone knows better, please correct me!

For a true ‘watch’ list that’s probably OK Constitutionally (like a list of suspects for a crime), but when you start depriving people of rights due to their presence on the list, the due process bar is far higher.

cazinger:
No way of knowing you’re on and no real good way to get off. Money and a good lawyer once you’ve been denied I’d guess is how you find you’re on a list. Probably lots of money.
It’s even snared congress critters. And they’ve had a hard time getting off.

What is so childish about the left’s attack on guns of any kind is that they cannot harm anyone without a person behind the trigger. Just like cars and knives, they are mostly harmless without a human involved. A Molotov cocktail is harmless without a human involved. They don’t seem to understand that when a human has evil or insane intent, there is nothing any law can do to prevent it unless we go to a TSA sort of lifestyle in every venue we attend. Evil is here and always will be. The bad guys will always have guns because they don’t follow any of our laws in the first place. That brings us to defense against these evil people. “A well regulated militia being necessary to the security of a free State, the right of the People to keep and bear arms shall not be infringed.” Folks, this is the answer. It doesn’t matter whether or not the evil is a tyrannical government or islamic terrorists, we, the people have the right and duty to arm ourselves to defeat ANY group that attempts to take away our freedom including Congress!

The way to stop Muslims from slaughtering Americans like sheep is to reestablish the militia so that the vast majority of Americans will be armed and ready to fight back.

This isn’t about gun control, this is an attack on the second amendment.
Rep. Mike Doyle, D-Pa., said the second amendment needs changes, because Americans don’t agree with it and we’ve had enough.
Cause, they won’t watch anymore people get slaughtered and do nothing.
That is what this is about.

Guns are illegal in France and the Muslims are able to get AKs and slaughter hundreds of Frenchmen like sheep.

If people want to change the 2nd amendment there is a procedure to do that. If it is true that the people want to be disarmed then amend the Constitution.

Hey Joe, where you going with that feather in your hand? “Gonna tickle my ol’ lady. She been sleeping round with another man.” Joe, you’re an imbecile. Please don’t come back to the Gulf Coast. You’re not welcome here any more!

If we are at war with the terrorists then why are we letting Muslims into the country? Islam is in every significant respect identical to Islam. When we were at war with Nazism we didn’t let Germans into our country. Why do we let Muslims in?

Tyrant Obama the Liar wants more Americans to be murdered like what happened in Fort Hood, Boston, San Bernadino and Orlando. He wants to use the murders as justification to violate the second amendment. He is so dishonest that he would put his political enemies or all Americans on this list in order to achieve gun control.

According to the gun grabbers, it is not possible to see a right for individual carry outside of some 3rd party instruction, then the same must be true for the gun grabbers. They must be just robotic drones at the beck and call and control of the Brady bunch.

Why aren’t all muslims on a terror list because they probably will kill many Americans. This last one was born here so none of them should get a pass from blowing joe.