But bankruptcy does not necessarily mean the end of Gawker. 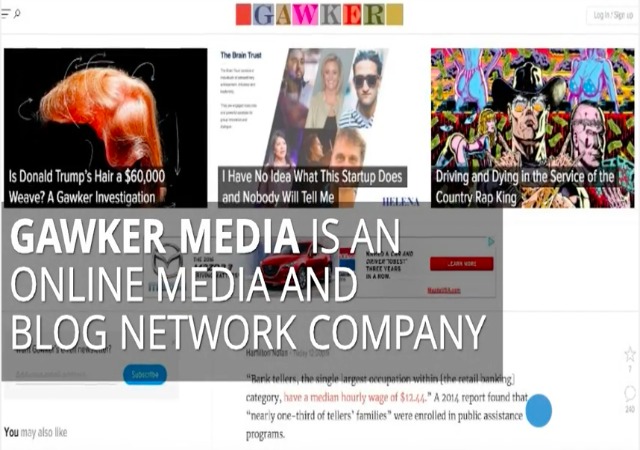 Gawker Media filed for bankruptcy protection due to the $140 million verdict to Hulk Hogan after they published a video of him having sex with his best friend’s wife.

I saw people celebrating the bankruptcy news, but this action allows Gawker to delay any payment to Hogan. The bankruptcy also allows the company “to continue operating and paying its staff” with a $22 million loan.

The Chapter 11 bankruptcy claim actually puts Gawker under federal protection so they can reorganize and pay their debts:

Under Chapter 11, a debtor can restructure its finances through a plan of reorganization approved by the bankruptcy court. By reducing obligations and modifying payment terms, a Chapter 11 plan can help a debtor balance its income and expenses, regain profitability, and continue in operation. Under Chapter 11, a debtor also can sell some or all of its assets so it can downsize its business if necessary or pay down claims that it owes.

At the trial, documents told the jury that Gawker “was valued at $83 million and that Mr. [CEO Nick] Denton was personally worth $121 million.” They also heard the company earned “$48.7 million in revenue” in 2015, but “an earlier financial disclosure, the company turned an operating profit of $6.5 million on revenue of $44.3 million in 2014.”

In fact, the company now faces an auction, which will start at $90 million from Ziff Davis LLC:

In a memo to staff, Ziff Davis chief executive Vivek Shah said the auction will likely take place at the end of July and that he expected the bankruptcy court to set a schedule to take other bids soon.

“There’s a tremendous fit between the two organizations, from brands to audience to monetization. We look forward to the possibility of adding these great brands—and the talented people who support them—to the Ziff Davis family,” he said.

The filing comes only a few weeks after the media reported Silicon Valley billionaire Peter Thiel helped fund Hogan’s lawsuit against Gawker. Denton called it a vendetta since Gawker outed Thiel as gay ten years ago.

The filing comes only a few weeks after the media reported Silicon Valley billionaire Peter Thiel helped fund Hogan’s lawsuit against Gawker. Denton called it a vendetta since Gawker outed Thiel as gay ten years ago.

Piss off the wrong people, and reap the consequences. This recent lawsuit qualifies as a “vendetta” under their definition, since Gawker “outed” Hulk Hogan as a philanderer a while ago.

Pro-tip: Maybe it’s not such a good idea to publicly publish intimate (and embarrassing) details of people’s private lives, hmmm?

The slime at Gawker should consider themselves lucky that somebody taught them a lesson in court. Many people would take their retribution in a physical manner.

I’m always amazed at how many people actually read that garbage. Sad, really.

Denton still hasn’t learned anything. It’s going to get worse, for him.

I think the minute I knew that Gawker was going to lose the case to Hogan was when they played the video of the deposition of the editor, Daulerio, where Hogan’s lawyer asked him whether he would publish a sex tape of somebody underage.

Daulerio said that there was an age limit to what should be published.

The lawyer asked how young was too young.

It is said you should always say something good of the dead. Gawker is dead….GOOD!

Full justice would be Thiel buying Gawker for a bargain price in the bankruptcy sale….

Isn’t there a social law against gawking (i.e. “stare stupidly”)?