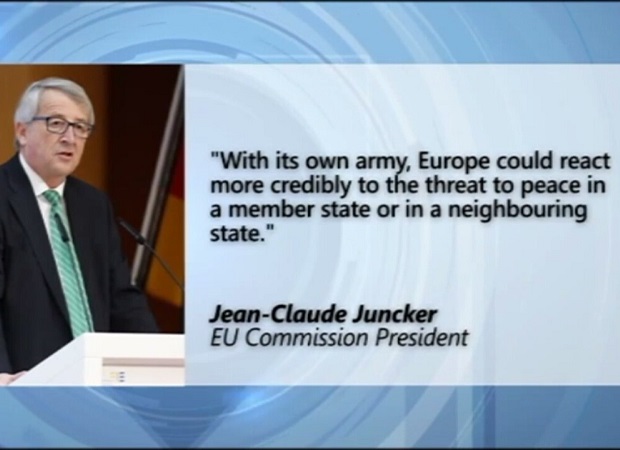 According to UK Armed Forces Minister Penny Mordaunt, Britain must join a European Union Army under Brussels’s direct command if the country stays within the EU. The ominous revelation comes as British voters are heading towards a historic ‘in-out’ referendum on June 23. What could only be described as cynical manoeuvring, EU bosses intends to table the plan a day after the British referendum — concealing the totalitarian nature of the ‘European Project’ from the British voters.

Mordaunt made it clear that if her country were to stay in the EU as a result of a “remain vote”, her government would be “powerless” to stop the formation of an EU Army. Furthermore, UK would be “bound to support” and bankroll such an Army under the provisions of existing Lisbon treaty. “As usual with the EU, the plan for this army would see Britain paying highest price and but getting a raw deal. They’ve done that with our budget, I’m not going to let that happen to our armed forces,” Minister Mordaunt told the UK voters.

The preparations for new pan-European Army outside the framework of NATO are long under way. Germany and The Netherlands have reportedly merged their army and naval assets to form a core fighting force that would serve as the basis for a new EU Army. NATO officials had recently accused France of neglecting its commitment to NATO-alliance by diverting resources to build an EU Army.

According to the reports surfacing in British media, the detailed plans for an EU army under the command of unelected Eurocrats was being prepared by none other than EU foreign policy chief Federica Mogherini. London-based newspaper The Express reports:

The [EU foreign policy chief Federica Mogherini] proposals refer to “permanent structured defence co-operation” powers that allow a group of nine or more EU states to press ahead with plans for a military headquarters.

It follows an agreement by the Germans and Dutch to merge their army and navy to form the nucleus of a single EU military force.

Talks are also ongoing to include the Czechs and under the terms of the Lisbon Treaty, signed in 2007 by Gordon Brown, the Anglo-French defence arrangement means that Britain and France would also be obliged to join the EU army.

What stated in 1950s as common European market, promoted by France and Germany, has today taken all the paraphernalia of a nation state with its own parliament, president, central bank, flag and even anthem. A transnational army could give EU Bureaucrats an instrument to enforce it policy on individual member states and rival foreign powers. The unelected commissars in Brussels have long toyed with the idea of an army to enforce their will. Back in 2014, EU President Jean-Claude Juncker saw the prospect of an EU Army as inevitable.

In the very long run, we will need a European army. Because we have to be credible when it comes to foreign policy #wahlarena #withJuncker

But don’t expect the mighty EU Army to do the obvious; secure the external borders of the Union against the migrant influx.

European naval ships are already serving as shuttle service for people smugglers by picking up migrants off the boats on the high seas — further encouraging the smugglers to ferry more and more people across the ocean in crumbling and cramped up boats.

EU is doubling down on its disastrous open border policy. Despite stiff opposition from East European countries, Brussels is pushing ahead with the plan to force member states to take in migrants on continuous basis.

With unelected and unaccountable EU High-Commissars showing no intentions of listening to the wishes of European electorates, a British rejection of EU membership at the referendum or ‘Brexit’ could encourage other smaller member states to stand up to the bullies in Brussels.

VIDEO: British MEP Daniel Hannan on why Britain should leave the EU

So why us the USA still protecting western Europe? The beer can’t be that good.

It is one thing to cooperate. It is another to submit.

He is correct, as usual, but he is mostly arguing facts, which does not seem to be the path to electoral wins these days. On the other hand, he got his best responses when he made a modest appeal to England’s historical characteristics. Like its offspring, America, England’s historical culture may be so diluted by contrary immigrants that its once-great culture is gone for good.
I hope not.

Or as Chesty Puller famously said at the Chosin Reservoir in 1950, “We’ve been looking for the enemy for some time now. We’ve finally found him. We’re surrounded. That simplifies things.”

Just watched “Brexit-The Movie” on youtube…. total disconnect of Brussels EU overlords and the people. Technocratic society. One shortcoming of the Brexit campaign is how many Britishers want to have pablum everyday from birth to death and not have to work for it?

I hope the Brits see the position they’re in and decide to pull chalks/pop smoke/make like a newborn.

Oh, they might send the Fighting 515th Belgian Heavy Barber Battalion on a UN mission sometime.

But we all know who will feel the full weight of the EU army: the good people of Europe who, in the future, choose to defy the dictates of Brussels.

If you had a country without borders, without it’s own currency, and somebody else was running it…
Just what would you have?

I remember a story.
It was about a collective of individule aligned governments, who banded together for mutual objectives.
Something like that.
At a certain point, their differences were at odds, so half of them decided they wanted to pull out.
So, they did. And they started printing their own money and were trying to put things back into order.
Well, the other half needed their resources and they wanted to remain in power…
So then there was this huge war between them.
It seems a long time since the story was told to me, and the story has changed many times since I first heard it.
The new story doesn’t much resemble the old one.
But, they still tell me the North won.

So, I guess we are looking at a lesson to those who for the benefit of security decide the safest choice comes at the mere expense of their Liberty.

EU army would be used to enforce world court rulings especially any related to supposed war crimes by coalition forces in middle east.

There need not be economic or political union for there to be a military cooperation and coordination and treaties.

Organisations like the European Union and dreaded United Nations is dangerous to all nations who take part. Those organisations threaten national sovereignty, and Liberals hate it when individualism exist from any nation. Just a reason they (the left) want to destroy the United States and any other nation that does not want to take part in their central, global government. So my thoughts, the United Kingdom should fight to stay separate, to remain sovereign in their own right!

And this will be just one division of the mighty UN army!

And Poland wasn’t even invaded.

It’s official, the Brexit vote has now devolved into an IQ test. Those who vote to stay should immediately turn in their brains for they are no longer qualified to think.