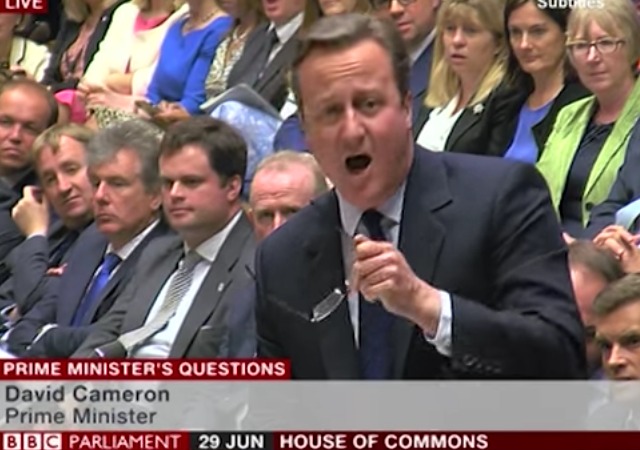 British Prime Minister David Cameron told Labour Party leader Jeremy Corbyn to leave his post, a day after his party passed a no confidence motion against him.

“It might be my party’s interest for him to sit there, it’s not in the national interest and I would say, for heaven’s sake, man, go!” he said at the House of Commons.

(Video after the jump)

Labour’s members of parliaments (MP) passed a no confidence vote against Corbyn yesterday, 172-40. People inside the party felt Corbyn and his office hampered the party’s campaign to keep Britain in the European Union. From The London Times:

The broadside from Mr Johnson came as the Labour leader faced an avalanche of resignations from his shadow cabinet and frontbench team, with some of the most senior shadow ministers calling for him to quit.

Tom Watson, his deputy leader, added to the pressure by telling Mr Corbyn that he had lost the confidence of the parliamentary Labour Party and would face a leadership challenge if he did not step aside.

The Telegraph reported he “lost 20 of his 31 strong shadow cabinet.” Lisa Nandy and Owen Smith said they quit because Corbyn did not show any leadership to the Labour Party. They both want Watson to take Corbyn’s spot. Will Straw, the executive director of the Remain campaign, echoed their concerns:

“Rather than making a clear and passionate Labour case for EU membership, Corbyn took a week’s holiday in the middle of the campaign and removed pro-EU lines from his speeches,” Mr Straw said on Monday afternoon. “Rather than finding imaginative ways for Labour to present a united front and get its message across to wavering supporters, Corbyn vetoed a planned event featuring all Labour’s formers leaders.”

It is with a heavy heart that I have today resigned as Shadow SoS Education. My dream job but the situation is untenable

Cameron should follow his own advice. The UK needs to get moving on the Brexit and if Cameron won’t do anything about it, then waiting until October is tool long.

So Corbyn was right all along and now Labour hates him for it?

Cameron needs to leave now. Last I checked, Cameron is a Tory, and he should let the Labour Party conduct their affairs as they see fit. Cameron is one of the elites clinging to the EU. That he does have in common with Labour Party bosses. For all the graciousness of Cameron’s speech after Brexit, he is going to lose it all delaying the exit.

“Party bosses”?! The parliamentary party is the core of the party, not the bosses. If they have no confidence in him then how can he lead them? I understand that both major parties have now given the choice of parliamentary leader to their general membership rather than just their MPs, but that’s a delicate balancing act that will collapse if the membership imposes a leader on the MPs whom they can’t support. In the end, it’s the MPs, not the members, who are the real party.

I’d disagree to the extent that its the MPs who are the real actors…or electors…not the members or voters. Just as here in many of our primary states. Kind of small-r republican.

A party is, by definition, a group of MPs who act and vote together; the external organisation exists to elect MPs who will join the party, but it’s the MPs who really constitute the party. That’s why until very recently all party leaders were elected by their parliamentary parties, not by the outside support structure. And why that’s still how it works here in the USA; nobody but the party caucus gets a say in party leadership positions, because that’s whom these leaders are supposed to lead.

“A party is, by definition, a group of MPs who act and vote together; the external organisation exists to elect MPs who will join the party, but it’s the MPs who really constitute the party. “

Perhaps this should read:
The Labour Party is, by definition, a group of MPs who act and vote together; the external organisation exists to elect MPs who will join the Labour Party, but it’s the MPs who really constitute the Party.

My use of “party” was with a lower-case “p”, and I was referring to those many reliable Labour voters. Similarly, by “party bosses” I was referring to the mucki-mucks and poohbahs, such as Members of Parliament, members of local councils and such. The Labour Party leaders and the Labour Party voters seem out of step. Corbyn seems more attuned to the voters than the other leaders.

MPs are not “bosses” in any sense of the word. They are preselected by the local party branches, and thus represent them pretty faithfully.

He’s announced he’s resigning, which in GB means he’s effectively resigned when he said he would, but is conducting a rational transition.

The markets see and understand this, as does even the Brexit opposition, who would use any HINT of a chaotic period as an excuse to quash the referendum and try to avoid acting on it.

Leaving the EU will be a process, not an event, and it BETTER be done carefully.

Cameron can’t leave now. The party has to elect a new leader, and then that person needs time to form his or her government and have an orderly transition; if he leaves now then there’d have to be a temporary government for two months, with no real authority to do anything important. Cameron still enjoys the confidence of his party and of Parliament, so he is not a caretaker, and his government has the full authority to make whatever decisions need to be made until his final day. Of course once his successor is chosen that person will effectively be in charge even before his or her formal takeover.

Brexit was the conclusion of Breach that highlighted the humanitarian disaster created by anti-native/pro-immigrant, pro-choice factions.

How can we miss him when he won’t go away? (With apologies to Dan Hicks)