Clinton Donor With No Experience Appointed to Govt. Intelligence Board

Clinton Donor With No Experience Appointed to Govt. Intelligence Board 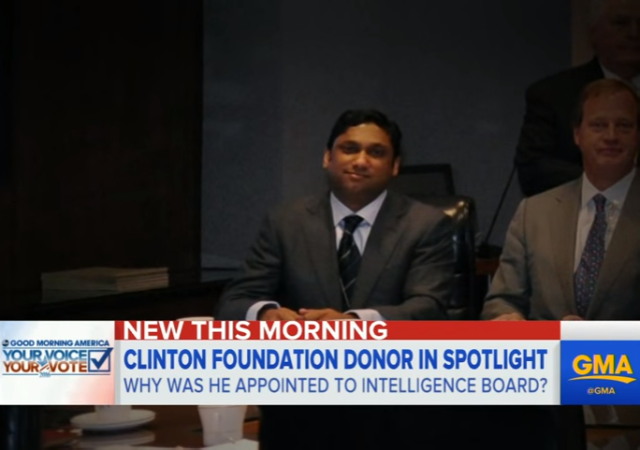 Hillary Clinton has a brand new scandal to deal with. The ongoing investigation into her emails has revealed that a donor to the Clinton Foundation landed a plum appointment with a government intelligence board despite the fact that he had no relevant experience.

How Clinton Donor Got on Sensitive Intelligence Board

Newly released State Department emails help reveal how a major Clinton Foundation donor was placed on a sensitive government intelligence advisory board even though he had no obvious experience in the field, a decision that appeared to baffle the department’s professional staff.

The emails further reveal how, after inquiries from ABC News, the Clinton staff sought to “protect the name” of the Secretary, “stall” the ABC News reporter and ultimately accept the resignation of the donor just two days later.

Copies of dozens of internal emails were provided to ABC News by the conservative political group Citizens United, which obtained them under the Freedom of Information Act after more the two years of litigation with the government.

A prolific fundraiser for Democratic candidates and contributor to the Clinton Foundation, who later traveled with Bill Clinton on a trip to Africa, Rajiv K. Fernando’s only known qualification for a seat on the International Security Advisory Board (ISAB) was his technological know-how. The Chicago securities trader, who specialized in electronic investing, sat alongside an august collection of nuclear scientists, former cabinet secretaries and members of Congress to advise Hillary Clinton on the use of tactical nuclear weapons and on other crucial arms control issues.

“We had no idea who he was,” one board member told ABC News.

Trump is already attacking Hillary for using her position at the State Department to peddle influence through cronyism. This scandal will surely be added to his arsenal.

Here’s the ABC News video report. Watch the whole thing, this is stunning:

This is simply more evidence that Hillary Clinton has put national security at risk for the sake of her own political needs.

Bre Payton of The Federalist has more:

When ABC News began probing the qualifications of the new appointee to the International Security Advisory Board (ISAB), which oversees the State Department’s nuclear and arms policies, Clinton’s staff tried to hide the truth from the public.

Before he was appointed to ISAB, Fernando donated between $100,000 and $250,000 to the Clinton Foundation. He also contributed heavily to Clinton’s failed presidential bid in 2008.

“This is simply more evidence that Hillary Clinton has put national security at risk for the sake of her own political needs.”

I don’t think it’s established that this poor mook was a “risk to national security”. But I also don’t think that…if he was…that would have impeded Hellary.

It will take decades to reveal what American assets, interests, and secrets the pig sold off. If it’s elected, God forbid, probably never.

Hillary is to the US as Merkel is to Germany.

Since he resigned as soon as they started asking questions, I think we can assume this guy didn’t hand over all that dough to Clinton just to sit on some obscure government board in order to serve the country.

The real question has to be what kind of information gets tossed around that he could make the big money with.

The sad and sorry part of this is that he was most likely the smartest one in the room; and, knowing nothing he knew more than all the others put together.