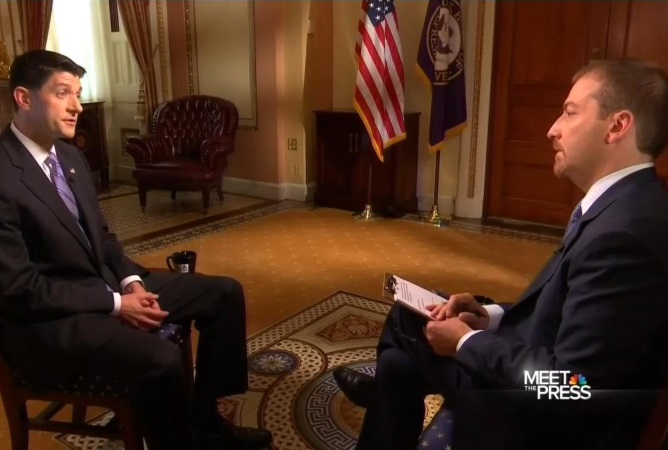 Hillary Clinton: the patriotic choice for president? That seems the implication of Chuck Todd’s challenge to Paul Ryan in an interview aired on today’s Meet The Press.

When Ryan told Todd that as Speaker of the House, he was supporting Trump, Todd retorted: “you just made a case though for party over country.”

How absurd! As Ryan rightly went on to explain to Todd, “No I didn’t! I know Hillary Clinton won’t agree with anything we want to do. She’ll put a bad judge on the Supreme Court. She won’t agree with any of the conservative reforms we’re trying to do.”

But in the mind of Chuck Todd and others in the MSM, supporting the Dem candidate isn’t merely preferable, it’s the only decent, American thing to do!

CHUCK TODD: I sat down with the Speaker of the House Paul Ryan and talked about his dilemma: keep his party united, or reject a presidential candidate whose values he does not share.

PAUL RYAN: Well, first of all, I feel like I have certain responsibilities, as not just congressman Paul Ryan from the First District of Wisconsin, but as Speaker of the House. And imagine the Speaker of the House not supporting the duly-elected nominee of our party, therefore creating a chasm in our party to split us in half, which basically helps deny us the White House and strong majorities in Congress. The last thing I want to see happen is another Democrat in the White House, I don’t want to see Hillary Clinton as president. I want to see a strong majority in the House and the Senate. And I think the way to achieve those goals is to have a more unified party than a disunified party. Now having said that: you know me well, Chuck. If something is done and said that I don’t agree with, that I think that puts a bad label on conservatism, then I’m going to speak out on it, as I have, as I will continue to do, and as I hope I don’t have to keep doing.

TODD: You just made a case though of party over country.

RYAN: No I didn’t! I know Hillary Clinton won’t agree with anything we want to do. She’ll put a bad judge on the Supreme Court. She won’t agree with any of the conservative reforms we’re trying to do. I have spoken with our nominee a number of times about our agenda, about conservative principles, and about the policies we need to put in place in order to save the country, and we have so much more common ground than any other thing, and that is why I’m voting for our nominee.

Well, Chuck Tudd just did make a case for Democrat Party over country.

Elect Hillary Clinton and there will be no more United States of America, not the one we know.

You forget, it is okay when Chuck does it!

Yes, not sure how choosing an influence-peddling corruptocrat with a documented history of gross incompetence and criminal conduct as Secretary of State is the more patriotic choice here.

I hate to mention it, but you accidentally left the R out of his last name.

Politicians place personal gain and party over country consistently. It isn’t about us or the Constitution.

I wish that Politicians were putting their personal gain over the country. That is not true. It is not personal gain. It is the gain of their ruling class.

It is not personal. They put their entire group above the country because they cannot believe anyone but their group is smart enough to run the country. They feel like it is their due to rule us. (not lead us)

Hey Chucky boy Hillary clearly violated federal law by placing highly classified material on her home brew server in her basement. So with out a doubt the dems have truly placed there party before our National Security.

Folks this is just the start. The media is in the tank for Hillary and they don’t give a dam what she did. Trump will be under a blister attack from now till the election.
Fairness and truth will from the media will not happen.

Rats should be their not there. Wish we could edit.

Why do I suspect this whole enterprise between Ryan & brother Chuckie was nothing but a choreographed dog & pony show designed to bash Trump? Paulie trying to position himself as a true leader making the best of a bad situation by “support” of the duly selected candidate of the party voters. While making it known he as a responsible party leader will manfully strive to moderate some of more “out there” statement’s of said candidate.
While Chuckie plays the role he sees himself born to play. A 21st century “uncle Walter” guiding the narrative to the desired conclusion sought by the D.C. players club.

What kind of statement did you expect from the closest thing to official house organ of the Clinton campaign?

These guys want to put their party over country, and continue with the destruction of same. Bah!

The establishment cannot help but reveal the overlapping and convergent interests of its managing factions.

I am the same as I was three months ago, I want to defeat and indict hillary! I am losing heart because Trump does not seem to get it that hillary is his enemy, not Bush and Cruz. He may think they are but when the Demorat machine kicks in shortly he will realize that it is only hillary he must defeat. I am not sure he has the ability to shut his mouth about everything else but her and go for her throat. There will be no revolt at the convention and he knows it unless he keeps attacking everyone but hillary.

I have to admit Mark Finkelstein had me. I thought he purposely sets up his posts on Trump for easy rebuttals. But “How absurd!” Seems to suggest not.
What Chuck Todd is trying to do is to mimic conservative warning that by supporting Trump the establishment Republicans chose party loyalty over conservative principles. Conservative principles are good for the country and are therefore in conflict with party loyalty.
I don’t totally agree with it because Trump’s impeding loss will be also a huge loss for the GOP because he will sink the down ballot candidates. Mia Love is in dead heat now, for instance.

You admitted something over a week ago you support Hillary over Trump so I’m sure you’re happy with what Paulie & Chuckie in tandem are doing.
There’s really not alot more to say about where you stand.
You’re with D.C. & vehemently opposed to the candidate an unprecedented number of voters chose to vote for.

I was told long ago by a good friend who works around the periphery of the DC Intel community that “DC is full of people who would sell out their country in a heartbeat if they thought the sale would give their party one leg up on the other.”
Speaking of putting party over country the media kept their mouths zipped during Obama’s Cairo speech when he proclaimed “America has always been a Muslim country!” First Mosque built in the 1930’s. Today they’re eagerly participating in raising the decibel level the Obama/Rhodes echo chamber is making to cover the fact that Obama is importing 100 Omar Mateens per day into the United States.

Speaking of putting party over country the media kept their mouths zipped during Obama’s Cairo speech when he proclaimed “America has always been a Muslim country!”

The Republican party and, specifically, members of the houses of congress were pretty darn quiet as well.

Write in “country, Constitution and common sense” over “Let me remake America in my image.”

I would love to see somebody reach up and slap the snot out of Chuck Toadie!

Paul Ryan is an example of the patheticness of the Republican political clasthat got Trump where he is.

I seem to remember one poll saying Ryan was winning in his primary, I also have seen other polls saying he was losing. If he wins the primary the people will switch and vote for his opponent. If he manages to win the election, I suspect that there will be a major battle over whether he is reelected speaker.

Assuming Ryan maintains some part of his healthy 73-point lead and defeats Nehlen, Ryan is likely to win the general election as well. He holds an 18-point lead over a generic Democrat (with 11 percent of voters undecided), the Free Beacon poll shows.

So instead we should have a woman who knowingly and willingly subverted national security in an arrogant attempt to keep her dealings at State hidden from the eyes of those who had every right and obligation to know?

Chuck Todd was a small-time shill when he was thrilled to get 2-3 minutes at a time on C-SPAN, and he’s still a small-time shill now that he’s been given a bigger stage. He’s a stark reminder of just how bare the cupboard is in terms of talented and principled journalists in this country.

I am puzzled by the “So instead we should have a woman knowingly and willingly etc”. Why does that follow? If Trump doesn’t pull out of his nosedive soon, you will be right but what do we have to do with his performance? We all sit all over the country wondering what the hell he is doing. We thought the same thing when GH Bush ran against clinton. We kept thinking that he was going to come out with clinton’s trip to Russia and expose the lying, draft dodging bastard for what he was but he never did. Trump had better start to attack hillary and never stop! If it means calling her a lying crook so be it. He called a lot of honorable Republicans liars with no problem at all.

It follows, rudy, because Todd apparently believes that to support Trump would be to place party before country, yet you won’t see him suggesting to a Democrat that supporting HRC is placing party above country.

Ryan is scum, as is every leader of the GOPe. Whores of the lowest class.

Like the old joke says, “we’ve established what you are, now we’re just haggling over price”.