Witnesses claim attacker yelled “Britain first!” while others didn’t hear him yell anything. 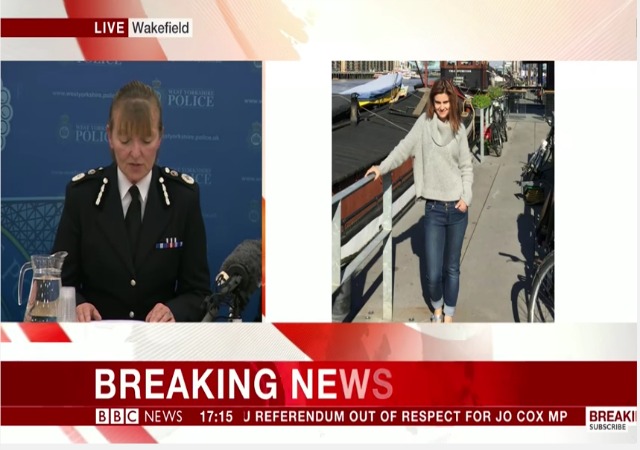 British Member of Parliament (MP) Jo Cox died after a middle aged man shot her on the street in Birstall, located near Leeds.

The police arrested Thomas Mair, 52. Some eyewitnesses said he yelled “Britain first!” when he shot her, but others dispute the claim. Some in Britain have pushed the country to leave the European Union.

Mair attacked Cox after she held her weekly office hours with constituents:

“The gun went off twice and then she fell between two cars and I came and saw her bleeding on the floor,” shop owner Hichem Ben Abdallah told ITV News.

Clarke Rothwell told the BBC that the suspect, who was wearing a baseball hat, lunged at Cox with a knife after he opened fire.

“People were screaming and running from the area,” Rothwell added.

Mair has a history of mental illness. His brother said Mair is not political and cannot tell media how he votes. Cox has spoken out against leaving the EU.

Both campaigns have suspended their activities.

Cox started in parliament in 2015 after she “worked in senior positions for the Labour party, including as an advisor to the wife of former Prime Minister Gordon Brown, and to Baroness Kinnock.”

She graduated from Cambridge University and worked as head of policy and humanitarian campaigning for Oxfam. That job put her in war zones, which put wars in Syria and Iraq in her campaign.

British lawmakers on both sides have used social media to express their sadness and condolences to Cox’s family. She leaves behind a husband and two young children.

The death of Jo Cox is a tragedy. She was a committed and caring MP. My thoughts are with her husband Brendan and her two young children.

Deeply saddened to hear that Jo Cox has died. Sincerest condolences to her family.

The whole of the Labour family, and indeed the whole country, is in shock and grief at the horrific murder of Jo Cox pic.twitter.com/obic5pOCS3

My heart breaks for the loss of Jo Cox and for Brendan and their kids. She was so full of life and joy. Words feel hopeless right now.

We will update when more information becomes available.

This was in GB, which has BOTH gun control and KNIFE control.

“…BOTH gun control and KNIFE control.”

According to Democrats, then this did not happen because it could not have happened.

Neither the US nor GB has effective “crazy control.”

The question is, are we getting to the point where we can reliably identify dangerous crazy? If so, are we willing to 1) assume responsibility to care for the dangerously mentally ill, and 2) capable of safeguarding our civil liberties?

The best thing I can think of is to find better ways to secure consent for mental health treatment.

The better question is how do we do that without giving the government a weapon to take away the rights of people who disagree with the current administration in power.

This, I think, was the logic that was the foundation of the USA.

First let my say that my thoughts and prayers are with the family and friends. I am glad the person has been caught and can now face some sort of justice.

Now, here is a perfect example of why gun control laws don’t work.
Hint, criminals and crazies don’t obey laws, much less gun laws. What will be interesting here is how he got the gun in the first place.