Branco Cartoon – Barbarians At The Gate

Branco Cartoon – Barbarians At The Gate 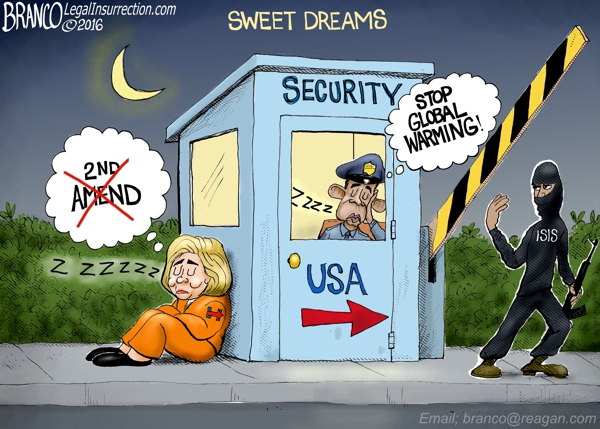 Nah. It’s worse than that.

They aren’t asleep — they’re alert, and mad, and fired up for battle — with the GOP, with Christians, with the NRA, with white bitter clingers, with fly-over rubes and so-called patriots.

Same as it’s ever been.

In the aftermath of 9/11 it was crystal clear. GWB talked about the Axis of Evil — naming North Korea, Iran, and Iraq. The MSM mocked and ridiculed this — such a simplistic world view. Then the DNC Chair (Howard Dean) said, “This is a struggle of good and evil. And we’re the good.” Alas, he wasn’t talking about megalomaniacal dictators whose people are starving, or strong men who use the rape of children to punish dissent — it was the GOP that was the real evil, for the DNC chair.

As it turns the GOPe is the real evil: the left are traitorous, but they hold their traitor flag high. The GOPe is worse: its members have stabbed us in the back, selling out their constituency and their country.

Instead of stop global warming the bubble should have: disarm America.

That is beautiful and extremely accurate.