Suspected Islamists nearly decapitated the elderly priest and left him in a rice field. 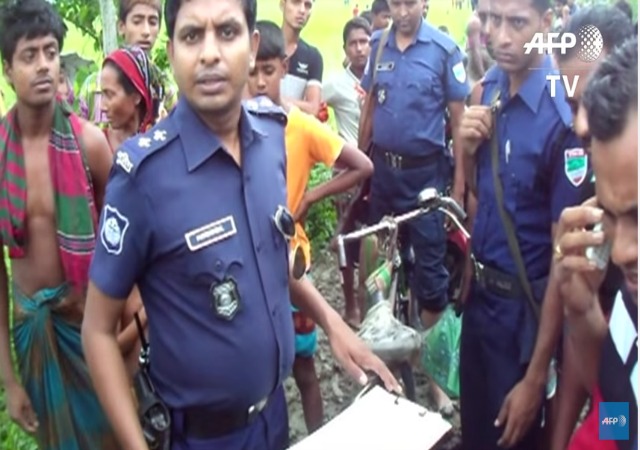 Police suspect Islamic militants killed an elderly Hindu priest in Bangladesh, the latest in attacks on non-Muslims in the Asian country.

Three men on a motorcycle attacked Anando Gopal Ganguly, 68, as he rode his bike “in an isolated rural area nor far from his home” in Jhenidah:

“It seems the attackers were following the priest from his home and killed him at a convenient place,” Mr. Kanjilal said. Mr. Ganguly’s throat was slit, and he was “almost beheaded,” said Mr. Kanjilal, who said he suspected that Islamist militants were responsible.

Jhenaidah lies about 100 miles west of Dhaka, the capital of Bangladesh.

Kanjilal said farmers found Ganguly’s “body in a rice field.” The Islamic State claimed responsibility for the murder, but police said “all the recent attacks were the work of domestic extremists.”

The attack comes a day after suspected militants killed Mahmuda Khanam Mitu, a top Bangladesh officer’s wife who has investigated numerous murders of bloggers. Three men shot and stabbed her nine times as she walked her young son to his bus stop.

“He attended Sunday prayers at my church and then went to his grocery store. The next thing we know he was hacked to death,” Rebeiro said. “I can’t imagine how anyone can kill such an innocent man.”

Attacks began last year with militants targeting non-secular bloggers. But as the year progressed, they included religious minorities and gay activists. Radical Islamists killed Xulhaz Mannan, the editor of the country’s only LGBT magazine and employee at the U.S. embassy, and one of his friends.

Jamaat ul-Mujahideen Bangladesh (JMB) and al-Qaeda affiliate Ansar Al Islam have taken credit for most of the murders. Last year, the Ansarullah Bangla Team sent the media a hit list of people they wanted to kill:

The email — sent after a series of deadly attacks targeting moderates and foreigners — contains a six-point directive that includes telling women to stay at home. It urges businesses to fire any female employees, and says that working outside of the home is a “punishable offense” according to Shariah, or Islamic law. It does not elaborate what would constitute appropriate punishment.

The letter is signed by the group Ansarullah Bangla Team, which is allegedly linked with several other groups that claimed responsibility for killing four atheist bloggers this year.

The list included atheist bloggers – six in Bangladesh and nine abroad – the group would kill if any returned to the country.

Police launched an attack on JMB on Tuesday. Officers killed two members, including a top ranking member, in Djhaka and another in Rajshahi. The authorities said the group planned an attack on a Shiite mosque and killed university professor Rezaul Karim Siddique a few months ago.

the religion of pieces.

i read a headline, (on AoSHQ?) where a local politician blamed Israel…

Islam is a global threat equal to that of nuclear arms of opposing nations during the Cold War. When will people wake to the reality of what Islam truly is, oh right…. the Left loves these people, ask Europe.

Vile animals…… They need to be put down like rabid animals.

I hope this article is reprinted each year. There are so many cases where Muslim atrocities are consigned to the memory hole.
https://legalinsurrection.com/2015/08/noakhali-day-young-hindus-reclaiming-erased-memory-of-genocide/

What is suspected, and will soon be proven to be true, is that this was a MUSLIM TERROR attack.