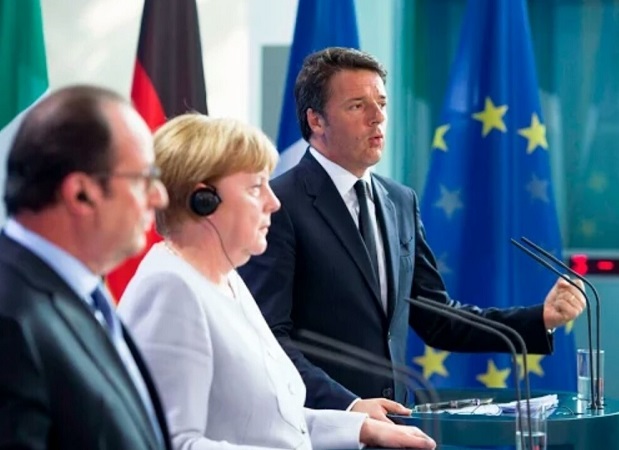 While the doomsday scenario foretold by the EU campaigners and the liberal media of untold misery, political chaos and economic disaster befalling Britain — if the country votes to leave the EU — has yet to come to pass. Instead, the British stocks and pound have rallied back after tumbling down initially in the aftermath of the referendum. Even the liberal-minded Financial Times now admits that Brexit will be “neutral to moderately negative for the UK” but “devastating for the EU”. The newspaper believes that it is Italy that Eurocrats now need to worry about — not UK.

Italy’s ailing banking sector has been drifting towards a crisis, forcing the government to roll out a $40 billion bailout plan this week. Though Brexit did not causing the crisis, as Italy already suffers from decapitalised banking system, high youth unemployment and sluggish growth. However, the departure of UK, EU’s second largest economy and its third biggest donor, could not have come at a worse time for the country. Nor could economic woes and public discontent in the country come at a less opportune time for EU, as Italy heads towards a constitutional referendum in October.

The planned Italian referendum in its current form can’t change Italy’s status within the EU, but the opposition parties could turn it into a campaign against the policies of Brussels — further destabilising the Eurozone and putting pressure of Prime Minister Matteo Renzi’s government. Over the weekend, FT’s columnist Wolfgang Münchau wrote a column titled “Italy may be the next domino to fall”:

The next referendum to be held in the EU takes place in Italy in October. It is not about the union but about Matteo Renzi’s constitutional reforms. The Italian prime minister is taking a gamble which is no less risky than David Cameron did.

He is asking the Italians to agree a number of reforms to streamline their political system. The proposals are sensible. But Italians view the referendum as an opportunity for a midterm anti-government vote. Mr Renzi promised he would resign if he loses. If he does, it will have been a monumental error of judgment on the scale of Mr Cameron’s. Opinion polls have been showing a small lead for Yes but they are likely to be as unreliable as those in the UK. My Italian friends are telling me Mr Renzi may well lose, in which case he would either resign immediately or call elections in early 2017. […]

The political dynamic in Italy is not much different from the one in the UK. The electorate is in an insurrectionary mood. The country has had virtually no productivity growth since it joined the euro in 1999. The Italian political establishment has until recently been as dismissive of its chances of losing the referendum as the British establishment was until Friday morning. They are still dismissive of the chances of a Five Star victory — and will be until the moment it happens.

“The euro as it exists today doesn’t work and we need to consider other alternatives such as a euro 2 or alternative currencies,” Luigi Di Maio, senior leader of the Five Star Movement told the media after Brexit. The push for an in-out referendum on EU received support from Italy’s centre-right Northern League. “Thank you Great Britain, next it is our turn,” commented Matteo Salvini, leader of Northern League.

As UK referendum brought together anti-EU campaigners from both Conservative and Labour Party camps — in Italy too — the opposition to EU is uniting forces across the political spectrum. If austerity dictates from Brussels requiring big cuts in social spending and employment creation has angered those in the Italian Left, uncontrolled immigration and stripping away of national sovereignty has galvanised the voters on the Right against the EU.

Even if the planned referendum does not foresee Italy’s secession from the EU right away, the next three and a half months ahead of the country’s referendum promise be crucial to the Brussels’ fate, as battered EU cannot afford a Brexit-inspired campaign on the continent.

[Author is a analyst reporting from the Netherlands]

All it would take is a congress willing to defund our dues payments.

The threat is that the EU (Germany) will punish the UK by enacting trade protectionist laws. I submit that this might not sit well with the common folk. They have this notion that, today the outsiders, tomorrow us, as taught them by Germany’s high-handed behavior during modern memory.

Yah, no. Germany NEEDS the British market. BADLY. They MIGHT be tempted to try that mess, but saner heads will prevail. Like Mercedes, BMW, Volkswagen, etc.

The anti-EU sentiment is incidental to micromanagement by leftists interests and the social justice-inspired humanitarian disaster (e.g. “Arab Spring”) that brought the consequences and advocates of anti-native/pro-immigrant, pro-choice policies into sharp relief.