AG Lynch: Compassion and Love Are Best Response to Terror

AG Lynch: Compassion and Love Are Best Response to Terror

No. They really aren’t. 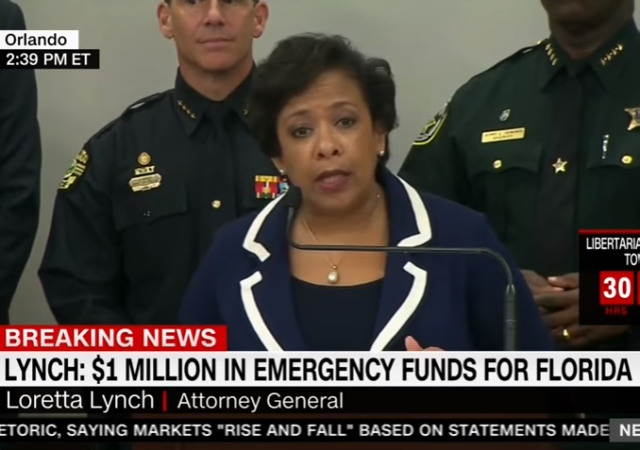 It should come as a surprise to no one that under Obama, the nation’s top law enforcement officer sounds more like a high school guidance counselor than a prosecutor.

The victims of a terror attack certainly deserve love and compassion but for an attorney general to say this is the best response to terror doesn’t inspire much confidence.

Lynch: Best Response to Terrorism Is Love and Compassion

Attorney General Loretta Lynch said that love and compassion are the best responses to terrorism during remarks to the media in Orlando, Florida on Tuesday.

Lynch said the Department of Justice stood in solidarity with the LGBT community “in the light” following a Muslim terrorist’s massacre of 49 people at a gay nightclub last week.

“We stand with you to say that the good in this world far outweighs the evil, that our common humanity transcends our differences, and that our most effective response to terror and to hatred is compassion, it’s unity, and it’s love,” Lynch said. “We stand with you today as we grieve together, and long after the cameras are gone, we will continue to stand with you as we grow together in commitment, in solidarity, and in equality.”

Lynch has been in the news for defending the administration’s decision to redact transcripts between law enforcement and the terrorist, Omar Mateen, during his attack.

Obama and other members of his administration have used harsher words than this when describing House Republicans but for some reason, they want to talk about love and compassion after real enemies of America attack and kill innocent civilians.

If you’re from Massachusetts, this rhetoric may sound familiar to you. In 2007, then Governor Deval Patrick, who’s cut from the same political cloth as any given member of the Obama administration, came under fire following a 9/11 memorial service for blaming the terror attack on a failure of human understanding.

The Boston Globe reported at the time:

Patrick fends off critics of 9/11 speech

Governor Deval Patrick tried yesterday to fend off criticism he has received over his Sept. 11 memorial service speech, when he said the terrorist attacks six years ago resulted in part from “a failure of human understanding.”

“Frankly, I was taught in my church that all violent attack is a failure of human understanding,” he said during an appearance on WTKK-FM radio yesterday. “The families, in the time I spent with them that day after the ceremony, were just absolutely lovely and appreciative.”

Presiding over the state’s memorial ceremonies for the first time, Patrick on Tuesday morning called the events of Sept. 11, 2001, “a mean and nasty and bitter attack on the United States.

“But it was also about the failure of human beings to understand each other and to learn to love each other,” he said. “It seems to me that lesson [of] that morning is something that we must carry with us every day.”

Lynch’s remarks are nothing new, this is a pattern among Democrats. They’re more than willing to call their Republican rivals terrorists and hostage takers, but when real terrorists show up they transform into flower children who wish we could all just get along.

Who sounds more like they’re talking about an enemy, Loretta Lynch on Orlando or Elizabeth Warren on the senate battle over gun control?

.@ChrisMurphyCT said it right: The @SenateGOP have decided to sell weapons to ISIS.

Yes, Governor. The terrorists want to love you, too. They would just “love” to take you out!

So when I end up trapped in a liberal gun free zone without my weapon and a terrorist comes in with guns blazing, I am to stand up and give him a hug and tell him that it’s all going to be OK????
>
The DJWs in colleges and such have done all they could to emasculate the men there, feminists are continuing their tirade about how men and masculinity are worthless for everything woman is superior, we are facing eternal damnation for daring to own a gun for that is something a rel man would never need, and so forth, are all leading to the same end point – national suicide. Now our esteemed Attorney General is making this concept a national goal. Perhaps all that estrogen they are dumping into our water supplies is having an effect after all.
>
One thing I do know for sure is that after the next major conflict that comes to the streets of America, Darwin will solve the problems of this liberal pacification and self defenselessness for us.

– Love and compassion for the terrorists.
– Take guns away from Americans.

Who are these people working for ?

Lynch sounds like a Unitarian cleric. Which is totally consistent with the Collective. They’ve embraced the madness of magic thinking.

The best response to terrorism is to deal with it in reality, which seems the very last place anyone in the Obamic Decline is prepared to go.

Remember: “I pledge allegiance to [don’t think of ISIS]”.

The best response to terrorists is to love them. Love them so much that they’re exterminated before they can commit more evil!

“Daddy, there are people out there saying that other people are mean and they will kill us. That’s not true, Daddy, is it?”

Okay Loretta, why don’t you take that attitude to Raqqa and see how far it gets you.

Even more:go into the streets of the Washington ghetto at night without her body guards.

You get more willing cooperation with a smile AND A SHOTGUN

I think she is right. These attacks do signal a failure of love and compassion — on the part of the terrorists. Indeed, the Hamas Covenant, which is the source of much of the current turmoil worldwide, is blasphemous because of its rejection of a core principal of all three Abrahamic religions: “Love your neighbor.”

We are not responsible for the behavior of Islamist terrorists, who have been trying to conquer the world since before our nation was founded.

“Indeed, the Hamas Covenant, which is the source of much of the current turmoil worldwide, is blasphemous because of its rejection of a core principal of all three Abrahamic religions: “Love your neighbor.””

Whoa. I learn new stuff every day. Help me out here, please. Where in the faith of the Mohammedans are they instructed to “Love your neighbor”? They do have prohibitions against the death of innocents, but one can only be innocent, in their thinking, if one is also a Muslim.

The phrase “Abrahamic religions” is itself a Muslim invention intended to mislead readers into making a false equivalence between Islam and Judaism/Christianity. This not only strategically useful to advance the jihad, it is in accord with Islam’s notion that Islam is the original religion which the Christians and Jews corrupted for their own greedy and nefarious ends.

What, unicorns and rainbows to fight the bad guys?

Oh wait. I see. A Pop Tart chewed into the shape of a gun and in the hands of a 7-year-old boy is the real enemy threatening the groupthink of the collective. Reality must be “suspended” to pacify and secure the collective.

…and that our most effective response to terror and to hatred is compassion, it’s unity, and it’s love,” Lynch said.

I’m fond of the bear hug SEAL team 6 gave OBL. We could use more of that compassion.

… but confiscation and imprisonment is the best response to peaceful gun owners.

Love and compassion? No. The best response to terrorism was given by King Abdullah of Jordan quoting the movie Unforgiven:

“Any sumbitch takes a shot at me, I’m not only gonna kill him, but I’m gonna kill his wife, all his friends, and burn his damn house down.”

As usual, the Dims are lying and projecting. Liz Warren says the GOP is selling weapons to ISIS because they wouldn’t pass anti2A bills? Well,Obama and Hillary were LITERALLY running guns to terrorists through Libya. I wish somebody would just punch that scum in the face when she says such bunk.

“…and that our most effective response to terror and to hatred is compassion, it’s unity, and it’s love,” Lynch said.

The perfect weapon: everyone in the room start singing kumbahyah at the terrorists, each in their own key, somewhat flat, and varying tempi. THAT’LL do it!

She seems a little isolated from reality and Democrat politics.

“this is a pattern among Democrats. They’re more than willing to call their Republican rivals terrorists and hostage takers, but when real terrorists show up they transform into flower children who wish we could all just get along.”

From the DOJ mission statement to ensure public safety against threats foreign and domestic; to provide federal leadership in preventing and controlling crime; to seek just punishment for those guilty of unlawful behavior; and to ensure fair and impartial administration of justice for all Americans. I don’t see any mention of compassion and/or love, none of that nonsense. Her mission is clearly not that of the DOJ. She needs another job.

“We stand with you to say that the good in this world far outweighs the evil, that our common humanity transcends our differences, and that our most effective response to terror and to hatred is compassion, it’s unity, and it’s love,” Lynch said.

Same should be said about gun owners. We do far more good for our communities than obama ever thought about doing. We uplift, build and encourage.

http://nypost.com/2016/06/20/obamas-war-on-omitted/
Even the “explanations” sounded dumb. Here’s Attorney General Loretta Lynch on ABC’s “This Week”: “What we’re not going to do is further proclaim this man’s pledges of allegiance to terrorist groups, and further his propaganda.”

Further his propaganda? Seriously? The answer to Islamist jihad is to black out the words?

Lynch never did anything this absurd in all her years as US Attorney here in New York, so you know the order came down from above.

It makes you wonder: Who at the White House feels compelled to send women of color out to humiliate themselves on national TV?

I agree, “all violent attack is a failure of human understanding” that the appropriate response is delivered quickly, accurately, and as repetitive as necessary in a sufficiently large and massive projectile, preferably of hollow point design when delivered by a handgun. However, in a pinch, a rock may suffice.