Why ‘Chewbacca Lady’ Became the Most Viewed Facebook Live Video

Why ‘Chewbacca Lady’ Became the Most Viewed Facebook Live Video

Turns out, joy is contagious 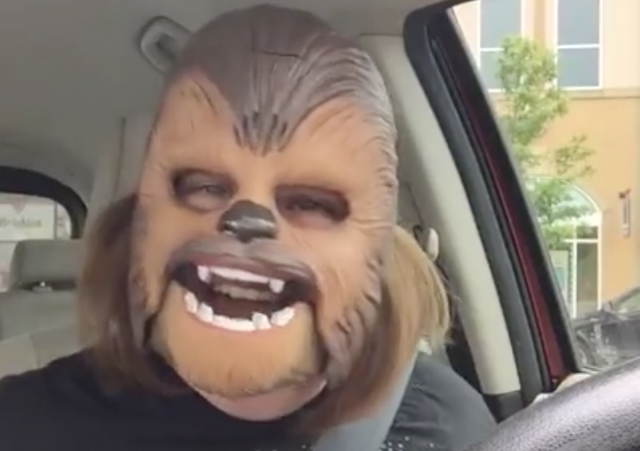 What’s the key to viral video-making? An appreciation for the small things in life, a talking Chewbacca mask, and an infectious belly laugh. Or it was in Candace Payne’s case.

After buying a talking Star Wars mask at Kohl’s as a belated birthday present to herself Thursday, Candace Payne sat in her car, flipped on her phone, and recorded what would be the single most watched Facebook Live video in the history of Facebook Live videos.

More than 130 million people watched Payne’s video which was posted with the caption, “it’s the simple joys in life.” The previous Facebook Live record holder was Buzzfeed’s watermelon smashing video, which had about 10 million views.

If you haven’t seen her video, it’s four minutes of your time well spent:

As a thank you for inadvertently promoting their store, a Kohl’s crew showed up and showered Payne and her family with Star Wars gifts.

Which then resulted in an interview with the local news station:

The response to Payne’s video was overwhelming positive. 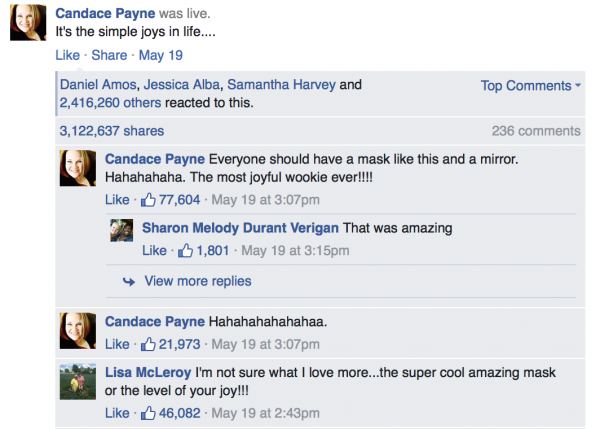 It’s impossible to be sad after watching Candace giggle with glee over such a silly little gift. But that’s really the point. Joy is infectious; far more so than negativity. And though we tend to fret over life’s stressors, it’s the aggregation of simple little pleasures that make our lives wonderful places.

This would be funny if trans-species was not the next normalization effort; but, with progress of first transhuman orientation and behavior (i.e. reactive and planned parenthood), then transgender (e.g. homosexual, crossover), and transsocial (e.g. not “rape-rape”), we must assume the State-established pro-choice church, and the left-wing ideological monopolists, are considering every tactic to debase human life, and thereby suppress competing interests.

That said, it is funny outside of the twilight zone (i.e. penumbra) in what remains of normal space.

That is pretty funny. What is not however, is that Disney now owns my entire childhood. Star Wars, Marvel, X-Men, TMNT, sports television all owned by the all-grabbing, money-clamoring Disney.