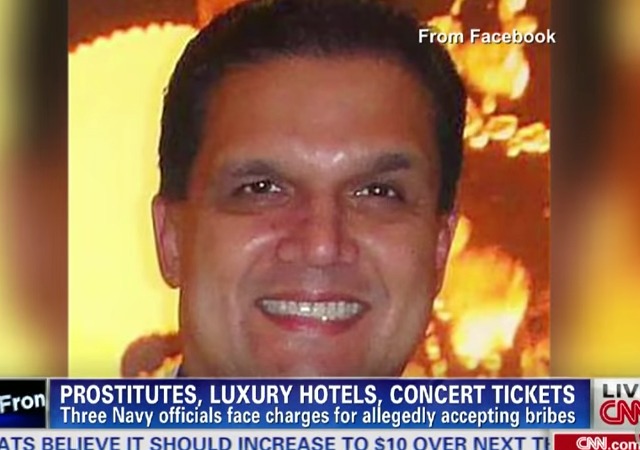 Cmdr. Michael Vannak Khiem Misiewicz, 48, pleaded guilty earlier to one charge of conspiracy and one charge of bribery. Prosecutors said that for nearly two years, he accepted gifts, travel, stays at fancy hotels and the services of prostitutes — all paid for by Leonard Glenn “Fat Leonard” Francis, the owner of a port servicing company that supplied Navy ships across the Pacific.

In exchange, Misiewicz gave Francis confidential information on ship schedules for the U.S. 7th Fleet, for which he served as deputy operations officer in 2011 and 2012. He also used his influence to try to steer ships to ports in Asia that were controlled by Francis’ company, Glenn Defense Marine Asia, prosecutors said.

The investigation began more than three years ago when federal agents arrested Fat Leonard in San Diego after they tempted him with “a meeting of admirals who hinted they had lucrative contracts to offer.”

He pleaded guilty to fraud and bribery charges, ruining his firm Glenn Defense Marine Asia. But it also opened a Pandora’s Box that showed mass corruption within the Navy. From Financial Times:

According to the Washington Post story, Fat Leonard used the allure of sex with prostitutes as a potent bribe. On one occasion, he allegedly videotaped a navy officer having sex with twin Vietnamese prostitutes in a hotel in Singapore. On other occasions, he procured prostitutes from escort services to entertain officers at parties after official events.

The justice department declined to comment on the details, but said “the investigation into those involved in this long-running corruption scheme continues apace, uncovering substantial wrongdoing”.

A California court “unsealed an indictment of Michael George Brooks, a former US naval and attaché” in Manila, on charges of conspiracy to commit bribery and criminal forfeiture.” He allegedly provided Fat Leonard’s firm “with internal navy documents” and gave “diplomatic clearance for Glenn Defense Marine vessels to enter Philippine harbours.” The charges even say Brooks allowed the businessman “to ghost write its own annual evaluation.”

The court then unsealed the indictment of Bobby Pitts, “a former US Navy commander who ran a logistics command in Singapore,” and Lieutenant Commander Gentry Debord, “a logistics officer.” Financial Times continues:

The same California court unsealed a second indictment later on Friday of Bobby Pitts, a former US Navy commander who ran a logistics command in Singapore. It accused him of providing Fat Leonard with a copy of an NCIS report on its investigation along with an internal email showing that officials planned to ask the Thai government if the contractor had billed the navy for force protection services that the Thais had provided for free. In return, Mr Pitts received paid entertainment, including the services of prostitutes, the indictment alleges.

A third criminal complaint unveiled on Friday accused Lieutenant Commander Gentry Debord, a logistics officer, of giving Fat Leonard internal navy documents, including pricing details on his competitors, and paid invoices he knew were inflated. According to the complaint, Cmdr Debord and his family were treated to stays at luxury resorts in Thailand, Indonesia and the Philippines while he enjoyed trysts with prostitutes. In coded emails with an employee of Fat Leonard, he requested prostitutes, which he called “cheesecakes” and “bodyguards”. One Glenn Marine email referred to the officer as “sex-crazy Debord.” He is accused of conspiracy to commit bribery over a five-year period ending in early 2013.

The Washington Post spoke with David Shaus, a junior officer assigned to the Navy’s Ship Support Office in Hong Kong, over the Fat Leonard situation. Shaus confronted Francis in 2004 when he received a huge bill from the businessman:

Schaus told The Washington Post that he summoned Francis for an explanation. “He became furious, accusing me of calling him a liar. And I told him, ‘I am calling you a liar.’ He said, ‘Lieutenants don’t tell me what to do. Do you know who I am?’ He was being profane and banging on the table.”

Afterward, Schaus said he was told by other Navy officials to back off, something that he said invariably happened when he raised questions about Glenn Defense.

It happened again a year later, but this time Shaus alerted NCIS over the bills from Francis. An agent interviewed him, “but the case went nowhere and only provoked backlash.” Shaus said everyone on the boat ending up him. He decided to resign from the Navy commission for many reasons, but “the endemic corruption I observed during my short tenure of working within the supply world was certainly a major factor.”

Where does it end? No one knows for sure. The Washington Post reported that Adm. John Richardson, chief of naval operations, told 200 admirals “that about 30 of them were under criminal investigation by the Justice Department or ethical scrutiny by the Navy for their connections to Francis.”

Eleven defendants have pleaded guilty with no trials, which means “only a small fraction of the evidence has been made public so far.”

“Shaus said everyone on the boat ending up him”

I suspect the missing word is “hating”.

When I was a kid I watched the series “Branded” with Chuck Conners. At the opening they show him being stripped of his rank and other insignia on his uniform before sending him out into the wilderness.

This is what they should do before sending all these corrupt Officers off to Leavenworth to face the justice they deserve.

That grates so hard against it actually hurts to read. “Naval soldiers”. NAVAL SOLDIERS!?

Sailors. People in the Navy are sailors. One of the things I hate about people with apparently no connection at all with military matters writing about military affairs.

I wonder how you feel about a “CIC” who speaks of corpsemen.

The writer is a moron.

Tell me again, why I should be a whistleblower?