A major loss for the “safe space” crowd. 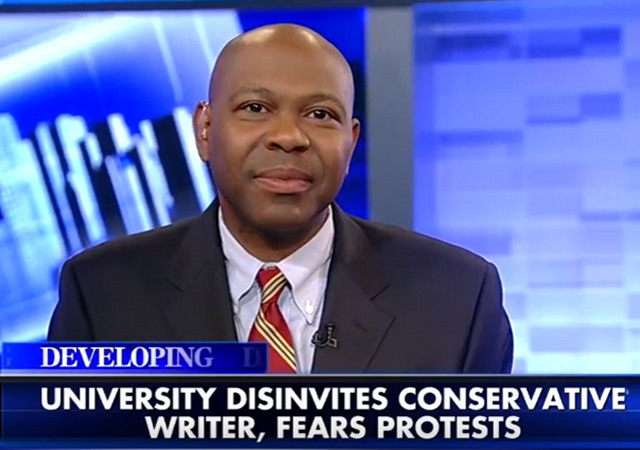 Riley addressed the situation at the Wall Street Journal:

I Was Disinvited on Campus

‘Progressives rule higher education,” write political scientists Jon Shields and Joshua Dunn Sr. in “Passing on the Right,” a new book on the dearth of conservative professors. “Their rule is not absolute. But conservatives are scarcer in academia than in just about any other major profession.”

Profs. Shields and Dunn aren’t exaggerating. In the humanities and social sciences, they note, surveys show that the percentage of self-described Marxist professors is around 18%, or nearly double that of self-described Republicans…

Yet you don’t have to be in such distinguished company to earn the ire of the campus left. Last month I was invited by a professor to speak at Virginia Tech in the fall. Last week, the same professor reluctantly rescinded the invitation, citing concerns from his department head and other faculty members that my writings on race in The Wall Street Journal would spark protests. Profiles in campus courage.

Riley appeared on the Kelly File on Wednesday night to discuss the issue:

The good news is that Virginia Tech has reversed its decision and re-invited Riley to speak.

We welcomed the statement this morning from Virginia Tech University’s president Timothy Sands saying that the university is inviting Jason Riley to speak on campus. President Sands’s decision to invite Mr. Riley reverses a disinvitation sent to Mr. Riley last week. This is very good news, and it has now been confirmed by telephone to Mr. Riley by the dean of the business school. The dean has also retracted his “open letter” statement claiming that Mr. Riley was never invited in the first place, and promised that he would make a public apology. Mr. Riley has been offered his choice of giving the BB&T lecture, which he was originally invited to present, or to speak in another venue.

Reversals of this sort on the part of a university are extremely rare. This one came about because of the pressure of thousands of people who responded to our original report on the invitation in National Review, the army of bloggers and tweeters who took up the issue, Mr. Riley’s compelling op-ed in the Wall Street Journal, and his appearance on Fox with Megyn Kelly. Behind all these lay one indispensable piece of evidence: Mr. Riley had saved the e-mail invitation that the authorities at Virginia Tech said did not exist.

Mr. Riley benefited from a degree of media access and support that is seldom available to the casualties of political correctness. His victory is to be celebrated, but we should not forget the many others who get similarly dismissive treatment from colleges and universities but who do not have recourse to mass media.

Even though this particular episode is over, we have to ask ourselves a question.

What would have happened if a college disinvited a black liberal writer from campus because they feared conservative students would protest?

Regarding your question at the end….It’s all droids vs Wookies.

There is such irony in the label “Progressive.”

This is not progressive.
It is oppressive.

Good point. However, I think they are Regressive. They want to return an old three class model of society:
1) Royalty (the political DC ruling class)
2) Nobles (The crony socialists that provide money – Soros, et al)
3) Serfs – all of us who be the servants and slaves of the other two classes.

This model is not new. Nor is it progress. Oppressive — yes.

It is important to study history. The English Civil War pitted the roundheads (personal responsibility) against the cavaliers (the royal elites).

Seems we have been fighting this political war again and again here.

So, today, it is very sad to note that the only personal responsibility and freedom you are allowed to take is to choose your gender or how you have sex. But freedom of thought and economic freedom are being surpressed because any privilege granted you by the founding fathers is evil.

Jason Riley is top-drawer. Virginia Tech is lucky he deems to grace them with his presence.

If the same outcry occurred every time a conservative speaker was dissed or had their rights subjugated to the demands of the leftist grievance-mongers, we wouldn’t be so abused.