“Gender is a societal construct.” 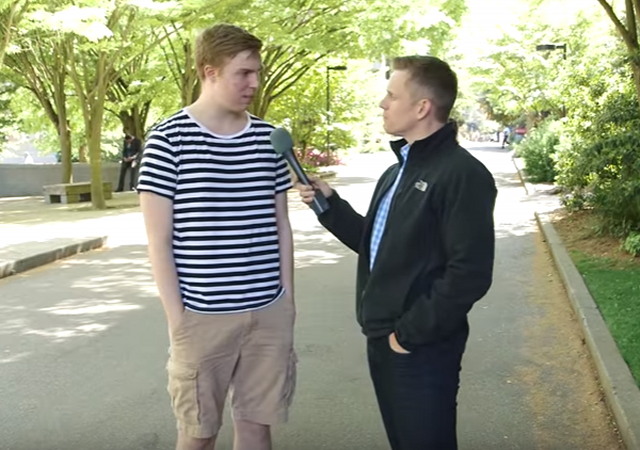 The Family Policy Institute of Washington recently spoke with some students from Seattle University and asked them simple questions about gender and the differences between men and women.

Here’s a description from their blog:

This episode, filmed near Seattle University, a Jesuit private school, asks college students if there is a difference between men and women. Some of the answers are hilarious, bizarre, and alarming. Is this really what our institutions of higher education are teaching?

News radio KEEL gets into specifics:

Repeatedly, students insisted that “gender identity” chosen by a person is more important than biological differences the sexes.

Now watch the video and prepare to be amazed:

Everyone is trying so hard to give politically correct answers that no one states the obvious.

All I could think of was this classic scene from Kindergarten Cop:

Was that so difficult?

Is this the end of feminism? Yes, if there are no differences between men and women.

Is this the end of female sports? Yes, if males who self identified as females start to dominate scholarships and teams previously reserved for women.

They will have to rename it Title 9.0 too.

How about prisons? Is it the end of single sex prisons?

This is the “Me! Me! Me!” generation.
What one of the students said:

…so, … if you want to use a bathroom because that’s the place and that’s the space where you feel comfortable and safe in doing so, then I think that’s completely fine.

How can someone be transgender if gender is just a societal construct?

“the foolish are wise in their own eyes”

And by the way, how stupid are these kids?

-Men carry XY chromosomes. Men have a penis and testicles. They participate in reproduction by producing sperm. They do not, cannot, carry out a pregnancy. They do not have boobs and cannot produce breast milk. Hair grows in their faces, sometimes in the back, and the chest too.

(Ok. I know. Some men get to grow boobs too. But they still cannot produce breast milk, can they?)

Actually, there is one case that I’ll call “medical transgender” – XY with Androgen Insensitivity Syndrome. In this case, the genetics are male, but the cells don’t respond to androgen (they convert it to estrogen), so you get everything feminine except the uterus and ovaries (they’re undescended testes).

Generally, this kind of thing is discovered when the girl fails to menstruate.

Anyway, people who think they can change their sex by chopping off bits – that’s a mental illness. XY AIS people are truly male at the cellular level, but female at the macroscopic level.

I wish more people would realize this is a “mental health issue” and not a “civil rights issue”.

Hmmm, I note the question focused on ‘gender’ and not ‘sex’, which was briefly discussed at the end. How many of those young students would object if a member of the ‘opposite sex’ appeared in their restrooms? Would they be so complacent if a male entered a female restroom only with voyeuristic intent?

These kids are on a VERY slippery slope!

I find it interesting that people with that kind of mindset say you can choose your gender, something that’s a biological fact, but then that homosexuals were born that way.

You realize that Kelinda can suck the water right out of you, don’t you?

“‘Depending on how the courts rule on the bathroom issues, it may be a pretty valuable tool to have on the female students if they go to the bathroom, not knowing who may come in,’ board member Chuck Hughes said in referencing concerns about HB2, according to the Salisbury Post.

The Rowan-Salisbury Board of Education agreed this week to remove language that kept students from taking defensive sprays onto campuses. The district is located about 40 miles northeast of Charlotte.”

… just as Barack Obama has spurred on the gun industry, now, he is promoting the sale of defensive “pepper spray” for bathroom users.

And these are the people the Left thinks should be the deciders in the future of our country? If they don’t know the difference between men and women why do we even allow them to vote?

But, this confuses me, if there is no difference between male and female, why would someone want to be the other one?

I tried to plug a transgender cable that self-identifies as male into a cisfemale port on my computer, but it didn’t work.

Can I sue the computer manufacturer?

Only if they are OEM, Optional Equipment Mating.

Can’t wait for the Rio Olympics where men wearing dresses will finally be able to compete in the same competitions alongside of women.

This will transfer into the workplace and finally put an end to the myths and down right statistical lies of feminists that women are paid 70% on the dollar as men because any highly paid individual that appears to look like a man can look any feminist straight in the eye and say I am just as much a woman as you.

None of these kids was raised on a farm or ranch.

They are totally cut off from the natural world, except for National Geographic.

I saw a news story a year or two back in which a trans-sexual contestant in the Phillipines was explaining to an interviewer that “her” faux female part was just “her” inverted penis. ( this was the same contestant who was briefly kicked out of T-Rump’s Ms. Universe contest because she had been a he and T-Rump caved and let her back in )

It occurs to me now that whether before and after, a transgender male is still only thinking with their d**khead.

So, maybe taking them to a farm and sending them on a hunt for a transgender cow would be a good way to steer them out of their self imposed delusions of what gender they really are.

On the farm or ranch, you’ll find all kinds of aberrations. Two-headed calves, killer sows that cannibalize their litters, etc.

Now I understand why you are such a good lawyer. You have seen it all before getting into law, on the farm!

This is the new losers club. This demonstrates how easily the youth can buy into any narrative no matter how idiotic it is. This is stupidity to infinity and beyond.

My sig self identifies as an iPhone. I no longer need a license to carry it with me.

I hope the interviewer was giving out Participation Ribbons after he finished his interviews with all the children being babysat…er I mean going to college.
I personally identify as President of the United States. I think I’ll call up Air Force One and take a fact finding trip to Tahiti. On the taxpayers dime of course.

Gender may be a societal construct but sex is not. Transgender “women” cannot bear children no matter how strongly they identify as female.

Still any doubt Obama is gay and Michelle is a beard? (A big, ugly one at that.)

Sheep without a Shepherd.

I guess that they don’t teach biology or anatomy/physiology in middle and high school any more. Must just teach social justice.