VIDEO: George Washington U. Students Not Ready for Hillary

VIDEO: George Washington U. Students Not Ready for Hillary 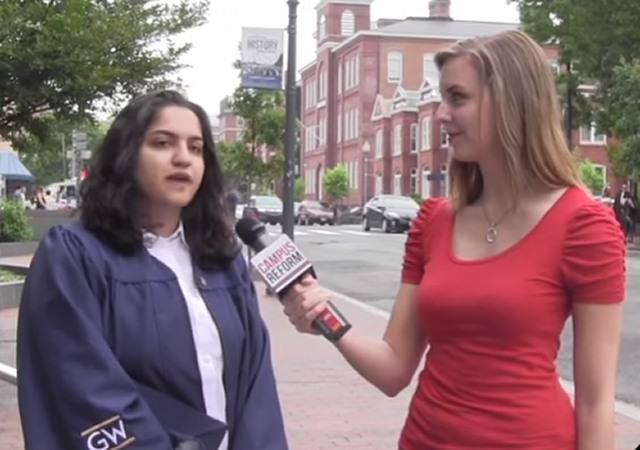 If the video below is indicative of a nationwide trend, Hillary Clinton has a serious problem with college aged voters in the upcoming election.

Campus Reform visited George Washington University and asked students how they felt about the Democratic front runner and not only do they not seem to like her, they don’t trust her.

The reactions of young women were particularly interesting:

Millennials just don’t trust Hillary Clinton, and they’re sick of being told they should support her simply because she’s a woman.

Campus Reform caught up with several students and young people during commencement at George Washington University last week, and while most expressed reservations about Clinton’s candidacy, nearly all were resigned to her eventual nomination for president.

“I just think that, yeah, there’s a lot of feminist pressure to vote for Hillary,” one woman acknowledged.

Another, describing herself as “definitely” a feminist, even went so far as to say “I don’t know if I would support Hillary if, like, she was a man.”

Several other young women likewise told Campus Reform that they have experienced pressure to support Hillary based solely on gender, but expressed more resentment toward the notion.

Hillary Clinton and other prominent Democrats don’t seem to realize that Millennials have no memory of the first Clinton administration. For many of them, their first memory of Hillary is the woman who lost the Democratic nomination to Obama in 2008.

Their political view is also quite different than Democrats of Hillary’s generation.

The Christian Science Monitor recently put the issue in perspective:

Why Hillary holds so little allure for many Millennials

Unlike some of her peers, Hanna Smokoski says she has a lot of respect for Hillary Clinton and the “really impressive career” in politics she’s had during the past few decades.

It’s just that “history has already moved beyond Hillary Clinton,” said the young graduate student, even as she jumped and hooted for Sen. Bernie Sanders during his massive rally in Prospect Park, Brooklyn, on Sunday – which at an estimated 28,000 attendees was his largest to date.

“I mean, I would be really excited for the first female president, but it’s just that we’ve already progressed further left than her now,” says Ms. Smokoski, who works as coordinator of a GED program while studying at Teachers College at Columbia University.

Hillary will probably top Trump with Millennial voters but she can’t count on the same level of enthusiasm from young people that Obama enjoyed in 2008 and 2012.

Here’s the real problem: ‘Millennials’ have no concept of history beyond what they consume through social media. We have seen the rise of a generation that George Santayana spoke of:

“Those who cannot remember the past are condemned to repeat it.”

It would be nice to have a woman as president. We just don’t need any woman to fill that desire. We need the right woman for the job and Hillary isn’t it.

When Marcus Aurelius died, anno 180, he was succeeded by his son Commodus. Gibbon considered that the start of Rome’s long decline and fall. And he wrote six weighty volumes explaining why.

Analogously, I strongly suspect that future historians will place the start of the American experiment’s decline and fall in 1919, with the XIX Amendment. There are excellent arguments for that belief, though nobody will make them today. Maybe in two hundred years or so.

But they do know the Clintons. They know their history, that the Clintons bgrought about a golden era of peace and prosperity, and that some small-mainded Republicans tried to bring them down. That’s the official line, unfortunately. (What scandals?)

Female chauvinists, as their male chauvinist counterparts before them, are losing ground to a traditional reconciliation of moral and natural imperatives.