“He is the hated gringo” 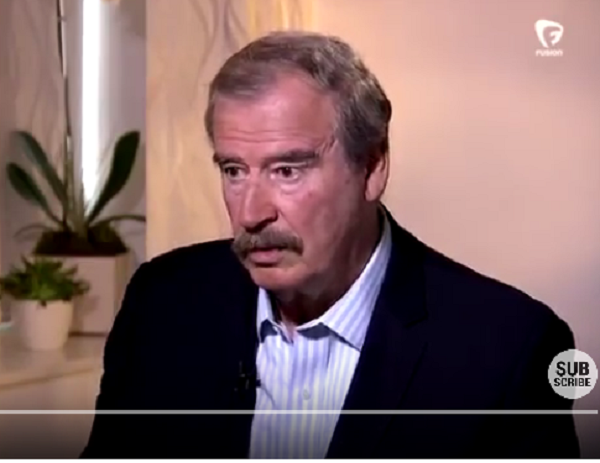 Mexico’s former president had some words for The Donald. And not very nice words either.

Fox claims Trump owes American workers an apology for, “all the imports from China and Mexico.” “Please apologize to them,” Fox implored.

Also, @realDonaldTrump, since you're fooling all U.S. workers, I believe you owe an apology as well. pic.twitter.com/3UQIYKxK2o

The cornerstone of Trump’s campaign is his claim that he’ll build a big beautiful wall along the U.S. southern border with Mexico and require the Mexicans foot the bill. Months ago, Fox said Mexico certainly would not pay for the “f*cking wall.”

Tuesday, Fox doubled down on the sentiment and called Trump a false prophet.

“Wake up Americans,” Fox warned. “He is a false prophet.”

“Think about it, analyze what he’s proposing,” Fox continued. “Count the amount of lies he says in every speech, everyday he lies and lies with figures because his sole interest is to do personal business.”

“He is the hated gringo because he is attacking all of us,” Fox said. “He is offending all of us. Imagine, that could take us to a war — not to a trade war.”

Before his expletive-filled rant regarding Trump, Fox and Mathis discussed the North American Free Trade Agreement (NAFTA), which has been a highly contested topic in the 2016 presidential election. Fox said corporations like Chrysler, Ford Motor Company and General Motors survived the bailout thanks to the trade agreement because it used taxpayer bailout money to become competitive again in all three North American countries.

“The partnership deal of NAFTA nourishes the competitiveness of the three economies of Mexico, US and Canada,” Fox said. “… The U.S. cannot compete by itself against others. If Trump says, ‘let’s enclose by ourselves, let’s build walls and then impose heavy taxation to imports,’ he’s going to asfixiar (asphyxiate) the U.S. economy.”

You can listen to the interview here.

I wonder, I just wonder, if Trump has Mr. Fox doing this on purpose. The two men must know each other. They travel in similar circles.

It just has to help Mr. Trump in the polls. And Mr. Fox isn’t stupid.

Mr Fox is wrong in so many levels …

Let me start by clarifying that I am not a Trump fan or follower. I just don’t like him for President. But what the heck, the words “President Clinton” or “President Sanders” give me the goosebumps.

And now we have Mr Fox calling Donald Trump “The Hated Gringo.”
Did it occur to Mr Fox that “The Hated Gringo” has the support of a considerable number of Americans? We may not like it that much, but at this point there’s a chance this “Hated Gringo” could become President of The United States. Will Mr Fox continue to call him “The Hated Gringo” ?
Maybe it is Mr. Fox that should apologize to the American people.

And he also says that “The U.S. cannot compete by itself against others.”
Excuse me?
The US was competing very well by itself before the NAFTA. It is Mexico the one getting the most benefit.

It’s touching the way so many foreigners have “come together” to whip up votes for Trump. And, for Señor Fox, at considerable sacrifice—not for him personally, of course, but for the overtly parasitic portions of the Mexican economy.

So, is anyone selling “Hated Gringo” tee shirts yet? Or bumper stickers? They’ll sell like hot tamales.

Could Mr. Fox be any more responsible? I mean he threatened war over being offended and then called Trump a slur (gringo).

Fox was counting on The United States continuing to be run by Los Pendejos — Obama, Clinton, Ryan, McCain, Romney, Cantor, Rubio and the rest of the Open Borders Cartel.

Obama, Clinton, Ryan, McCain, Romney, Cantor and Rubio must have gotten together and clicked thumbs down.

I see that failed former presidents who just can’t stfu are not unique to the United States.

To be sure the Donald needs to apologize to a lot of people, John McCain, for one. Yet he said he won’t apologize to McCain because after he made his POW comments his numbers went up. Somehow Trump is expected to be taken seriously…

Trump is Coulteresque: say whatever outlandish thing to get media attention and soon people will think you have balls, when you never did

“take us to a war”. Bring it payaso. The last one didn’t work out to well for you.

Why is anyone calling this guy “Mr. Fox”…he is a cartel bought and sold dried up loser.

Why does Fox look like Joe Biden in that picture? Has anyone seen both of them together, ever?