Another controversy in a long list of VA hospital scandals. 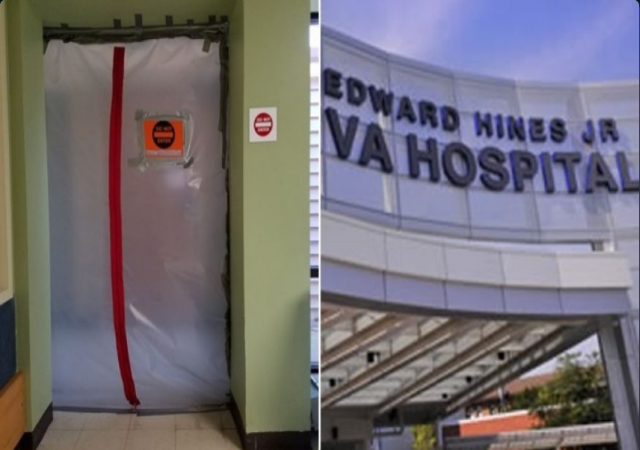 Veterans at the Edward Hines, Jr. VA Hospital have demanded action to clean the black mold in their housing complex, which has built up for the past 10 months.

Veterans Affairs documents indicate officials at Edward Hines, Jr. VA Hospital knew about the black mold infestation in August 2015 but conducted no testing until mid-April 2016 and have yet to clean up the problem – though they are promising to act soon. The mold is contained in two rooms of the Residential Care Facility (RCF), a separate building housing 30 residents for indefinite stays.

“I was going by the hallway and the door was open. The back wall was all moldy black,” 81-year-old resident Raymond Shibek told FoxNews.com. “I went and told the director of nursing. She said, ‘How did you see that?’ I said, ‘The door was open.’ She said, ‘You weren’t supposed to see that.’”

Resident Dan James said the staff knew about the mold, but only began taking steps when the veterans “started getting aggressive about it.” Fox News continued:

The mold was first discovered by a maintenance worker who saw a black substance on the wall behind the lockers, said resident Charles Scott, 26.

It was then that the residents began an odyssey to have the rooms sealed off and the mold removed not only from the locker room, but a nearby storage and maintenance room, Scott said.

“We are really worried about this, you have a lot of people with respiratory illnesses,” Scott said. “Another VA hospital had Legionnaire’s Disease and a bunch of people died. How do we know that won’t happen to us?”

The veterans do not know when the mold began to grow, but told Fox News that many “patients have fallen ill, even died, over the past years.” They could not confirm if the mold caused any of it.

Rita Young, the hospital’s chief of Safety and Emergency Management Services, sent a memo to the union on March 4 updating them on the mold. She told them “the drywall in two rooms contained ‘black mold’ caused by a leak pipe that has been repaired.” The VA officials asked for a “hazardous material abatement” the following day.

Residents sent a letter to Sen. Mark Kirk (R-IL) in April, demanding help from Congress, especially since he chairs the Senate Appropriations VA subcommittee. He shot a letter to the VA supervisor:

“The saddest part about this work is that there seems to be no bottom – each time we discover a problem, there always seems to be a cover-up, instances of willful incompetence, and/or another problem right around the corner.”

The same VA hospital faced allegations of cockroaches in the meals for the patients. Health inspectors raided the hospital for a day where they “found outdated food, food that was not labeled correctly or missing labels, and overwhelming filth.”

Welcome to “government health care”. Not unlike Cuber or Venezuela. Except with a LOT more money…

Those crooks need soon prison time to think about stuff.

Corruption at a unionized hospital in Chicago? I’m shocked, I tell you!

The mold is but a signal that there is a leaky pipe or other source of water that the mold needs to grow. It can not be eliminated by cleaning the wall they need to have maintenance fix the problem.

Wow, what an incredible show of action. He ‘shot a letter to a VA supervisor’.

What the fuck is this, Team America Hans Blix?

These pieces of shit in the VA are never fired and never held criminally liable for DEATHS that happen due to their incompetence, negligence, or intentional fraud. At best a scapegoat ‘retires’ with full benefits.

Show me a single supervisor or manager outright fired with no benefits over incompetence at the VA and MAYBE I’ll believe you are interested in anything other than a stupid sound byte.

Separating military offered the option of using one of the Civil Service insurance options with the Government picking up the same percent of the premiums, out of pocket expenses and co-pays as the degree of disability the service member suffers. Any treatments for injury while on active duty to be covered 100%. This gives the service member the option to find his/her own doctors and hospitals and therapists, etc. Quality of service may also improve since providers are subject to the same malpractice protections as the rest of the population.

Nice idea but the only problem with that is the process of getting out of the military is rather quick and not very thorough. I checked out and got my final medical clearance and was found in perfect health by the Marines. A couple of years later I joined the National Guard and the incoming medical exam found several issues with my health. Some how I got flat feet and high blood pressure from when I left the Marines and joined the Guard. They would need independent medical inspections of all EAS military personnel to really find out what the service related issues are. As it is it’s like buying a house and the inspector is the seller.

Starting with Capital Hill and expanding to all federal workers, health plans should be transferred to the VA. Congress needs to be treated as if they were mortals like the rest of us.