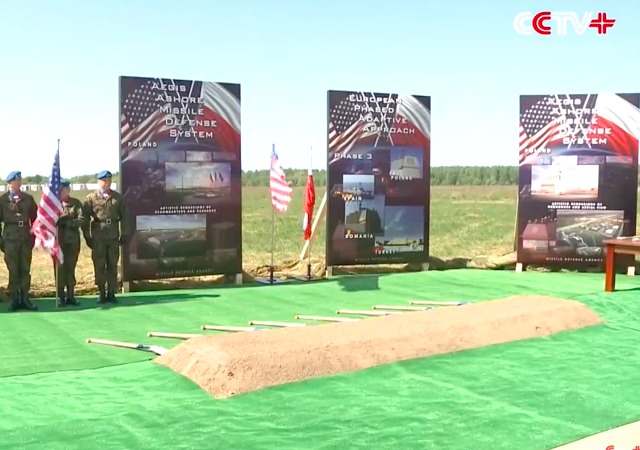 The United States and Poland have broken ground on the site of the new defense missile site, which will probably anger Mother Russia. But what else is new?

Deputy Defense Secretary Bob Work tried to assure by reminding them the site will only protect NATO members:

“Today we stand at a strategic inflection point and a change in the strategic landscape,” Work said at this Polish military base situated in a northern village. Europe and NATO face a range of new and complex security challenges, he said. Addressing those challenges will require a “more capable NATO alliance, one that continues to evolve and adapt to threats,” he said.

In efforts to protect the alliance, NATO is making important investments, including in missile defense, he said.

Since 2014, Poland has asked NATO for more defense after Russia invaded east Ukraine and annexed Crimea. Vice President Joe Biden traveled to Poland only days after Russian President Vladimir Putin completed the annexation to promise Poland and NATO allies the U.S. will protect them.

In January, Poland announced a plan to implement a “46,000-strong” National Guard. The $42 billion upgrade is the first in over a decade. NATO wants to “set up six command and control centers in Bulgaria, Poland, Romania, and the three Baltic countries of Estonia, Latvia, and Lithuania.”

Poland endured some of the worst war crimes in World War II due to the Molotov-Ribbentrop Pact between Germany and USSR. I wrote this at Breitbart News to justify why Poland has every right to have concerns about Russia, especially after Putin praised the Pact:

Putin’s remark disregards Soviet aggression that belies the claim that the USSR “didn’t want to fight.” The nation did fight–just not with Germany. One week later, on September 1, 1939, Hitler invaded Poland and started WWII. The Soviet Union invaded Poland on September 17, 1939, which violated the Soviet-Polish Non-Aggression Pact. With both countries in Poland, the USSR and Germany signed an agreement to coordinate the militaries in the country.

The invasion was the scene of the Katyn massacre by the Soviet secret police in April and May 1940, considered among the worst war crimes of that period. Polish army members and citizens were sent to labor camps. The Soviet police interviewed the army and police officers to decide who should live or die. In March, Stalin and members of the Communist Party decided to execute almost 30,000 Polish citizens as a way to quash any attempts at a future Polish army.

Poland felt betrayed by the Allies, especially after the USSR established a puppet Communist government in the country. The first election in Poland voted to allow the Soviet Union to be in control of Polish affairs. This government agreed to the Soviet annexation of the eastern territory and allowed the Red Army on Polish lands. Therefore, Poland was not officially a member of the USSR, but a satellite state.

Of course, Russia constantly plays the victim when it is them who has invaded and threatened former Soviet Republics. After they tore apart Ukraine, Russian diplomats issued hidden threats against Estonia and Latvia. Russia even threatened Sweden and Finland when the countries expressed interest in joining NATO.

Considering this is a deal with obongo, why does that mound of dirt look like a grave that was filled in with care? If I were the Poles, I’d be very wary.