Your feelings only matter if you agree with the policy. 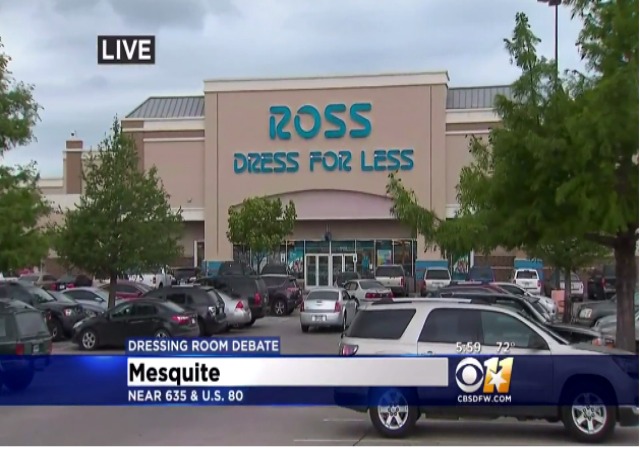 A male used the female dressing room at a Ross department store in Mesquite, TX, leaving one woman shocked, especially when the manager pushed aside her feelings and concerns.

“I was in the dressing room, when we heard a man’s voice,” said Lisa Stickles, who says she quickly told a manager.

“She went inside the dressing room, came right back out and called me to the side and told me… he was representing himself as a woman today,” Stickles said.

A customer service representative with Ross would not comment on the alleged incident but said they do not discriminate against the transgender community; adding, customers may use changing rooms that apply to their gender identity.

“What about me? Or my feelings?” said Sickles. “(The manager) told me that if I felt uncomfortable in the dressing room with him there… I’d have to wait until he’s finished.”

Those in charge at Ross apparently care more about the male’s feelings than the female who wanted to use the proper dressing room. Even more disturbing is the appearance of the man:

Sickles said she waited, and was shocked when she watched the man walk out.

She said the fact that he walked out looking like a male, not dressed as a female, bothered her more than him using the dressing. It gave her the impression he chose to use the dressing room just because he could.

The companies want to show political correctness more than anything now that people like Stickles are shoved to the side. Their feelings do not matter. They scream EQUALITY from the mountains, but exclude Stickles and other shoppers who do not have anything against the transgender community, but fear people will exploit the rules.

“She went inside the dressing room, came right back out and called me to the side and told me… he was representing himself as a woman today,” Stickles said.

It will be that way until it is resolved. A fourteen year-old boy can “identify” as a girl, and shower with…and orally rape…a girl.

This is the real war on women.

A most interesting observation!

At another level it’s war against anyone with traditional values esp Christians. All these SJWs come out of colleges and join Fortune 500 HR deparments where they influence the corporations to promote various social causes.
Sustainability, giving back, green, the list goes on and on. Oddly, many CEOs buy into it. Their companies become more and more “progressive” while profits dwindle and customer focus takes a back seat. Still, among the in-group they presumably earn a lot of attaboys.

I think this Transgender Edict and its insistence that personal perception trumps physical reality should be seen as part of a governmental insistence that it is entitled to manipulate ‘citizen’ perception. http://www.invisibleserfscollar.com/orchestrating-an-all-encompassing-conception-of-the-legitimate-domains-of-government-control-over-individuals/

Everything going on in both education and what the media covers these days has to do with creating useful beliefs of how the world as it currently exists and the institutions in place all need to shift. We miss much of the real dangers if we fail to put those broader goals into why these edicts were necessary. Obama issued a Positive School Climate Executive Order in July 2012 applying to all public schools in every state for much the same reason.

Morning news in the Los Angeles area today has been reporting that a man in his 20s is being sought for going into a high school girl’s locker room and taking off his clothes.

How do they know it’s a man? Maybe this person identifies as a teenage girl. Instead of making it sound like some pervert, they should be celebrating her courage, the h8rs.

Thankfully Loehmann’s went out of business ten years ago.

Ross needs to go out of business if this is how they treat REAL women.

In designated public locker rooms with combination shower and toilet areas, the idea of stripping and walking around in front of someone who self-declares that their penis is a meaningless appendage causes me to say that I have a problem with that fact. Not with seeing a penis, but for the audacity of the larger infringement on my right of privacy and being told I have a lesser right than the person who has a self-identification gender issue. For those who deem the need to go public with their self-designated gender status at any given point after birth, there needs to be the benefit of using a 3rd gender accommodation, one which does not infringe on my right to privacy. This group does NOT have the right to marginalize, present and subject me at will, their right to present or expose their male sexual status to me as being one of the same as me. They are not. The same can be said for females in male locker rooms. The right to privacy and to be nude in same gender facilities should have more credence than a transgender person wanting to self-identify. My identity is not up for debate while a transgender is still trying to figure it out. Until such time they remove the appendage of a penis or breasts as the case may be, you are in transition and you belong where your body parts dictates you should be; Until that time you are either male or female. For the same reasons we as a society do not all live as Nudists and out of respect why we wear clothes when in public, so should you respect those in the public locker rooms where nudity is an acceptable norm. I cannot even begin to see the merits of allowing this to happen in public school locker rooms where the majority of young teen girls and boys who will be forced to make that accommodation as a “norm” while coming to maturity. The angsts of developing hormones create issues in of itself for this age group. Adding “Political Correctness” run amok just subjects them to more chaos and confusion

I am a native Californian and lived just south of San Francisco for years. I saw the crazies in SF take over the city and turn it into a perverted city.

So I used to mock this company’s ads by saying “Cross Dress for Less.”

It’s not a joke anymore.

The activists have arrived to check things out. What on earth is wrong with these stores? Do they think that they can stay open catering to liberal nutjobs? Do they think that offending women will cause their profits to go up? I watched as stores that catered to illegals drove away all their other customers and now the rest of the stores have a way to put themselves out of business.

Do they think that they can stay open catering to liberal nutjobs?

If all their locations are in Southern California, New York, Seattle, WA, or Portland and Eugene, OR, then yes. Liberal nutjobs run those cities at the will and behest of their liberal nutjob majority constituencies.

Do they think that offending women will cause their profits to go up?

No, but their ideology and customer base calculations say that offending straight, white, and/or conservative women won’t hurt them in the long run since such women don’t tend to shop at Ross. Or Target.

FWIW, I’m appalled by this, and I’m a male. I don’t want my wife or daughter subjected to this crap. But I’m a cis-hetero (whatever the hell that means) white conservative male, so my opinion doesn’t matter.

“No, but their ideology and customer base calculations say that offending straight, white, and/or conservative women won’t hurt them in the long run since such women don’t tend to shop at Ross. Or Target.”

I don’t think that black/hispanic/asian women are any happier about this than white women.

So, physical science has been deprecated in favor of social science. I wonder how many Psycho-trists agree with the stable and normal diagnosis. The transgender spectrum disorder is not limited to crossovers.

“Your bulge must mean “you’re happy to see me.”

“My bulge must mean “I carry.” “Can I finish off that feeling for you?”

I’d like to see how it plays out when men who own small businesses suddenly “identify” as women for the purpose of qualifying for government (and some private) contracts as “disadvantaged minority or women owned” firms.

When a boy finishes his hormone treatments and has his sex change surgery, then he may use the girls shower, locker room, and toilet.

Thank goodness I’m not a slave to fashion and rarely shop at Ross (and now, never will)…and I’ve given up on Target. Things will only get tough if Wal-Mart succumbs to the liberal insanity. When all else fails, then it’s off to the internet and to hell with bricks and mortar shopping.

Stop shopping at these chains like Target & Ross, & let both the local manager & corporate HQs know why you won’t be patronizing them.

Falling sales alone aren’t enough; they have to know WHY.

Thanks for sharing…I did just go to the Target home page and contacted them to let them know why I won’t be shopping with them in the future.

If you all haven’t seen it yet.

I see a real need for Lorena Bobbit. And feed their junk to the puppy.

I’m afraid it might require physical violence to undo the damage Obama has wrought.

I think more men should do this until people start to realize that biological discrimination for restrooms, locker rooms and changing rooms is right and proper.