The airstrike could cause more friction between Pakistan and the U.S. 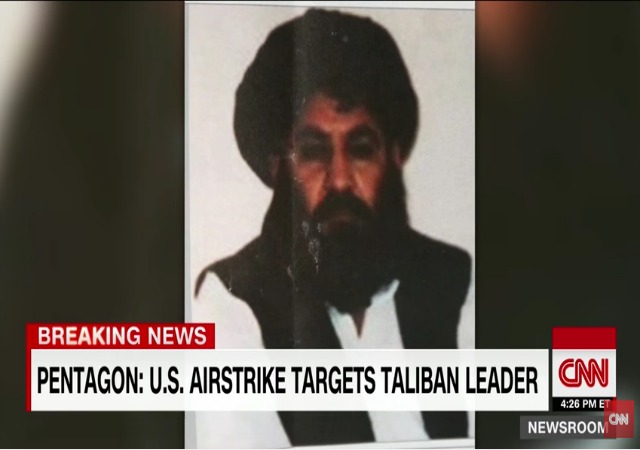 The U.S. Department of Defense said the government targeted the leader “while travelling in convoy near the town of Ahmad Wal.” From The Guardian:

The US secretary of state, John Kerry, speaking in Myanmar on Sunday, said Mansoor “posed a continuing imminent threat to US personnel in Afghanistan, Afghan civilians, Afghan security forces” and members of the US and Nato coalition.

He said the air strike on Mansoor sent “a clear message to the world that we will continue to stand with our Afghan partners”.

“Peace is what we want. Mansoor was a threat to that effort,” Kerry said. “He also was directly opposed to peace negotiations and to the reconciliation process. It is time for Afghans to stop fighting and to start building a real future together.”

The U.S. notified the Pakistan and Afghanistan governments of the airstrike, but Kerry did not “elaborate on the timing of the notifications.”

The Guardian also reported that Mullah Abdul Rauf, a senior commander of the Taliban, admitted the strike killed Mansoor. One commander spoke to NBC News, but they did not provide a name for him:

One Taliban commander told NBC News that members of the insurgent group were calling an emergency meeting of its leadership council to address reports of Mansoor’s death.

“All our members are in the state of shock and anger over what they are hearing from media,” the commander said, requesting anonymith. “Everybody in our movement is asking one question whether Mullah Mansoor has really been killed.”

U.S. airstrikes usually take place in the northern region, but this attack occurred in the southern province of Balochistan, which houses many Taliban leaders.

The Pakistan government has condemned the attack on their soil through a statement by the Foreign Office:

“On late Saturday 21st May, 2016, the United States shared information that a drone strike was carried out in Pakistan near the Pakistan-Afghanistan border area,” in which Mansour was targeted, it said.

“This information was shared with the Prime Minister and the Chief of Army Staff after the drone strike.”

The statement denounced the drone attack as a “violation of [Pakistan’s] sovereignty, an issue which has been raised with the United States in the past as well.”

Afghan officials have asked Pakistan officials to help them take action against the Taliban. The Pakistan officials believed “such a move would be counterproductive.” They even supported the leader “in his efforts to shore up control of a fast-splintering movement.” The Taliban has had internal problems for the past year when the militants discovered their leader Mullah Omar died. To make matters worse, Mansoor kept the secret for two years.

Mansoor took over, but Omar’s sons Yaqoob and Manan wanted to gain control of the Taliban.

Pakistan and the U.S. have discussed a deal for F16 fighter jets, but Congress blocked the “military aid unless Pakistan takes various steps, including tackling the Haqqani network, which enjoys sanctuary on its territory.”

Wouldn’t be a problem if Pakistan would take action against terrorists and not offer them a safe haven.

I didn’t realis mullah Omar had died. I must have missed the memo??

What’s the problem? Keep it simple. We do a little housekeeping and the Pakistanis get plausible deniability. Everybody but the dead guy wins and that’s pretty much the point of it all.