And get a life 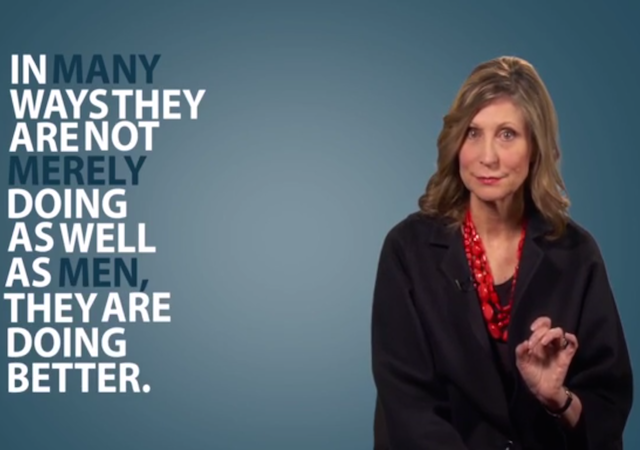 Though the term is meant to define instances of sexist men speaking condescendingly to women simply because they’re women, it’s broadly used by neo-feminists to describe any man engaging in the following behaviors: assertiveness, moderately aggressive, argumentative, expository, a man standing up for himself, correcting the record, or otherwise saying something contrary to what a woman thinks is right.

And it drives me up the damn wall.

I can honestly say I’ve never experienced the atrocity of “mansplaining” from an American man. It’s probably because I have a mind of my own and have never (even to my detriment) hesitated to use it. Am I sheltered? Lucky? Fortunate? No. I just don’t expect everyone in life to communicate to me in a way that satisfies my every emotional need and sates my insecurities. That level of self-absorbtion is just gross.

But that’s really what this about. Women who refuse to take responsibility for their own actions, but vomit their own inefficacies onto the patriarchy.

Here’s a thought — don’t like being schooled? Get your act together, be prepared, read up, study up, and know more than your competition. Have a hard time accepting correction or criticism? Then the problem is probably you, sweetheart.

Woman who toss around “mansplaining” typically do not or will not address these allegedly sexist occurrences factually, but they sure don’t like the tone of voice being used by the misogynistic man in question!

No woman is entitled to rightness because of her sex. In fact, such thinking is itself sexist. Do there exist some sexist men? Probably. Are all men sexist? Not even close. But like most progressive mantras, words are stretched, pulled, and bastardized until they have lost all meaning. Such is the case with “mansplaining.”

“Mansplaining” is used to delegitimize the opinion of men without providing any meritorious explanation why. For the love, leave men alone. They never get the benefit of the doubt these days, are scorned, spurned, and told everything they do, say, look at, listen to, wear, or think is rapey. If these women spent half as much time working on themselves as they do griping about men, imagine how much less annoying our planet would be…

Kimberlee, are you really a woman and not a retired special forces guy named Mac who got tired of snapping necks and started writing using a cute avatar?

I doubt a retired special forces guy named Mac who got tired of snapping necks would describe ABBA as “awesome”.

This video reminds me of the gods-be-damned “educators” that tried to teach black kids bad grammar and poor pronunciation.

Any young woman who gets suckered into believing this nonsense is going to find the ordinary business world an unwelcoming place, thereby reinforcing the “lesson” that she is “oppressed” by “the patriarchy.”

The simple truth is, any competent woman is perfectly capable of handling rudeness without starting WWIII. Laura Ingraham, who is shown in this video with Bill O’Reilly, regularly manages to make her points, with Bill or any other person. That is why she has the job she does.

The bit with Rand Paul is particularly choice. He is a United States Senator, being interviewed by a reporter on a topic where he has expertise, namely the US budget. The reporter has obviously asked some sort of leading, sky-is-falling kind of question. Reporters do this a lot, and it gets in the way. It is unprofessional behavior.

Yeah, in that example Rand Paul really was the subject matter expert in the conversation, and it’s his opinion that should be listened to. Not because he’s a man and she’s a woman, but because he knows it better than she does.

I could say the same about a few of the other examples in the video. The guy testifying before what I assume was a legislative committee of some kind (the lady said, “I really love the ‘mansplaining’ going on” — his response was, “The what?”). He’s testifying, so obviously they think his opinion has something of value to offer. Cutting off and disregarding his testimony as “mansplaining” after agreeing he should testify is improper and unprofessional at any level of government.

Or the “Mr. Speaker” who was (it’s implied) interrupting the lady talking. As the Speaker, it might be his prerogative to interrupt for any of hundreds of reasons: she’s going over her allotted time, she’s going off-topic, she’s stating outright falsehoods that he can readily refute (being the Speaker, and having more information), etc. But it’s not clear from the video whether he was actually interrupting her, or just legitimately refuting something she previously said. Either way, again, the meme makes its way into government, which is wholly inappropriate.

Well, Kemberlee, that was mostly good, but let me tell you what you are missing…

So sick of this BS, in the mid eighties I worked in a high end men’s store and was the only woman who sold men clothing. One of the guys called me honey and I called him doll face. If you have half a brain you can deal with this stuff, no need to be offended and the guy was not even trying to offend me, he was my friend. I made tons of money, and so did the guys. Respect goes two ways, if I ran around crying you macho pig my life would have been miserable. This crap is really getting old, so sick of it. If you want equality demand it and don’t act like an ass to achieve it, that works.

I used to work in the Transportation Engineering department of a power company. Guys from the field often came in to talk to the engineers, and I was frequently called Darlin’.

I didn’t realize how much I missed that until two weeks ago when we had severe weather which broke some power poles and put trees down across the lines, putting 400+ houses out of power for two days. I decided to take some brownies to the linemen who were working very long days to try to get the mess sorted. One of them said, “Well, thank you, Darlin’!” I’m 62! I’m still Darlin’! :o)

Women do the same thing just in different ways. For example my neighbor had to cancel a small social affair due to a family commitment. She tries to explain for several minutes over the phone why she has this commitment for her 5 year old grand daughter. As a man, I could give a damned and I spent the time trying to get to a point where I could just hang up the phone. My sister pulls the same BS when she has greater things to do. Women just will not shut up about things men find unimportant.

Women just will not shut up about things men find unimportant.

I wouldn’t have it any other way. Life would be lonely as a man if women daily didn’t enrich our lives with a different and a beautiful way of looking at life.

Still, thanks to the leftest, I have learned that my severely repressed feminine side is more woman than Hillary will ever be.

Women get cut off in conversation a lot because many of them use 1,000 words where 10 will do.

I’ve sat in too many business meetings where certain women will turn the meeting into a social conversation and never get to the point. They’ll verbalize their thoughts when they don’t know what to say…just to keep the floor. Create no avenue for reply…and worst of all, require a second meeting to complete the objective of the first meeting.

Certainly, not all women are like this and some get straight to the point and complete the tasks. However, in the former group I described, patience and silence lead to a feeling of my brain trying to claw its way out of my skull.

My 40 year career with the same company began in 1967. I found out that the high school student that covered the desk in the evening made more money than I did doing the same job. Of course, there was shift differential, but taking that away he did make more money. The older women moaned and groaned about it but I decided to approach the boss and ask why. He said he didn’t know but would find out. Long story short, the company changed that policy and froze all the salaries of the evening workers until we were caught up. Just take the bull by the horns!

Missed the point about “pre-discrediting”. If a lib/feminist/whatever hears a fact they can’t use, they try to discredit it by referring to “faux snooze” or “you heard that on Limbaugh”.
Or “mansplaining”.
This is supposed to discredit what you said, no matter its origin.