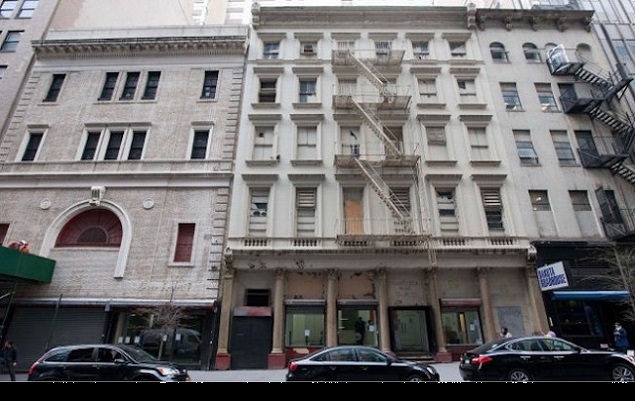 Having been denied their Ground Zero victory mosque, the owners of the site have planned to build an Islamic museum there since 2014.  This museum, apparently, will be an impressive structure containing apartments, a children’s play room, and the museum itself.

The developer who once proposed a mosque and Muslim community center near ground zero now plans a museum devoted to Islam at the same site.

Sharif El-Gamal said in a statement he wants to build a three-story museum “dedicated to exploring the faith of Islam and its arts and culture.”

He said he commissioned French architect Jean Nouvel to design a 5,000-square-foot museum. The building also would include a sanctuary for prayer services and community programs.

. . . .  The five-story building, which was once a Burlington Coat factory, now includes a Muslim prayer space that has been open for three years.

El-Gamal’s statement says daily Islamic prayer services would temporarily move while construction was under way, and then would resume at the museum when it is completed.

The developer of the failed Ground Zero Mosque has nailed down “Sharia-compliant financing” for a new, luxury condominium tower and Islamic cultural museum on the same site, he and his banking partners said Wednesday.

The $174 million dollar project features a three-story Islamic cultural museum at 51 Park Place and 48 high-end residential condos in a 43-story tower at 45 Park Place in the Financial District.

The “Sharia-compliant” financing means the deal complies with complex Islamic laws that govern lending and borrowing, including a prohibition against accepting interest or fees for loans.

Manhattan developer Sharif El-Gamal’s 2010 plan for a 15-story Islamic cultural center sparked protests from opponents who dubbed it the “Ground Zero Mosque,” although it was four blocks away.

. . . . The project now includes two multi-story penthouses on the top four floors along with a pool, gym and kids’ playroom.

The deal, finalized Tuesday, was funded by the London branch of Malayan Banking Berhad.

The project was designed by Michel Abboud of SOMA Architects, along with Ismael Leyva Architects, and will include a 2,821 square-foot public plaza, green space and a retail shop.

{SHRUG} There is nothing wrong with “sharia compliant financing.” It is nothing but a so-called zero interest loan. I offer them to my customers, although I don’t call them sharia compliant. Your car dealer sometimes offers them. You can be assured that the finance charge is buried in the cost. It’s just not called “interest,” but usually costs the customer more.

will that pool be sharia compliant as well?

This is nation conquering islamosharia style. If the muslim residents can’t fund this themselves, then it shouldn’t be built. Outside money is just funding jihad here.

Or, as I call it, The Caliphate On Hudson.

This might be the islamic version of madam Tussaud’s wax museum
. except the only thing displayed would be heads!

Fees paid for Sharia financing pay for jihad, so yes there’s something wrong with it. That’s aside from the fact that the “museum” has a “prayer space”, so in what sense is it not a mosque? Building mosques over the sites of significant enemy structures is a long-time practice of Islamic conquerors.

If Trump is serious about keeping the US safe, he should bring this up as an issue and a ‘teaching moment’ about how I-slam treats it’s victims and how they destroy enemies and build over the victims bodies.

Protest and force the sale of the property and donate as a Remembrance Park memorial similar to Pearl harbor memorial as a way of saying ‘never again’ to the towel heads.
https://www.nps.gov/valr/index.htm