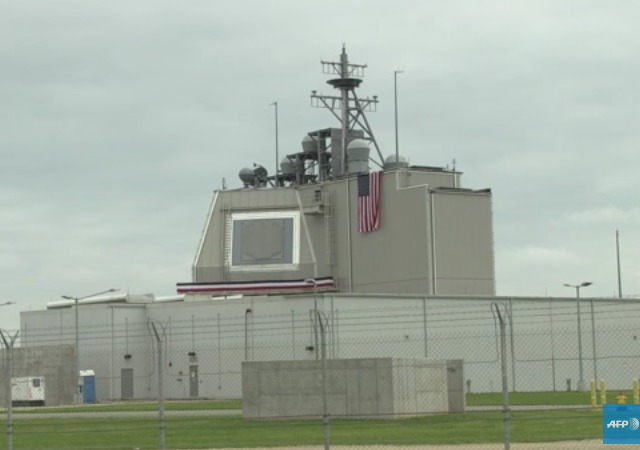 The new U.S. missile defense system in Romania has sent Russia into quite a tizzy. So much so that the Kremlin mentioned nuclear war.

Andrey Kelin, a senior official in the Russian Foreign Ministry, said the actions “by NATO can only exacerbate an already difficult situation.”

Tensions have risen between the West and Russia since the latter invaded east Ukraine and annexed Crimean in March 2014.

Dimitri Peskov, the spokesman for Russian President Vladimir Putin, described a much darker future for the West to reporters on a conference call:

“We have been saying right from when this story started that our experts are convinced that the deployment of the ABM system poses a certain threat to the Russian Federation,” the Kremlin spokesman, Dmitri S. Peskov, told reporters in a conference call.

“Measures are being taken to ensure the necessary level of security for Russia,” he said. “The president himself, let me remind you, has repeatedly asked who the system will work against.”

Foreign Ministry spokeswoman Maria Zakharova said the government views “the destructive actions of the United States and its allies in the area of missile defense as a direct threat to global and regional security.”

Yet, after the Ukraine invasion and Crimea annexation, Russian officials issued veiled threats to former Soviet republics, which prompted the countries to ask NATO for more protection.

The system is to be turned over to NATO command and will be housed at a U.S. naval support facility in Deveselu, Romania, the site of a Romanian military base. Construction will begin on an additional anti-missile platform in Poland on Friday.

The Aegis Ashore Missile Defense System unveiled Thursday is capable of firing SM-3 defensive missiles that can “defeat incoming short and medium range enemy missiles,” according to Lt. Shawn Eklund, a spokesman for the U.S. Navy.

Eklund told CNN that the facility will be manned by approximately 130 U.S. sailors. The inaugural ceremony for the new system will be attended by top U.S. and NATO military officials.

Work also assured Russia that the missile system will not shoot down any Russian ballistic missiles. American envoy to NATO Douglas Lute said the organization will use the system “to deter any aggressor.”

The Kremlin rattled it’s sabers? Quick! Time for Barry and Kerry to roll over, show their bellies and piddle on the rug again. Then they can send James Taylor over to sing Kumbaya.

Hm, the SM-3 is a very capable SAM originally, before it was turned into a missile interceptor. I wonder just what the range of this facility is to manned non-stealth aircraft in any neighboring country who might be considering threatening them.

Welcome back to the cold war.
Barry is completely unprepared for this type of brinkmanship.

“Send in the Ketchup guy!”

Funny how the left in this country uses the same argument regarding 2A rights as Russia has here. Clearly, the missile defense program and 2A rights are for “DEFENSE” against an aggressor, not to be the aggressor. Just one more example of how the “left” in this country is socialist and communist in their thinking

The system is to be turned over to NATO command
——————–
Which probably means the Russians will get the development plans within a year from some turncoat in NATO. Then they’ll devise a new system to get around it.

Hopefully the Russians can hold on until the start of the new year. When 2017 rolls around, the adults will be in charge again…