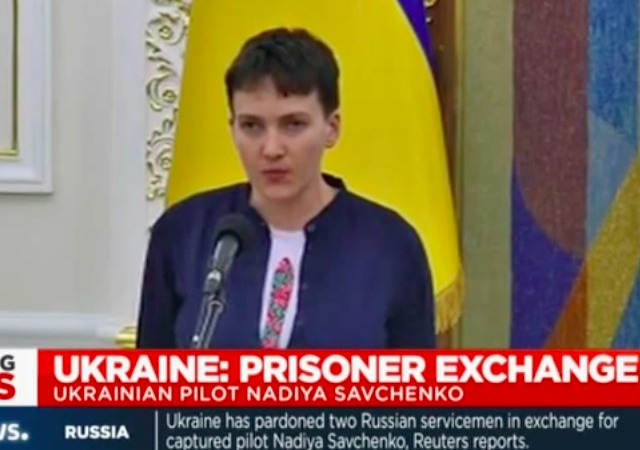 The Kremlin has officially pardoned Ukrainian pilot Nadiya Savchenko after two years of imprisonment and a farce trial in exchange for two Russia Special Forces servicemen.

The Ukrainian and Russian governments did not offer any details about the exchange. But journalists in Ukraine “noted that a Ukrainian presidential aircraft had flown to the airport of Rostov-on-Don, a southern Russian city close to the Ukrainian border.”

It came back at 3PM local time with Savchenko on board.

Savchenko spoke at a joint press conference with Poroshenko.

This is just the beginning – President talks about return of Nadiya #Savchenko to Ukraine pic.twitter.com/SR3aKWjfVe

“This is just the beginning, because we are waiting for Soloshenko, Afanasyev, Sentsov, Kolchenko to return home and many other Ukrainians, who are now held hostage in Russia as well as in the militant-held occupied territories (in eastern Ukraine). I am very pleased that now Nadiya could join this struggle,” the Ukrainian leader said.

Poroshenko gave her the Order of Hero, one of the top honors in Ukraine.

Pro-Russian soldiers in east Ukraine captured Savchenko, “the first woman to graduate from Ukraine’s Air Force University in 2009,” in June 2014 and given to Russia. The government claimed she killed two Russian state journalists covering the war in Ukraine.

The Russian courts dragged out her trial and detention, leading to a war of words between the two countries. Savchenko tried a hunger strike while the Ukrainian parliament made her a Ukrainian delegate, which gave her parliamentary immunity. But Russia did not release her.

After two years, the courts found her guilty of the deaths and sentenced to 22 years in prison. President Petro Poroshenko said Ukraine would never recognize the sentence.

I’m glad we don’t have show trials in the U.S….Well, except in Baltimore.

Sanchenko was tried in a kangaroo court and I’m glad she’s finally released. She fought hard for her release going on hunger strike several times (I think she was force fed). However, it’s a mistake to make her into a hero. She fought in the highly questionable Aidar “battalion”, financed by the oligarch Kolomoisky and filled with individuals with neoNazi connections. Not to say that she is a neoNazi, but many of her comrades are.