You too can be paid to be a “grassroots” organizer! 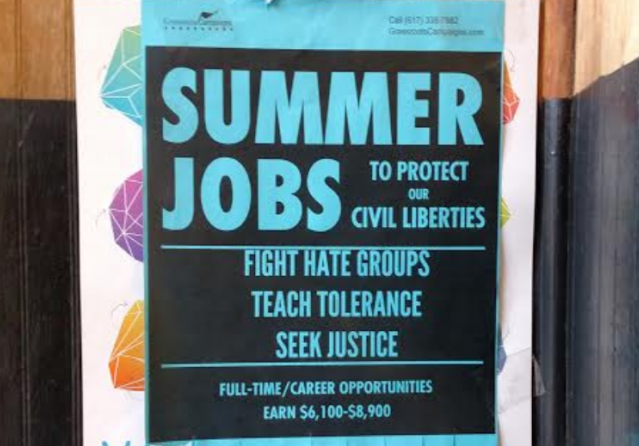 My wife and I walked into a pizza place in Boston near the hospital one of my daughters has been in (*) when my wife noticed this poster about getting paid to protest.

The poster promised pretty good summer money, that certainly would be attractive to otherwise unemployable SJW’s.

The poster was by “Grassroots Campaigns.” Sounds pretty grassrooty, doesn’t it?

The poster had the type of tear-off strips so common on posters on or near campuses: 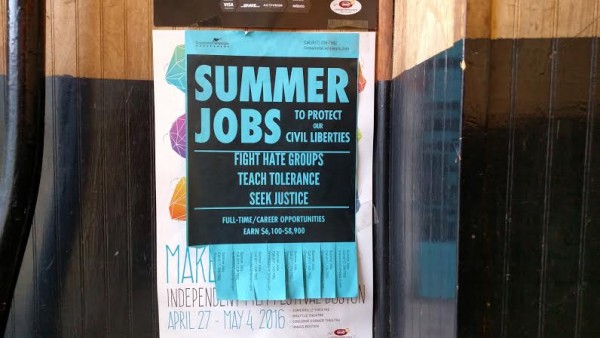 So what is Grassroots Campaigns? Well, add “Inc.” to the end of it, and you have a for-profit corporation that helps organize foot soldiers for the progressive movement: 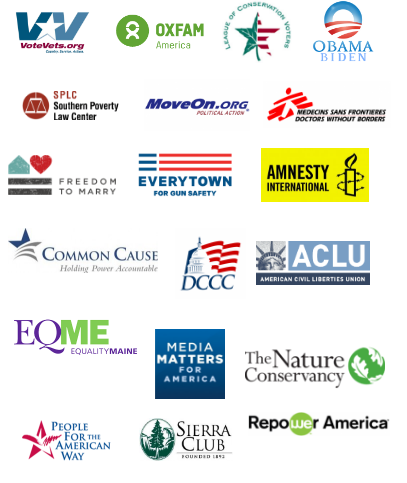 Grassroots Campaigns must haul in a ton of money because it has a large managerial staff.

The group has been the subject of some controversy, Street Canvassing for Good Causes: The Worst Job in Town?

Outside of coffee shops and bookstores, crowded Whole Foods stores and worker-run co-ops nationwide, you‘re bound to find canvassers asking for donations or signatures in support of a host of causes. They’re often young people shaking the can for high-profile nonprofits. But as we get deeper into the post-crash precarious economy, the image of canvassers as idealistic college students making a few extra bucks on summer break quickly disintegrates. People are turning to this occupation as their primary source of income, according to many active campaigners. They are hired by independently contracted companies to canvas for nonprofits. The quotas are demanding, making the work one of the most difficult low-wage jobs to hold on to…

Canvassers working for Grassroots Campaigns Inc. (GCI), a third-party contractor that does street canvassing and fundraising for progressive nonprofit organizations such as Planned Parenthood and the Southern Poverty Law Center, informed management of their unionization drive two weeks ago. The union drive began in response to what workers say were unsustainable turnover rates from firings and overly complicated pay scales.

According to workers, GCI’s strict quota system means many workers don’t last past first few days of canvassing. New hires must bring in $130 in donations during at least one of their first three days on the job; otherwise, their probationary period ends in termination. After that, workers must average $130 per day each week. Workers say the policy causes such a high turnover rate that few canvassers or supervisors have more than a few weeks’ experience. (GCI regional director Elise Stuewe tells In These Times via email that this turnover rate and the difficulty of meeting quotas are “vastly overstated … though it’s true this is a challenging job that’s not for everyone.”)

There also have been complaints about whether people donating understand to whom they are giving money when approached and how much of it benefits the charities mentioned.

Such astroturf appears to be growing for the progressive movement. At about the time I started to write this up, Katy Grimes forwarded me her article about The Artificial Outrage of Paid Protestors and Rent-A-Mobs in which she maps out the relationships and money flows of paid protest groups in California:

Every day on the news there are stories of well-organized protests. I report from the California State Capitol which almost daily is ground zero for some group protesting a grievance….

The average employed American does not have the time to protest, yet we often see the same people at different protests around the state. Where does the funding for these rent-a-mobs come from? …

Only paid professional activists and those paid to organize by their employers have time to protest. Most protests we see are not naturally occurring events, but highly orchestrated, well ­funded actions designed to push a political agenda for powerful special interest groups.

At this point, I kinda wished we’d stopped for burgers instead.

(*she should be discharged today, hopefully, but will have a significant post-surgical recovery period.)

Is this ‘Grassroots Campaigns’ bunch paying the $15 minimum wage to the people it hires to protest for ‘Fight for 15’?

And, “To protect ‘our’ civil liberties“. Who do they include in “our”?

Back when my kid attended college she never got a summer job. Seemed that the low end fast food jobs were all filled by illegals. But one year she did get a “job” like this. It didn’t pay but you solicited donations for causes and got to keep some of it. Sigh.

These groups not only talk the $15 per hour talk, they WALK it! They pay $15 per hour for an 8 hour day: $120 per day! Sine the wotk is seasonal, however, they cannot provide any benefits.

The only thing employees need to do is raise at least $130 per day. You know, so employing the person does not end up costing the organization money.

An eye opening post. Always suspected but never had this level of detail. We won’t see this exposed on CNN!

I don’t see a union bug anywhere on that poster. I’m sure that’s just an oversight, right? They wouldn’t have had them printed by the minimum wage kid at Fedex/Kinko to save a buck, right?

I assume civil liberties include RKBA. Hey, join up, you too could be president one day.

Long hot summer in the offing. Soros money, Buraq Hussein Obama third term. “To save the party” as FDR put it, when ran in 1940

Well, at least the SJW kids either in college or graduated are getting a taste of the real world with “quotas” and job performance measures. Oh, the irony that they are getting the lesson from others promoting SJW causes…..

For-profit, ‘grassroots’, rent-a-mob corporations? Very clever. The for-profit model is no doubt adopted to avoid all those restrictive 501cX regulations, and pesky IRS repression and audits that no conservative group ever faced.

Not even a SMIDGEN of corruption!

I wonder if Pajama Boy would jump at the chance of canvassing. Oh, wait, he’s running some regulatory agency.

My names curse prevents me from naming the Austin resident who has openly made a career of fomenting “civil unrest”, but I have little doubt she was in a motel room somewhere in the Greater Kansas City area calling the shots during Ferguson.

The “Black Anarchists” (nothing to do with race…in fact they’re pretty much lilly white) are mobile, and serve as shock troops for just such people.

The pro-choice religion or moral philosophy of selective (e.g. opportunistic) principles can’t help but beclown itself.

To protect destroy our civil liberties

Best wishes to your daughter. I pray her recovery will be quick and painless.

Here you go, interesting link to a story. Grassroots Campaign was keeping about 100% of funds collected, while telling donors that 100% was going to the charity if questioned. Solicitors were wearing t-shirts for the charity and were not open about working for a 3rd party fundraiser. Oh, it’s a for-profit corporation. Shocker.
http://www.sfweekly.com/sanfrancisco/gross-profit-money-given-to-clipboard-kids-rarely-makes-it-to-nonprofits/Content?oid=2182738

Getting some “waling around money” or “street money” is pretty much a democratic (both big D and little D) tradition but my understanding is that the Dems reigned it in in favor of paid organizing.