Netanyahu Turns Down French Initiative, Wants to Meet With Abbas

Netanyahu Turns Down French Initiative, Wants to Meet With Abbas

Netanyahu believes the Palestinian Authority wants to use the conference as a way to impose concessions on Israel. 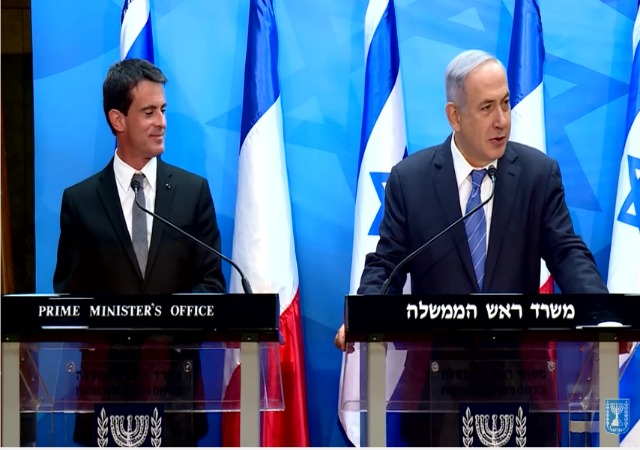 Israeli Prime Minister Benjamin Netanyahu told French Prime Minister Manuel Valls he wants to hold a one-on-one meeting with Palestinian President Mahmoud Abbas instead of a multinational conference in Paris. Netanyahu thinks Abbas will use the conference as a way to ignore direct negotiations with Israel.

France has scheduled the peace talks for the beginning of June without Israel or Palestinian Authority representatives.

“The Palestinian Authority does not see the French initiative as an inducer for negotiations, but as a way to avoid them,” he said.

Instead, Netanayhu said, he would be willing to meet Palestinian Authority President Mahmoud Abbas “in Paris or wherever,” and hold face-to-face negotiations without international mediation. “Every difficult issue will be on the table,” he said.

France plans to host another conference with Israel and Palestine in the autumn.

Valls has traveled to Israel and the Palestinian territories to talk about France’s desire to hold talks between the sides in an effort to establish a Palestinian state. But Netanyahu believes the Palestinian Authority are using the conference to “prevent direct talks with Israel.” From Times of Israel:

“Peace is not achieved in international UN-style conferences, nor through international diktats that come of meetings of countries around the world sitting to decide our fate,” Netanyahu said. “Peace is achieved through direct negotiations where the Palestinian Authority would face a historic choice: recognize a Jewish state side by side with a demilitarized Palestinian sate, or try to eliminate it.”

“But here’s the difference: I will sit alone, directly, with president Abbas in the Elysée (French presidential) palace or anywhere else that you choose. Every difficult issue will be on the table.”

Hamdallah claimed that Netanyahu “wants to buy more time.” Hamdallah wants to participate in the multinational conference instead of direct talks:

“After 22 years of negotiations we did not achieve anything from the Israelis and we do not want this time to let Netanyahu escape from the (hands of) the International community,” Hamdallah said.

While Israel has spoken frequently against Palestinian incitement, Hamdallah told the French that he was concerned by Israeli hatred.

“This Israeli government has drifted further towards extremism and racism,” the Palestinian leader said.

“Its leaders incite and spew hatred against our people while expropriating our land and natural resources, and expanding illegal settlements,” he said as he described for Valls the harm caused to his people by Israel’s continued presence in the West Bank, including continued settlement construction.

According to The Jerusalem Post, the Palestinian agency Ma’an reported that Netanyahu sent a “secret Israeli delegation” to Cairo to arrange a meeting with President Abdel Fattah al-Sisi. The delegation allegedly wants Sisi to participate in talks with Abbas and Netanyahu.

France began talking about the initiative in January. It warned Israel that it will recognize a Palestinian state if the talks ended in a stalemate. Israeli officials said the threat gave Abbas more ammunition to not negotiate with them.

Since then, Israeli officials have said they want to meet one-on-one with Abbas instead of a huge conference.  Netanyahu voiced his decision against the conference last month.

The United States tried to hold peace talks between Israel and Palestine, but the talks collapsed in April 2014.

Netanyahu’s instincts are sound; he is no fool. Fatah is utterly corrupt and beyond redemption, and this was true even before it got into bed with Hamas. How much foreign aid has been embezzled by Fatah-Hamas leadership? How much has been wasted, spent on weapons and building terror tunnels, instead of on infrastructure?

Abbas knows that, in a multi-party setting, he can perpetually play the “victim” card, posturing and continuing to promote the ridiculous, fallacious narrative of the Palestinians cast as the poor, oppressed black South Africans, with the Israelis as the evil “white” regime, all while deflecting much-deserved scrutiny and criticism for his leadership failures and continued, intentional efforts to undermine peace. This is a charade, so, why should Netanyahu play along? He’d be an idiot to go along with this farce.

Bibi is too smart to let a bunch of Euro-wienies gang up on Israel in any kind of negotiation. Which is exactly what they intend to do.

“Mediators” are only that if they are really neutral, and they are past worthless if they have a bias.

When you have any good faith going in a dispute like this, you can get where you need to go. If you don’t, you can’t.

Netanyahu’s instincts are far from sound. Put him in a room with Abbas and he will give away whatever he can. He talks a good game, but he has a long history that we can judge him on, and it’s one long litany of concession after concession. The first thing he did when he first came into office was give away Hevron, and nothing since then has changed.

And yet, after all the concessions, the Palis are not satisfied:

“After 22 years of negotiations we did not achieve anything from the Israelis and we do not want this time to let Netanyahu escape from the (hands of) the International community,” Hamdallah said.

Because their goal is genocide, not a state of their own. They do not want peace, they want mass murder.

Indeed. Once one acknowledges the obvious — to wit, that the ideology of “Submission” is (and, has been, for 1,400 years), by its own explicit scripture, a supremacist ideology of aggression that commands its followers to kill or subjugate non-Muslims, as a mandatory religious duty — the entire mindset and posture of Fatah/Hamas becomes starkly clear. The very notion of Israel — an economically successful, pluralistic, militarily strong, culturally vibrant democracy — cannot be countenanced. Israel is an affront to notions of Islamic superiority and supremacy and therefore must be destroyed. Israel proves (not as the exclusive example, of course) how economically, theologically, culturally, politically and morally bankrupt and barren the ideology of “Submission” is, wreaking misery, suffering and poverty wherever it is the dominant power.

This is the underlying context that historically, theologically and intellectually dishonest and ignorant Leftists — including Obozo and most of the European leadership — fail to comprehend.

Netanyahu comprehends it, all right. He just doesn’t care. He still thinks he can achieve a peace agreement and go down in history, and what happens later will not be his problem.

Of course they’re not satisfied. A dog is never satisfied, no matter how much you feed it. That doesn’t change the fact that Netanyahu is not the champion you delusional people imagine him to be. How can you possibly think he is strong or principled, when he has a 20+-year history of the opposite?

Ah, I see the problem. You’re confusing Netanyahu with the execrable bho.

No, I am not confusing him with anybody. I know exactly what I am talking about, and none of you do. Binyamin Netanyahu is a spineless hypocrite, who will give away his own father’s grave if that’s what he thinks it will take for him to stay in office one minute longer.

All the people who downvoted my comments know nothing at all about the subject. The ignorant rule.