However, many may not vote at all given these two choices

As we at LI, like everyone else on both sides of the aisle, absorb the likelihood of a Donald Trump, Hillary Clinton face-off in November, the Military Times conducted its own survey of active-duty military personnel and learned that those in the military, if faced with the choice between Trump and Hillary, choose Trump by a wide margin.

Disturbing to the Trump camp, however, is the fact that “more than one in five” of those military members surveyed may not cast a vote for president at all in November if Trump and Hillary are the only two choices and that Trump’s troubles with women voters extends to females in the military.

In a new survey of American military personnel, Donald Trump emerged as active-duty service members’ preference to become the next U.S. president, topping Hillary Clinton by more than a 2-to-1 margin. However, in the latest Military Times election survey, more than one in five troops said they’d rather not vote in November if they have to choose between just those two candidates.

Here’s the Military Times graphic (via the above link): 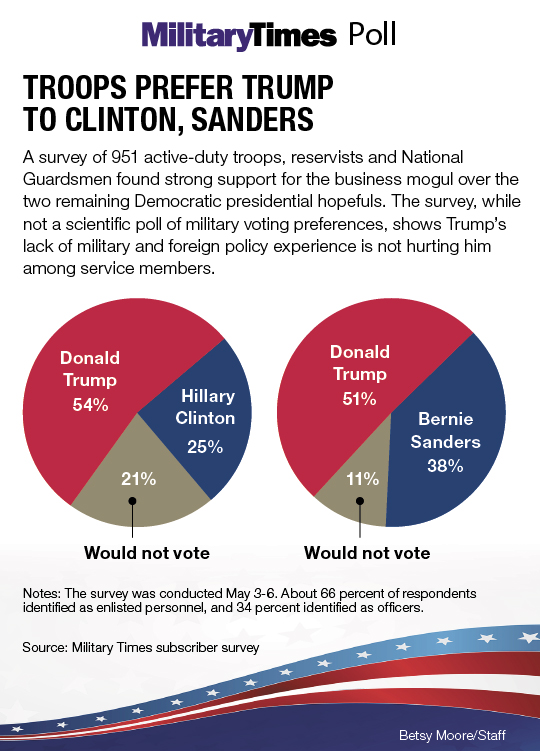 Trump fared better among military members against Bernie Sanders in a head-to-head matchup, as well.

Independent Vermont Sen. Bernie Sanders fared slightly better than Clinton in a similar head-to-head matchup with Trump, but still trailed the reality TV star and business mogul by a 51 percent to 38 percent margin. About one in 10 military members said they would not vote at all given those two candidates.

Interestingly, the active-duty military respondents were overwhelming Republican (over 50%) and only nominally Democrats (18%).

In the latest survey, nearly half of respondents identified as Republicans, and only 18 percent as Democrats. That partisan divide accounted for much of Trump’s support.

One complaint highlighted by the survey was, among other concerns, the two candidates’ lack of understanding of the military.

In anecdotal comments connected to the survey, several survey respondents called the options for president frustrating and disappointing:

Dozens also noted plans to vote for a third-party candidate, citing their dissatisfaction with the major party choices.

“The candidates left just don’t understand the military,” said Army Capt. Christian Pardo, who said he would not vote for any of the major party candidates left. “The military perspective on some of their policies are just so far out there.”

Pardo said he wishes a candidate with military experience was still left in the race. He’ll be considering third-party candidates in the fall, “but if none appeal to me, I may just stay home.”

The breakdown of the various military branches’ responses is interesting (to me, anyway).  Again from the Military Times: 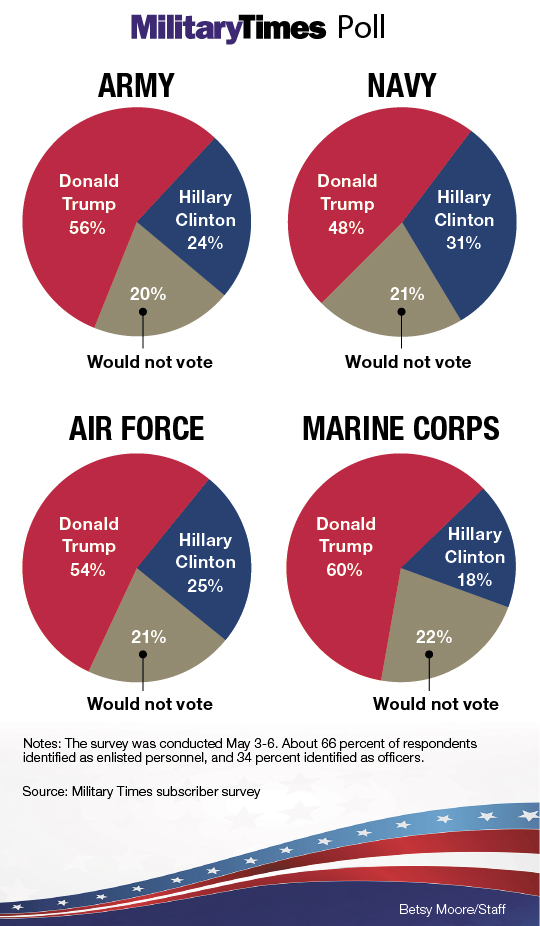 Of the 951 respondents to the email survey, “nearly half of respondents identified as Republicans, and only 18 percent as Democrats. That partisan divide accounted for much of Trump’s support.”

The methodology of this survey is a bit different than that of traditional polling outlets, so you may be interested in reading about that here.

[Featured image via the Sun Sentinel]

How many vote? Or, how many military votes are counted? I remember the Democrat vote counting methods in the past two elections where the ballots of the dead and felons and clones are counted but not the military.

A big part of Truing the Vote should be ensuring that those serving in the Military can vote and those votes are counted.

Disenfranchising the military is Voter Fraud.

I submitted an absentee ballot from Iraq in 2008, however that vote never made it onto my voting record. That’s the only one that hasn’t shown up. I’ve talked to many other Veterans that have had the same experience while deployed.

Collectivists, of one stripe or another, which is not really a “choice” at all.

Yes it is a choice. Voters in record numbers went to the polling places and voted during the primaries. That you don’t like their choice doesn’t negate the fact that the primary voters in fact chose who they wanted to represent them in the general election. You are exhibiting the same smug condensation that the liberals and other DC elites exhibit – to whit, you think you are smarter than everyone else and we should lamb-like trip along after you.

“That you don’t like their choice doesn’t negate the fact that the primary voters in fact chose who they wanted to represent them in the general election.”

You’re confused, cousin. I never suggested otherwise. Not any more than I suggested that Obama voters should be “negated” for their very bad choice(s).

Noting that we’ve been handed a really AMAZINGLY bad “choice” by this primary process is not “elitist”. It’s just an a observation of reality, as reflected by the poll of the military AND by the number of people like me who won’t vote for ANY Collctivist sack of shit. You’re free to make your own choice. Don’t try to call me names because I’ve made mine, and stated it.

The Marines are smarter than you Army guys 🙂

LOL, we know that the orange toad will soon be crowing about how the military loves him and prefers him over hitliary 3 to 1 or whatever it is and that they all can’t wait to vote for him.

What difference does it really make, they refuse to count the military votes. They would rather count the votes of the dead people.

Getting it down to 20 percent would be a miracle.

Interesting observation – the more likely they are to be sent into combat as a ground-pounder- the more they support Trump.

Here is the proper context for military vote:

The pattern shows they know their votes have been for naught?

Sort of like the rest of the general population is finding that their votes don’t really count either. Just kuboki theater to the so-called elites.

Hey Fuzzy: I hate being a grammar Nazi, but you spelled YUGE wrong. 😀

A vote along gender gap in the military is pretty laughable, considering that males STILL make up 85-95% of the military (depending on branch).

And the numbers are going to drastically increase for Trump once he starts going toe to toe and hammering Clinton on continuing Obama’s foreign policy.

On the last military survey Obama had mid-teens approval rating. The military as a whole utterly LOATHES him.

Ducking Commander Trump or 3 AM ignore-the-Call Clinton – what difference, at this point, does it make?

The military probably wouldn’t hold Trump’s vulgarity and paranoid conspiracy theories against him, were he not a draft dodger from his youth. To Trump’s benefit, the prospects in many areas during a Clinton presidency would be very grim. Trump may have stumbled upon the only opposition candidate and first runner up that he could actually beat. A criminal and a communist.

41 was the last guy who wasn’t a draft dodger.

The bigger picture is whether or not their vote will count. It seems that whenever there is a close election, ballots from our troops overseas seem to get lost on a routine basis and yet few care. Since the soldiers routinely vote for the Republican candidate in far greater numbers than they do for Democrat candidates, a cynic might see these lost votes as a liberal strategy for a Democrat to win the election. So, how many of you out there are cynics?

Why the constant harping that Trump has a “woman problem” but no mention that Clinton has a “man problem”?

Doesn’t fit the TDS narrative. Trump is doing about as well with women at this point as all republican nominee’s.

I have voted in every November election since I was 18, nearly all of them absentee with one from the sandbox. I may have missed a few primaries in non-Presidential years. I’ll certainly be voting this November as well, but I’ll probably write-in or do some more research on the Libertarian who wins their party. However, I will say with all honesty, almost anybody would make a better CINC than Hillary.

Not to worry.
All those Military that are out-of-country will receive their ballots far too late to get them filled out and returned by the official deadline.
Heck, we took care of that in the last election…