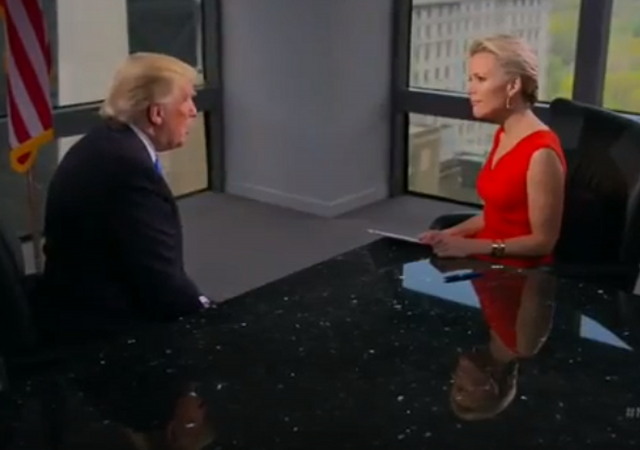 After watching the segment below, all I can say is that if you want to see an interview that’s heavy on policy, look elsewhere. This was more Barbara Walters than FOX News Sunday. That’s not to say it isn’t interesting or worth watching, because it is.

“Megyn Kelly Presents” airs on the FOX Broadcast Network and not the FOX News Channel and this makes sense for reasons which are apparent. Kelly is obviously trying to expand her reach and kicking off this effort by interviewing Trump is brilliant from a ratings perspective.

The first six minutes of the segment recalls the rocky relationship between Kelly and Trump starting with the first GOP debate on FOX News in August of last year using clips from FNC and other news outlets.

Once the actual interview begins, it focuses more on the personal aspects of Trump’s life such as his older brother who died of alcoholism. Kelly asks Trump when it became apparent to him that he could win, his Twitter habits, the issue of bullying and his political strategy.

Next up is the contentious turn their professional relationship took after the infamous debate. The two manage to smooth things over and seem to agree to part friends. Trump defended his actions by suggesting he acted in his own defense.

The candidate addressed a range of topics in his sit-down with Kelly, from his tone to the lead-off presidential debates to his past clashes with the Fox News host.

Trump conceded that, in looking back, he “absolutely” has regrets, without going into detail. But he said if he hadn’t conducted himself in this way, he wouldn’t have come out on top.

“If I were soft, if I were presidential … in a way it’s a bad word, because there’s nothing wrong with being presidential, but if I had not fought back in the way I fought back, I don’t think I would have been successful,” he told Kelly.

The interview itself is about 15 minutes long and you can watch it below. If you know the backstory of Trump’s feud with Kelly, skip to the six minute mark for the beginning of the actual discussion:

Additional segments of the interview will be aired on the Kelly File on Wednesday night.

While scanning news reports on the interview, I found myself in agreement with CNN’s Brian Stelter. This was a win-win:

Trump is making peace with a media power player he has relentlessly criticized since last summer, and Kelly is getting a guaranteed ratings boost from the presumptive GOP nominee.

The interview is not a debate-style inquisition — it is a more personal look at Trump and his temperament. Kelly has been promoting it for more than a week, but Fox still says there are some surprises in store during the actual broadcast.

In April, Megyn Kelly indicated that she’s not sure what she’ll do at the conclusion of her current contract at FOX News. We might be witnessing the launch of the next phase in her career.

Fluffy Featherweight Trump has been leveraged to the extreme by the media. Now they are both wasting our time.

And Megyn Kelly tells Lt. Gov. Dan Patrick to get over transgender bathrooms? Who is she? Kelly’s just a remote member of the View. Her opinions mean absolutely nothing.

Megyn, the new Barbara Walters, has nothing I want to see or to listen to. Thank God I didn’t watch this crap. I stopped watching FNC & FBN months ago.

You should protest by tuning out. But more people have been tuning into both of those networks since the election process started. It is a business, after all, and that is what drives their production style.

Did Kelly tell him to get over it??? The interview I saw she was challenging him as to why do it and why now.

I was reinforcing your comment. Perhaps I should have typed,”You SHOULD protest by tuning out like you have….”

I watched it in real time. I got the impression it was a detente meeting and would expect to now see him interviewed on her regular TV show, where she will return to all of the policy stuff. If she had just asked about policy, it would have been like nearly all the other interviews he does almost daily across the board of networks.

It didn’t come off as scripted, but it wasn’t far off. Clearly Trump wanted to use it as a way to appear softer. He seemed to be trying to exhibit a less domineering side. No doubt he wanted this to score points with some of the female electorate he struggles to get. Not sure it worked, but we will see, I guess.

Opinions from TV Land People lead us astray, what matters to them are ratings rather than integrity.

Media establishes an illusion that they are all wise and all knowing and that I should care what they say, but they are just people whose only concern is popularity I have turned away from their unreal reality; to watch is a waste of time.

Watch Trump and Kelly make up show? Not worth my time. I have no use for either of them.

I can’t change the channel or fast forward fast enough when I see or hear the hump on TV.

The above video appears to be a commercial for two brands of canned air: Trump and Megyn.

The fact that Trump, Hillary and Bernie are the candidates for U.S. president tells me that our country is going down.

We’ve been Merkel-ized from within by the immigration of “fundamental transformation” into our thinking, a cultural transformation that has abandoned reason, revelation, values and millennia of tradition so as to obtain power over another in our so-called “democratic” country. The long march of Cultural Marxism is taking its toll, as shown by the present three candidates who offer nothing but placation for those who will vote for them.

Obama used “fundamental transformation” to promote the deconstruction of America. One of these three candidates will continue the process. The three are not culturally benign by any stretch of the imagination. They each, in fact, epitomize cultural rot.

The interview was never promoted as hard hitting. It was promoted as the two titans clashing. If I were #neverTrump and agreed with all of the Murdoch/Ailes/FNC pro-Trump conspiracies, I might think this was a deliberate effort to polish Trump’s image in prime-time on broadcast television (not cable). Similar to the way many Dems have been treated forever, not just by Barbara Walters. At least Megyn didn’t ask what tree Trump feels most like.

I am still a skeptic and not sold on Trump 100%. But this interview informed me and my wife in one key way. Trump is a PR master and knows exactly how to manage is television image. In that respect this was a big interview where he didn’t domineer and exhibit his traditional type A behavior. So he does have it in him to play that game. Obama is the image-creating master. But even GWB played that game pretty well. The difference for Bush is that most of his public image building efforts were sincere. It’s hard to tell with Trump.

I thought there were some interesting nuggets in this interview. In particular when he named “All Quiet On The Western Front” as his favorite book. Maybe he will put America first and break ftom the bogus nation building and the endless wars that have been the Hallmark of the last two Administrations.

With fracking we can stop the endless wars to protect the House of Saud and let them stew in their own juices.

I won’t be surprised if Trump treats the military to a greater degree like a business, but in mostly the right way. I don’t think Rumsfeld or Bush were every concerned with the costs versus gains, and immediately after 9/11 I was right behind them. Obama only looks at how to better spend the money domestically in the effort to “transform” the culture. My gut says Trump understands exactly how important military effectiveness is thanks to his Type A personality and penchant for aggressive negotiations. He knows he needs a military that can clearly back up any position he needs to take in that sense.

What is not clear is how he might view any overseas effort once engaged from a cost/benefit perspective. Hillary might even be more “do it no matter what the cost” than Trump. But I’d take Trump 100 times on defense overall rather than her if only to stop the PC virus from spreading further.

casualobserver, you should go to Disneyworld where dreams come true.

What is your point? Do disagree with my comparison to Hillary, for example?

You’re completely investigated in “war for oil” lie of the Code Pinkos. There’s no distinction between you and OccupyWhatever.

What, for instance, does the Afghan war have to do the the House Of Saud? Or oil.

I just think he values the lives of our soldiers much more than Hillary. Or Bill Kristol and the rest of the #NeverTrump crowd. They would throw lives away in pursuit of their policy goals regardless of whether or not it is truly in America best interest.

As Trump says bomb the crap out of ISIS regardless of collateral damage and then leave them to fight like crabs in a bucket.

In our home we turned Fox off months ago, and we won’t view any clips or read any articles about this commercial. (Of course, head-in-sand.)

It was correctly described above as two containers of canned air. She has an ego and he has one. She needed to be assuaged and he did. They did each other. It is impossible to over-estimate the unimportance of that to me.

She acted like a woman who wants to be in a relationship with Trump (“you have my number,”).

For Trump, it was probably good PR for women to see another woman swooning over him, but I honestly don’t care for Kelly and there was little substantive content. The closest thing to substantive content was when Kelly promoted her girlfriend Sheryl Sandberg’s anti bullying campaign (and even that is really just PR cover for letting liberal SJWs police Facebook).

The other interviews (wait I though this was just Trump) were with stale subjects covered elsewhere, including OJs lawyer. And the final Trump tease was Megyn goading Trump into saying he watched her Kelly File, and then Megyn advertising her book.

I would have to have been paid a lot of money to watch this.

A: How many #NeverTrumps does it take to change a lightbulb?

Q: None. They prefer to sit in the dark, wallowing in their grief, now that the see Movement Conservatism is just another failed, outmoded, 20th century ideology.

Kelly is irrelevant. Maybe the likes of boehner get all hot over her, but she lost it when she became a useful idiot of Fox.