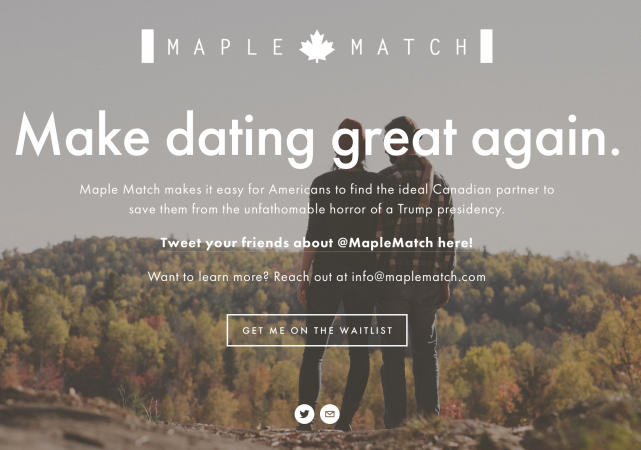 If you’re a single American looking for love who vowed to leave the U S of A should Donald Trump take the White House, today is your lucky day.

Maple Match promises to help Americans find Canadian love. “Maple Match makes it easy for Americans to find the ideal Canadian partner to save them from the unfathomable horror of a Trump presidency,” they claim.

Calum Marsh reported for The Guardian:

The service’s founder is Joe Goldman, a 25-year-old education research and budding entrepreneur based in Austin, Texas. A self-described man of “liberal persuasions” living in a red state, Goldman says he has a natural affinity for Canada and its progressive leftwing image. Maple Match is a manifestation of his dual passions: connecting different people and his neighbors to the north. “When this election came about and I started seeing Donald Trump and the rise of his candidacy I started getting concerned, just like anybody else,” he said. “I thought it might be interesting to try something like this out.”

At first his ambitions were modest: “Last week I had a hundred page views and I thought that was a great – I made a hundred people smile.” But then virality transformed Maple Match into an international craze. Last Friday, Maple Match was getting 200 sign-up requests an hour. Today nearly 5,000 singles have signed up for Maple Match – and the app hasn’t even launched.

Goldman has attracted Americans and Canadians alike – the former hoping to get out of the US and the latter glad to harbor them. Maple Match has been fielding all sorts of desperate pleas. “Please help me,” a 22-year-old American writes on his Maple Match application. “I found out my parents are voting for Trump and it literally broke my heart.” “I want to meet an American woman who disapproves of Trump,” writes one Canadian. “She must be willing to become a hockey fan and eat maple syrup and Beaver Tails in my igloo.”

Might sound good in theory, but then you’d have to eat Canadian bacon for the rest of your life, and we all know it’s inferior to regular ol’ bacon.

This is another option worth considering:

So Heidi can find another Canadian if she decides to leave Ted.

Where are the election results tonight?
Cruz says he will get back in if he wins Nebraska, and apparently Bernie has schlonged Hillary in WV.

Pining for the good old days when you had a Republican you could attack? Lost when the only enemy left is someone your boss is pretty tight with? Brother, life is hard. It’s made a lot harder when you’re determined to empty the entire magazine into your foot.

Here’s a personally customized first rule of holes for you. When you find yourself in a hole, stop shooting.

Canadian bacon? They haven’t regulated that into oblivion yet? Any good Progressive would know that … some people … consider that stuff anathema.

I have to admit….

The “why not Mexico” question really needs to be asked. What’s not to like? You’ve got Cozumel, Mazatlan, the Baja? Seriously, when people post their vacation pics, I only know a few hearty souls who share their hikes through the great northern forests….. everybody else is posting those resort pics!

Better yet….. “Why not Cuba?”…. what’s not to love? socialism, retro cars and political prisoners!

Time to hit back on some of these celebs!

This is by far the most awesome thing that I have seen this week. It’s the epitome of the theory that underlies one of my favorite books: It’s Not The Big That Eat The Small, It’s the Fast That Eat The Slow.

This guy found a niche market, will have oodles of free publicity and (if he’s smart) will launch in about two to three weeks and sell to one of the big dating sites the day after Trump becomes the nominee for millions and millions of dollars.

A posting worthy of “This hour has 22 minutes.” Well done!

Most Canadian women I dealt with were smart, pretty and had great personalities. Get rid of pretty boy Justin and we’ll talk.

Oh, and Canadian Bacon is not Canadian. Anyone who doubts will be made to watch Shatner videos on the subject. You’ve been warned.

They do require that you learn to speak Canadian, which means learning to say oot and aboot, eh?

Is Canadian love like muskrat love: i.e. hot and hairy?

/married to a Canadian