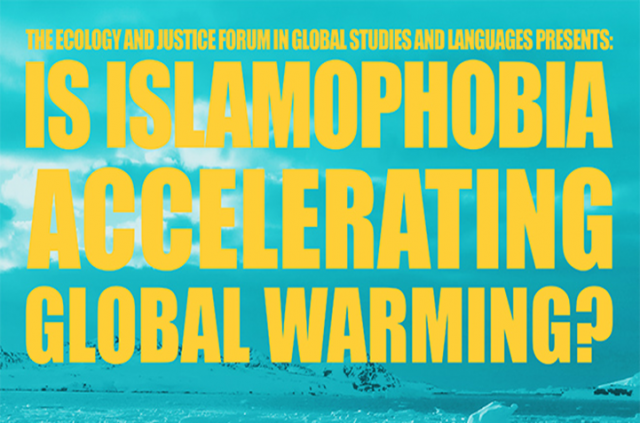 I must admit, I have seen a lot of crack-pot theories about Climate Change/Global Warming in the past two decades.

However, Ghassan Hage (a Lebanese-Australian academic serving as Future Generation Professor of Anthropology and Social Theory at the University of Melbourne in Australia) has hit the motherlode of social justice nuttiness.

This talk examines the relation between Islamophobia as the dominant form of racism today and the ecological crisis. It looks at the three common ways in which the two phenomena are seen to be linked: as an entanglement of two crises, metaphorically related with one being a source of imagery for the other and both originating in colonial forms of capitalist accumulation. The talk proposes a fourth way of linking the two: an argument that they are both emanating from a similar mode of being, or enmeshment, in the world, what is referred to as ‘generalised domestication.’

As an environmental health and safety professional, I assess that the only way Islamophobia contributed to global warming is from the hot air Hage emitted while presenting this lecture, which was given May 9.

He is currently working on a similarly titled book. To give you an example of the quality of Hage’s scholarship, here is his previous tome: White Nation: Fantasies of White Supremacy in a Multicultural Society 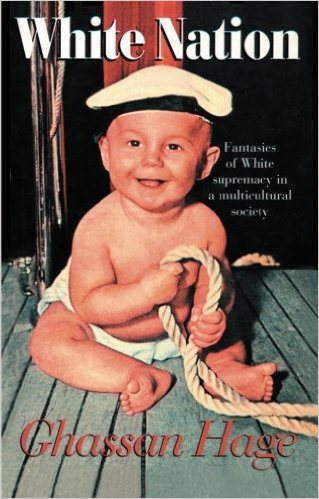 White Nation appears to be about as fact-based as his new global warming theory, too.

Anthropologist and social critic Ghassan Hage explores one of the most complex and troubling of modern phenomena: the desire for a white nation. In this book, he asks whether that desire is indeed limited to racists. Drawing upon the Australian experience, Hage draws conclusions that might also be applicable in France, the United States and Great Britain, each being examples of multicultural environment under the control of white culture.

Hage argues that governments have promised white citizens that they would lose nothing under multiculturalism. However, migrant settlement has changed neighbourhoods, challenged white control, created new demands for non-whites, and led to white backlash. This book suggests that white racists and white mulitculturalists may share more assumptions than either group suspects.

Interestingly, “Anthropologist” Hage started out his career in academia with a Political Science degree. The following video is an interview with the Australian professor, which should give Legal Insurrection readers a good feel for quality of the “Islamophobia” lecture.

If nothing else, the “Islamophobia” chat and White Nation should confirm that neither Political Science or Social Anthropology are real sciences.

Any guesses as to how this “multiculturalism” expert feels about the BDS movement?

One parting thought I offer the administrators at MIT: In about three years, my son will begin applying to college. He math scores are stratospheric, and he has an interest in engineering and physics careers. This summer, we are planning to take a tour of the MIT campus while we are in Boston.

If MIT still can’t distinguish between true science and social justice inanity by then, we will have him apply to other institutions that can.

His title alone…..SMH. I have no words.

Some truth in it. I do get hot under the collar when I see Islamic violence against Israel.

At what point will people understand that INSANITY is the new normal ?

At the ‘Tute they generally don’t ignore loonies until after they’ve heard them. Then, having a firm basis for a diagnosis, they can move on to the next loony. All very scientific. It’s rare for someone to be shut up there before he’s had a fair chance to make a putz of himself. For a school, that’s a good SOP.

I was there just last week, and everything looks normal; no roped-off areas with signs saying “Please don’t feed the loonies,” no robots cruising the Endless Corridor waving their arms and saying “Danger! Danger!”, nothing unusual at all.

The video above, NPR and TV commercials: You know when the acoustic guitars start playing that sentimentalism is the methodology used to generate belief in all kinds of nonsense.

But left unanswered is how Islamophobia fits into the feminist postcolonial sciencestudies and feminist political ecology.

With the Internet, why do we need migration in order to have multiculturalism.
We can learn and understand the cultures of other and allow it to remain pure and avoid inadvertent cultural appropriation of other cultures by leaving them in the original enclaves where they are the majority.

Obviously a victim of chronic constipation. His crap has backed up and is filling his otherwise empty skull.

Yep. You can start with “…Islamophobia as the dominant form of racism today…” Except Islam is not a race.

And then proceed to the fact that a “phobia” is an irrational fear. Fearing (and despising) religious fanatics who are running around the globe chopping off heads and blowing up public places seems quite the opposite of irrational.

And at that point any reasonable person would conclude that this “professor” is in actuality a fucking moron.

Islamophobia isn’t increasing Global Warming, but the excess heat from all the crap the “religion of peace” keeps blowing up might be.