Johnson and Weld are off to a rough start. 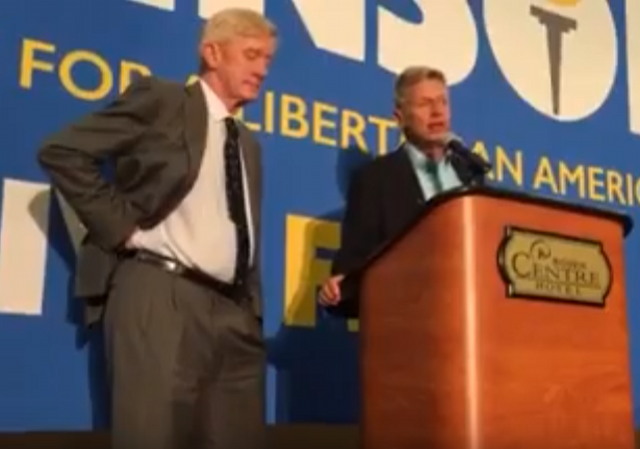 Amid the cries of #NeverTrump on the right, some conservatives are saying they’ll vote Libertarian in 2016. Even conservative pundit Mary Matalin has endorsed Libertarian candidate Austin Petersen.

The favorite to win the nomination however, is former New Mexico Governor Gary Johnson who made big news last week by selecting former Massachusetts Governor William Weld as his running mate.

Having two successful Republican governors on the Libertarian ticket raised expectations in political media circles and the duo was immediately labeled a Libertarian dream ticket, yet a funny thing happened on the way to the nomination.

Members of the Libertarian Party, who gathered in Orlando this weekend to make their nomination official, aren’t impressed with Weld, who many consider Republican-lite. Weld didn’t help his cause, either.

Libertarian ‘dream ticket’ in peril as Weld bombs in Orlando

It was supposed to be a stroke of genius: Gary Johnson, the 2012 Libertarian nominee for president and the party’s leading contender in 2016, announced that William Weld, the two-term former Republican governor of Massachusetts, would serve as his running mate.

The idea was clear and appealing. The pair would comprise a powerful two-governor ticket just as the leading Democratic and Republican contenders, Hillary Clinton and Donald Trump, rate as historically unpopular. The hope was they could emerge as a true third-party alternative.

But here in the corridors of the Rosen Centre Hotel and Resort at the Libertarian National Convention in Orlando, it could all fall apart as anti-authoritarian Libertarian Party activists, loath to be defined as “Republican-lite,” are increasingly and loudly critical of Weld, who joined their party only weeks ago…

While Johnson and Weld are trying to run as a ticket — they are handing out joint buttons and paraphernalia — the Libertarian Party convention actually picks their presidential and vice-presidential nominees separately. Delegates could select Johnson and then reject Weld.

And Weld did little to help himself at a Friday night vice-presidential debate in which he got a chilly reception from the hardcore audience of Libertarian true-believers. Asked who did more damage to America — President Obama or President George W. Bush — Weld gave a classic politician answer. “I’d rate it a tie,” he said. He used the word “miasma” in his closing statement.

At one point, Weld said he would stay in the United Nations — an idea anathema to many in the crowd — and said that when people think of Libertarians they often think of “unattractive people” in their neighborhoods.

Weld advocated cutting taxes. One of his opponents yelled, “Taxation is theft!”

Johnson also had a rough moment with the crowd. After suggesting Weld was the original Libertarian, he was booed. Reason reports:

Last night, on the eve of what may well be a historic Libertarian Party National Convention, America’s leading third party held a debate among the very many people running for its highly coveted presidential slot. Former New Mexico governor and 2012 L.P. nominee Gary Johnson, who is considered to be the front-runner in the race, took a sharp jab during the debate from upstart contender Austin Petersen over the controversial-to-libertarians, praised-by-media-outsiders selection of former Massachusetts governor William Weld as his suggested running-mate. (Veeps are elected separately at L.P. conventions.)

Petersen, who has been making hay with his contention that “It’s time for us to stop nominating failed Republicans, and start nominating successful Libertarians,” drew sustained applause when he challenged Johnson over Weld’s Libertarian bonafides: “In 2012, he didn’t endorse Ron Paul, he didn’t endorse you, he endorsed Mitt Romney. In 2016, he endorsed John Kasich. Why didn’t your VP pick endorse you?”

Johnson’s semi-rambling answer—he started off saying that tabbing Weld was “beyond my wildest dreams,” and ended up encouraging skeptics to ask his running-mate that same question during the upcoming vice-presidential debate—was punctuated by the contention that Weld was “the original libertarian.” That did not go over well:

Here’s a video of the moment described above:

Reports of the Libertarian Party’s ascendancy in 2016 may have been greatly exaggerated.

This will be the first election, with the exception of Reagan’s 2nd term, that I will not be voting Libertarian.

voted Gary Johnson the last two elections, as I could not stomach adding support to McCain or Romney, and knowing that all Utah’s electoral votes would go against the O, I was able to vote against the two parties. But this election, I may just vote for Trump. May. I am thus far unsure, but leaning towards him.
I was a Walker fan, then Cruz. Always Never-Bush -Kasich -Rubio. Rather have Bernie than Hillary, because at least he is honest in his beliefs, and one can work with a principled opponent, but would rather NOT have him either.
Trump, I have been on the fence about since last July. He could be amazing, he could be a disaster. The big thing I think Trump has going for him is that he is a businessman not a politician, and that could make a difference in a lot of things.

Is Soros funding Weld and Johnson, as he was funding Kasich?

I am confused. Why will the Libertarian ticket have more effect on the 2016 election than it did in previous years?

Because many conservatives, given a choice between Trump and Hillary, will vote third party. Libertarian is less noxious than the other options.

Let’s see. “L” party is pro-dope, pro-open borders, anti-military and depending on the phase of the moon, For and Against abortion. Yep, sounds like a “conservative” magnet.

I saw a definition of ideologically dominated pathology as someone who, after you have heard them answer a couple a questions, you can nearly always predict what they will say. Any thoughts?

Because the “L”ibertarians really really really really WANT to FEEL like they make a difference. That the “L” party could not manage a two car funeral procession does not limit their zeal. Kinda like the socialists keep hoping that SOME WHERE SOME BODY will actually get socialism to work.

What’s your take? They are pulling double digits in a three-way race and they didn’t even start campaigning.

He used the word “miasma” in his closing statement.

Huh? This is a problem? Is this a new trigger word? Or maybe a new code word for, say, the BLM crowd … the “people of miasma.”

Or is it a Politico thing, like saying “Nee!”?

Having suffered under Weld as governor, the fact that he would be involved in yet another Hindenburg-like event comes as no surprise at all.

Guessing he’s just there for the free booze, if past behavior is any suggestion.

…they are handing out joint buttons and paraphernalia…

Given Johnson’s recent employment history, I expected this to read “they are handing out joints.”

Ah, William Weld. Left the Massachusetts Republican Party a shell of its’ former self. And, in 1993, appointed the first ever official astrologer for any state in the union, Darrell Martinie, The Cosmic Muffin, bringing Massachusetts to the forefront of 16th century scientific beliefs. Great man to march to the future with.

I copy/pasted the above from a comment I made elsewhere. an you really take someone seriously when he appointed The Cosmic Muffin as an official state astrologer? I certainly cannot.

Faced with a non-career-politician on the Republican ticket, the Libertarians roll out two career politicians as an alternative.

rofl, you can’t make this stuff up 🙂

As Jerry Garcia observed..”what a long, strange trip it’s been” (and will continue to be”.

sTrumpets, please spare me the lecture……it hasn’t worked and will drive me even further away from your idol.