John Kerry Tells Students They Are “Graduating Into a Borderless World”

John Kerry Tells Students They Are “Graduating Into a Borderless World” 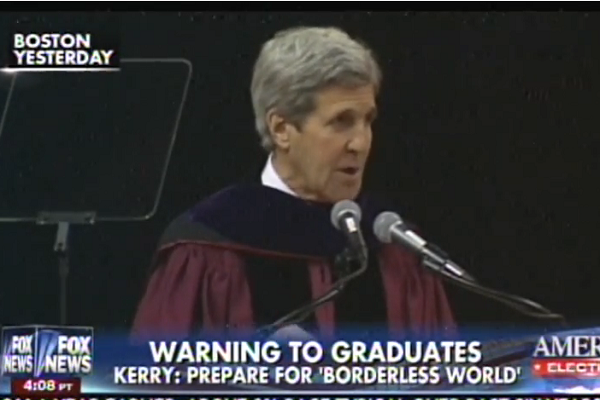 On Friday, Secretary of State John Kerry delivered the commencement address at Northeastern University.  During this address, he told the graduating class they are “about to graduate into a complex and borderless world.”

Kerry also seemed to dismiss the importance of national borders, and said technology has reshaped the world into one that the U.S. must engage at the risk of being left behind. He said Trump and others who want to look inward are making a mistake, even in the face of rising tension and violence in the world.

“For some people, that is all they need simply to climb under the sheets, close their eyes and push the world away,” Kerry said. “And shockingly, we even see this attitude from some who think they ought to be entrusted with the job of managing international affairs.”

“The future demands from us something more than a nostalgia for some rose-tinted version of the past that did not really exist in any case,” he said. “You’re about to graduate into a complex and borderless world.”

Secretary of State John Kerry took a shot at Donald Trump during his Friday commencement speech at Northeastern University, by saying no wall is big enough to keep dangerous terrorists out of the United States.

“Many of you were in elementary school when you learned the toughest lesson of all on 9/11,” he said. “There are no walls big enough to stop people from anywhere, tens of thousands of miles away, who are determined to take their own lives while they target others.”

“So I think that everything that we’ve lived and learn tells us that we will never come out on top if we accept advice from sound-bite salesmen and carnival barkers who pretend the most powerful country on Earth can remain great by looking inward,” Kerry added. “And hiding behind walls at a time that technology has made that impossible to do and unwise to even attempt.”

You can read his full commencement speech here.

Kerry is a big, fat liar. Most countries like their borders just fine, thank you very much, and work at maintaining them USING technology, international law, cultural norms and force when necessary.

What IS true is that people are becoming more linked, despite national differences, into a more common bond via social media and travel as the world becomes more wealthy via market transactions.

The democrats never use their brightest person as Secretary Of State.

Kerry is right: a wall alone (metaphor for much more stringent controls to keep American culture from being appropriated by Spanish speaking Hispanics)will not protect us from 9/11 type terrorists. That needs tighter oversight and control of the visa system

If Kerry’s ascertain were true, then Mexicans wouldn’t need to leave Mexico and illegally immigrate to the USA.

They could telecommute here instead.

Kerry seems not to understand that most people in the world do not share norms and practices taken for granted, and the world he envisions will be far from the land of milk and honey.

These students are also about to graduate into a world in which the Obama administration pays out hundreds of billions of dollars a year in food stamps, tax “credits,” and other welfare benefits to millions of illegal aliens.

These students are also about to graduate into a world where the Obama administration makes it cheaper for U.S. employers to hire illegal aliens and H1-B visa holders than U.S. citizen job applicants.

These students are also about to graduate into a world where the U.S. government has $19 Trillion in debt, hundreds of trillions more in unfunded liabilities; a world in which the Obama administration each year spends hundreds of billions more dollars than it takes in in revenue, and where tens of thousands of unskilled, uneducated, unvaccinated foreigners are flooding across our unguarded borders (and into our public schools, hospitals, and onto our welfare rolls) every day.

But yeah, Trump is the crazy one who can’t face reality. Not Obama and Kerry. Trump.

Mr. Heinz don’t even know ketchup. He & Hillary as SOS were among BO’s cruelest jokes. And there have been many.

The whole point of the wall is not to stop 9/11 style terrorists attacks. It is meant to put a damper on the rampant illegal back and forth immigration that occurs on that border to the tune of millions of people each year. Wall won’t stop it entirely, especially if we don’t ramp up border patrol, but it is an important step towards reestablishing control over our own borders.

Kerry has been stupid all his life.

His dismissal of the legitimate concerns of many, many normal American citizens is typical of an administration that is widely regarded, in this country and the rest of the world, as incompetent.

A world without borders, that denigrates individual dignity, and debases human life, selectively.

We really need a separation of [pro-choice] Cult and State.

If walls don’t work why are they adding onto the fence at the White House? Make it borderless now and until this admin is over.
And if fences are so bad, what would happen if we happened to visit the yacht club where kerry keeps that – what – $5+ million plus yacht of his. I’m sure he won’t mind thousands of (illegal alien) visitors to a borderless yacht club where he keeps his luxury boat…..

Kerry dreams of a world where there are no borders. People are only divided into two groups: the ruling elites and the peons.

there were no borders preventing him from mouthing off at the paris peace accord so he figures there should be none at all.

John Kerry: a man who has accomplished nothing, except to scam his way into the senate one time, and of course, the corrupt system allows him to rot there for the rest of his life at our expense.

His wife never made a dime in her life (her husband did) and nor did Kerry – other than to scam 200 million dollars by insider trading while in the senate.
http://insidertrading.procon.org/view.resource.php?resourceID=001580#kerry

A bigger f–king corrupt moron (other than Hillary Clinton) has never occupied the SOS’s highest office.

John Kerry is a fool and a poltroon, as well as a self-labeled war criminal. His record in Vietnam is not one of honorable service and his performance in front of Congress on his return from that war was a disgrace and a slap in the face to all of those who served; it was the ultimate denigration of all those who gave the last full measure of devotion over there.

I have asked this before many times and in many places and have never gotten an answer: How does such a male creature – I can’t really call him a man, can I – become the Secretary of State of this country? That he would be nominated by a Progressive ass like Obama is not a surprise, but how could he be confirmed by 100 allegedly intelligent Senators?

Can we get back from here? I’m no longer certain that the country can be saved.