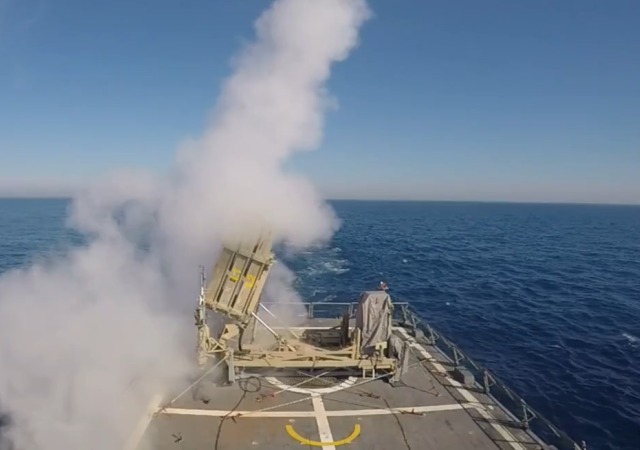 Israel has debuted a sea version of their successful Iron Dome to provide more protection from Hamas and Hezbollah.

The sea Iron Dome will also protect the natural gas fields off the coast of Israel. The discoveries led to a $15 billion deal to supply Jordan with natural gas.

The natural gas has the ability to propel Israel into an energy superpower.

Col. Ariel Shir, the Israel Navy’s head of combat systems development, said the live fire test was conducted two weeks ago using the Adir radar developed by Israel Aerospace Industries/Elta and the Rafael-developed Iron Dome, both of which were integrated aboard the service’s INS Lahav Sa’ar-5 corvette-class surface vessel.

“I can say all the threats shot toward our assets were targeted by the Adir radar — one of the most advanced naval radars that exists today — and interception was accomplished by Iron Dome,” Shir told reporters Wednesday.

Shir declined to specify how many or what type of threats were intercepted by the new sea-based defensive system, but sources indicated that the test targets were versions of the 122mm Grad.

Instead, the successful tests show the country has “an immediate answer” “to defend offshore assets.” Terrorist group Hezbollah owns many “surface-to-sea missiles, with ranges up to 300 kilometers.” The group can use these missiles to attack the rigs, but also huge Israeli ports. They can reach these ports if they set up launching pads on the Lebanese or Syrian border.

Experts have found that the Tamar and Leviathan fields are worth $25 billion. Houston-based Noble Energy knew Hezbollah would target the rigs so they started working with the Israel Defense Forces (IDF) for protection. In 2015, Israel signed contracts with Germany to purchase warships worth $480 million.

Shir said Israel will stock these ships with the sea-based Iron Dome and the Barak-8 defense system, which is used “against sea-skimming and cruise missile threats.”

Uzi Rubin, the former director of the IDF, agreed Israel should keep using assets they already own since it makes “for a very affordable and immediate answer to the rocket threat.” A former Israeli industry executive commented that the systems might overlap at times, but in the end it will save them money instead of just relying on the Barak-8 system.

“We are expanding our operational capability well beyond the borders of the sea. We can take part in ground combat, and we have a sea superiority concept that calls for accurately striking the enemy.”

Excellent! Israel needs its new-found energy assets, and it will defend them against the haters of the ME.

If I were defending these platforms, I think I would be less worried about the Grads due to them being dumb (but still fairly accurate) and somewhat more worried about sea-skimming cruise missiles, but my biggest worry would be some terrorist stuffing a ship full of explosives and trying to ram. Hopefully they will set up an exclusion zone around the platforms, at least.

Notice how timely this announcement is? I would not be surprised if it corresponds fairly closely with something under active discussion within Hezbollah. Other scenarios are possible, of course, but the Israelis chose to talk about this one.