Did they or didn’t they? 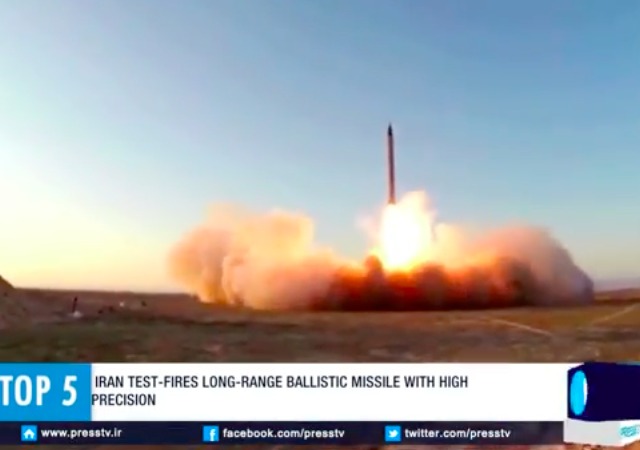 “Two weeks ago, we test-fired a missile with a range of 2000 kilometers and a margin of error of eight meters,” declared Brigadier General Ali Abdollahi. “We can guide this ballistic missile.”

“We haven’t recently tested any missile with the range of 2,000km and with an 8-meter-margin of error,” he announced to reporters in Tehran.

“We’re still trying to get to the bottom of what exactly transpired,” said White House Press Secretary Josh Earnest when asked about the reports.

The regime shot off medium-range missiles in March, but the United States would not say they violated the resolution. The army launched those missiles “from the east Alborz Mountains, north of Iran, and hit targets on the Makran coast to the southeast along the Pakistan border.” Someone wrote “Israel should be wiped off the Earth” on one of the missiles.

The U.S. and Europe took the same position when Iran fired launches in October and November. Those actions, though, led to sanctions on “11 Iranian entities in January” by the Treasury Department.

“We remain deeply concerned about Iran’s ballistic missile test-launches, which are provocative and destabilizing,” commented one senior Obama administration official on the Iranian reports. “These launches are inconsistent with U.N. Security Council Resolution 2231, in which the Security Council called upon Iran not undertake any launches of ballistic missiles designed to be capable of delivering a nuclear weapon.”

Scanning the headline, I thought the that US government denied it.

State Dept: No worries. Obama and Kerry will fix the problem.

Is it too late to make Netanyahu a natural born US citizen who is eligible for being our president?

“We haven’t recently tested any missile with the range of 2,000km and with an 8-meter-margin of error,”

Obama replies:
Of course you didn’t!
(Whispering) The range was really 1,739km with a 153-meter-margin of error.
It’s OK. We’ll look the other way again.

President Obama is reported to have said, “This is not a threat to this country because we are not on the metric system, we use miles, not kilometers.”

“Did they or didn’t they?”
Of course they did, and if they didn’t they soon will.

I wouldn’t be too worried about the accuracy.

By ‘high precision’, they mean it’s capable of hitting a target the size of Obama’s ego.

A target that big, anyone can hit it. Even the North koreans.

Of course they didn’t have a missile test, Ben Rhodes told us they didn’t!

Of course they did’t! I mean it wasn’t their missile that they tested, they bought it elsewhere.